CEO on the Go 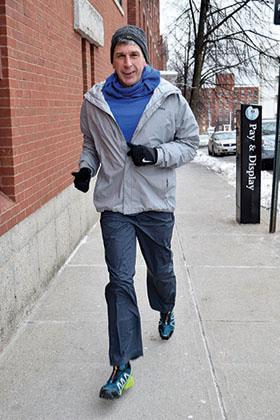 Editor’s Note: This is a series of interviews Associate Editor Erika Cohen conducts with CEOs and executives who are running enthusiasts. It is a chance to hear what executives have to say when they take off the suit and put on running shoes. The stories are published the first Wednesday of each month online. Want to go for a run with Erika? Contact her at ecohen@Businessnhmagazine.com.

Before Mike Jurnak worked for Berry Dunn, a CPA firm where he is a principal and head of the Manchester office, he owned a bed and breakfast with his wife, also a CPA, in Vermont. The first winter they owned it, there was a chimney fire and Jurnak, who had never heated with wood, called the fire department. Three hours later the volunteer fire department had saved the inn. Grateful, Jurnak decided to giveback by joining the fire department—for the next eight years.

“I knew no one up there then. There was no way to pay that debt other than to join and to contribute to the community,” he explains while running through Manchester. “I had to pay back the debt I owed to the fire department for saving the house.”

So how did he end up owning a bed and breakfast? He got burnt out working at a big accounting firm in Boston working too many hours under a lot of stress. “I was looking around thinking, ‘I don’t want this kind of life,’ so we bought a bed and breakfast. Remember the Bob Newhart show? Yes, that was us.”

Kind of, that is. Instead of having a side career on local TV like Dick Loudon, Jurnak also worked at a small CPA firm in Vermont. He also helped a renewable fuels company go public and after selling the inn, he and his wife started their own CPA firm in Vermont.

What Jurnak liked in Vermont was similar to what he found in NH: Less traffic, a good economy and high quality of life. Jurnak takes time three days a week to run or attend a boot camp class, something he also supports his employees doing. That is especially true now during the tax season, when he and his employees are working 12-hour days.

“It’s so easy to say I’m too busy to work out. And the excuses can pile up but I know after we run today, and of course after a shower, I will go back to the office and have four very productive hours because I have cleared my head and had a great run with someone,” he explains.

We start running downhill and he suddenly stops mid thought to recall a previous run on this hill when he pulled his IT band (the ligament that runs down the outside of the thigh from the hip to the shin). “It really gave me heck.” For the record, this is a running thing. Most runners can recall the spots where they were injured. I can tell you the exact place I twisted my ankle a few years back.

Jurnak is mostly a solitary runner, but he sometimes runs with his 15-year-old son (he also has a daughter in college). He usually runs about five miles. He also likes skiing, and in the summer waterskiing, both activities he does with his family out of their cabin in Vermont. And while his running is mostly alone, his business life is focused on relationships with employees and clients.

Jurnak works as a commercial CPA, helping family businesses, start-ups and other closely held firms with finances, business development and business planning. While accounting is considered a numbers profession, Jurnak says, “There are so many more core competencies other than just technical ones. We take the very long view of client relationships … We’ll find ways to give them value beyond the audit and tax work.” He describes all of his clients as entrepreneurial, as he identifies himself.

He spends a lot of time working with employees to create the next generation of leaders, a process he says will eventually put him out of a job, but that is the intent. “I get the folks around me to move up and become senior managers, principals and that will help us grow. To me that is a measure of our success: to see them grow and become the very best professional,” he says.

For now, it being tax season, everyone at the firm is very busy. But when his time does come to step down, he will likely run more. “Quite honestly, when I am home, if I’m bored and have excess energy I’ll go for a quick run."

The Changing Religious Landscape in the United States