CEO on the Go: Michael L'Ecuyer

Editor’s Note: This is the sixth in a series of interviews Associate Editor Erika Cohen will conduct with CEOs and executives in the state who are running enthusiasts. This is a chance to hear what executives have to say when they take off the suit and put on running shoes. Want to go for a run with Erika? Contact her at ecohen@BusinessNHmagazine.com. 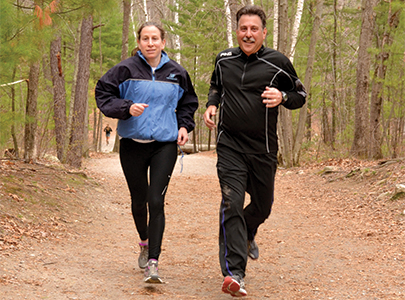 Bankers are natural strategic planners, yet little of Michael L’Ecuyer’s major life events was part of a plan. In need of a job after college, he interviewed for a bank debt collection job at a campus job fair. “It came with a company car and a salary higher than I expected, and that’s all I heard,” L’Ecuyer says. When his daughter was born the year he turned 40, it was an “unexpected but wonderful blessing.” Running was something he had done on and off, but it was only when his younger sister died of a heart attack at age 48 in 2010 that he took it up seriously.

He recalls these stories while running laps on the dirt path around Livingston Park across the street from Bellwether’s Manchester headquarters. “These four or five laps are my personal time, my reflection time. I run alone. I love it.” Plus, he says, “I have no excuse. I have shower facilities and a trail across the street.” Having been recently sidelined with a calf and achilles injury, he is happy to be running again pain free. After taking four months off, he has built back up to 25 miles a week.

Running may be the only time L’Ecuyer seeks solitude. Otherwise, he spends much his time helping others. L’Ecuyer spent 486 hours volunteering for eight boards and organizations in 2014. “I find I inevitably end up meeting some of the most interesting people on the planet volunteering. People who volunteer realize life is bigger than themselves. I’ve met some of my best friends through volunteer work,” he says. “The best leaders are those who find time in their busy lives to give back. We interview with that in mind.”

One of those organizations is the Make-a-Wish Foundation, where he helps with fundraising and often brings along his wife and now college-aged daughter. On our third lap around the park, he tells a story about her senior project in high school. “One of my proudest moments of my life was when she chose to do her senior project on Make-a-Wish on her own,” he says. Her project looked at the impact fundraising for a charity had on wish kids, staff and families. “She made her presentation and there was not a dry eye in the house when she was done.” L’Ecuyer is so caught up in the story of his daughter, he does not notice a root that trips him. He quickly recovers, stands up and presses on with the run and the interview.

It’s that kind of tenacity that has served him well during his 30-plus year career in the banking industry, during which he has worked for stockholder banks and credit unions. He prefers community banking. “Bigger banks tend to make decisions based on portfolios. At the end of the day, every one of those loans are important, and we may be able to work a little differently with somebody because of the size of the company. We get to know them better,” he says.

His first job in banking, collecting bad debts, helped him become a good lender, he says. “Just because somebody is past due on a loan doesn’t mean they are bad people. Most of them will pay and follow up on their obligation, which is a good lesson to learn as a young banker. It’s easy to forget,” he says.

L’Ecuyer checks his Garmin timing watch as we finish. He has run five half marathons since seriously taking up running and is planning on a sixth this fall. His previous best time is 1:49:01 (8 minutes 20 seconds per mile, he quickly adds.) This time around he has a more modest goal. “I just want to break the two hour mark. Nine minute steady pace.”