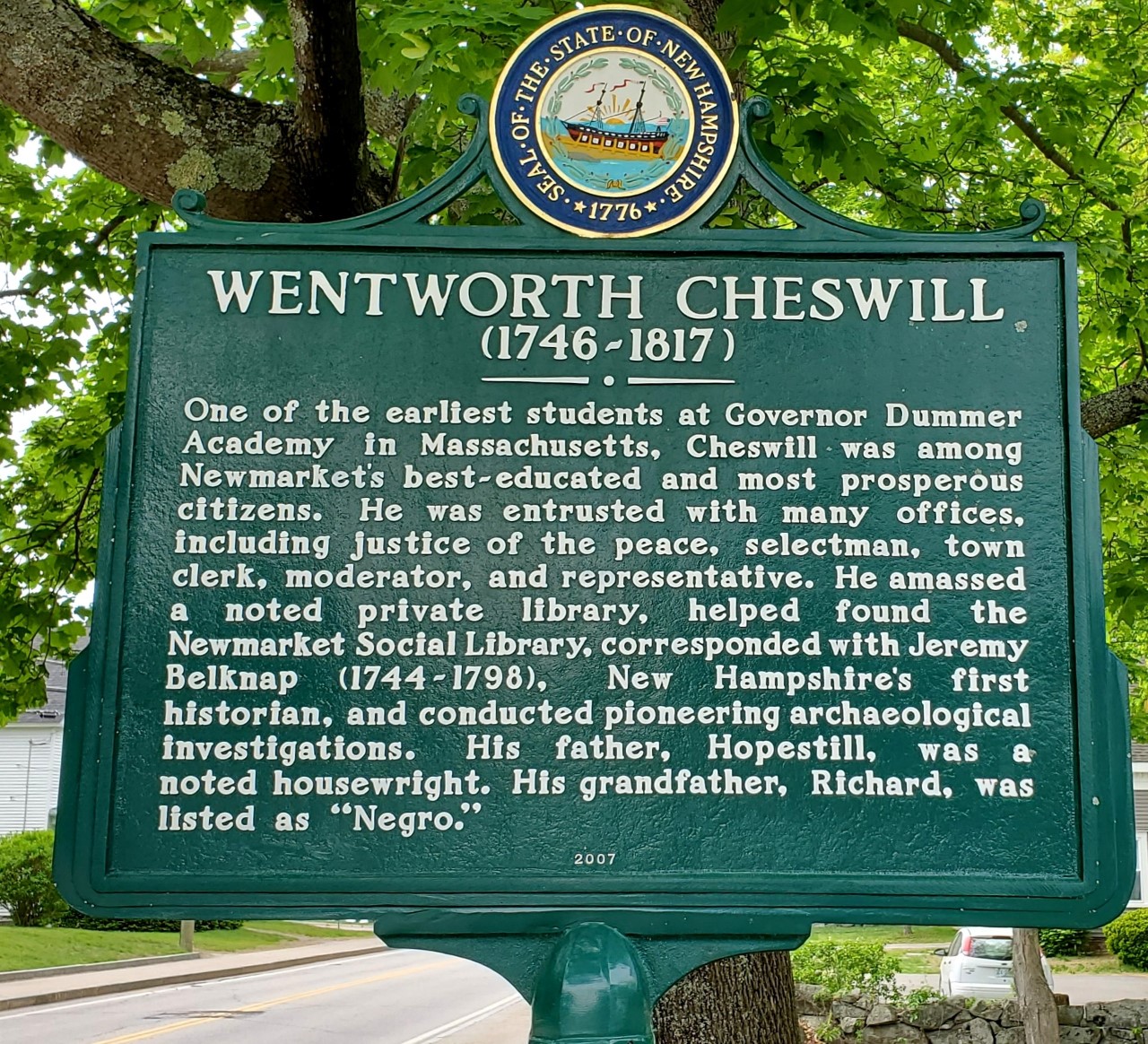 Nearly 30 years ago, Charlotte DiLorenzo moved to Newmarket from Massachusetts, where she had lived her whole life. The lack of racial diversity in her new home state was nothing less than culture shock for her.

“I lived in Beverly, I grew up in Lynn, I worked in Boston. I was sort of used to being in diverse communities and being around a lot of diverse people,” DiLorenzo, who is Black, said. “Things were so different.”

Unknown to DiLorenzo at the time, and to many New Hampshireites today, the same Granite State that Dilorenzo met in 1993 is home to the nation’s first African American person elected to public office — in 1768.

“When I first moved here I thought, ‘What am I doing here?’ There weren’t any Black people around,” DiLorenzo, who is now a three-term state representative, said with a laugh. “So when I heard about Wentworth I just thought, ‘My goodness, how could we not know about Mr. Cheswill?’”

Wentworth Cheswill, born April 11, 1746, was elected to public office in 1768 as town constable of Newmarket. He went on to serve in local offices every year of his life — except for one — until his death in 1817.

“He’s a hidden figure,” DiLorenzo said. “He was this tall, giant part of the Revolutionary War and a giant part of Newmarket, but most people have never heard of him.

[Want to learn more about Wentworth Cheswill and other pending legislation. Watch this episode of NH PBS’s The State We’re In. (The first half of the show is a legislative roundup with Anna Brown at Citizens Count. the second half is an interview with Jenny Whidden on Wentworth Cheswill.)  Watch the Video ]

In a state not known for its diversity, Cheswill’s staggering legacy meant something to DiLorenzo. With the figure’s 275th birthday falling this year, the Newmarket Democrat set out to “get the word out that people of color have made meaningful contributions to this state.”

Earlier this year, DiLorenzo authored a bill that would make April 11 Wentworth Cheswill Day. The legislation, originally meant to mark Cheswill’s birthday annually, was amended at the House committee level to limit the commemoration to just one year due to concerns that observance days often get buried in the statute and forgotten.

Executive Departments and Administration committee chair Rep. Carol McGuire, (R-Merrimack), said she believes the process is more productive when a group works to celebrate the day by requesting the governor issue a proclamation each year.

“We want it to be something that people are excited about and they get involved in,” McGuire said. “Our concern is more that when an organization or a group lobbies the legislature to put it in statute — they won and they stop working.”

Because the bill did not move through the legislature before April 11 of this year, the Senate approved the legislation earlier this month after creating an amendment to celebrate Cheswill’s 276th birthday in 2022.

DiLorenzo said though she had to compromise on her original vision, she feels grateful the bill passed both chambers. The legislation is currently awaiting Gov. Chris Sununu’s signature.

“(I hope) that more people know about him and honor his accomplishments,” she said. “I think he’s a real great example to our youth — youth of all races, colors and ethnicities — that you can make change. You can serve your state.”

JerriAnne Boggis, executive director at Black Heritage Trail of New Hampshire, said remembering stories like Cheswill’s can go a long way in breaking stereotypes and being accountable for the erasure of Black history.

“We tend to tell a one-sided story of our history which preferences one race over another. We don’t tell the truth,” Boggis said. “When you look at these stories, you find that Black folks, people of color, Native Americans, were human like everybody else, and were doing what they could to be good citizens. They were inventors, they were literates, they were valuable citizens in creating the fabric of a culture of the town that they lived in, and Wentworth Cheswill was one such man.”

DiLorenzo’s bill was first inspired by an effort in Newmarket to celebrate Cheswill’s 275th birthday by the Wentworth Cheswill Appreciation Society, founded by local artist and teacher John Herman.

Ten years ago, Herman was driving through Newmarket, where he had recently moved, and happened upon a historical marker for Cheswill. The marker was erected in 2007 through the efforts of longtime resident Rich Alperin, who had done years of research in rediscovering Cheswill’s legacy.

The marker reads that Cheswill “was among Newmarket's best-educated and most prosperous citizens,” and that he “conducted pioneering archaeological investigations.”

Intrigued by the marker and finding there wasn’t a definitive book or resource on Cheswill, Herman went down a rabbit hole, digging deeper and deeper into Cheswill’s life and embracing this new hobby that eventually led him to pursue a children’s book about Cheswill, create education curriculums about the figure and found the appreciation society.

“To study his life gives you a different perspective of early America, and I just found that really exciting,” Herman said.

Cheswill was the grandson of a formerly enslaved Black man Richard Cheswill, who after buying his freedom completed the first purchase of New Hampshire land by an African American.

Wentworth was born to Hopestill Cheswill and Katherine Keniston, who was white. Hopestill, a house carpenter, built the John Paul Jones House and Stoodley’s Tavern, both located in Portsmouth.

Cheswill attended secondary school at what is now known as the Governor’s Academy in Massachusetts, a formal education that historians note was rare in colonial New England.

Among the positions Cheswill occupied were selectman, auditor, assessor, justice of peace and — during the Revolutionary War — on the town’s committee of safety. Similar to Paul Revere’s famous midnight ride, Cheswill is known to have ridden as town messenger to carry news between Newmarket and Exeter.

“Cheswill is the epitome of inspiration for anyone in public service,” Herman said. “He was so many different things for his town and state. (He) was just this inspiring statesman, public service dynamo.”

When Revere rode north to warn Portsmouth of two British warships, Cheswill rode to Exeter to get orders for his town. During the war, Cheswill fought at the Battle of Saratoga directly under John Langdon, who went to Philadelphia and helped write the Constitution.

“He was connected with people that were literally writing the U.S. Constitution,” Herman said. “It keeps going and going. Wentworth Cheswill is almost like the Forest Gump of early America. If you’ve seen the movie, there’s this sequence where Forest Gump is at all these famous historical moments, but no one ever knows, and that’s Wentworth Cheswill.”

As Cheswill’s life and legacy has become more widespread, an effort has grown in Newmarket to erect a monument to commemorate the figure.

The community has raised over $8,000 toward a goal of $25,000-$35,000, but the pandemic slowed things down, Herman said. Now that the Newmarket Historical Society has begun in-person meetings again, Herman said he hopes the project will regain momentum.

“When people are tearing down statues and reevaluating what we want to remember and immortalize in our communities, more and more people have come to me over the years and asked, ‘Why isn’t there a Wentworth Cheswill statue?’” Herman said.

In a similar effort, Alperin dreams of one day having one of the town’s roads renamed for Cheswill.

Alperin, in addition to bringing Cheswill’s historical marker to Newmarket, has ensured the Cheswill family cemetery has been maintained since he became interested in the historical figure in the early 2000’s.

He said he first learned of Cheswill when he received a letter from the wife of a Cheswill descent who wanted to know whether the cemetery was being cared for. In an unexpected turn of events, the woman had sent the letter to Alperin because his home was built on the very same foundation that Cheswill’s mansion once stood on.

“When I started reading about all the stuff that this guy had done, nobody in town knew him and nothing had been done to remember him,” Alperin said. “All of my efforts were toward exactly what is finally happening now, which is everybody is talking about Wentworth Cheswill.”

Linderman, who is writing a dissertation on people of mixed ancestry in early America, said it is critical that people understand there were both free and enslaved people of color in a Northern state like New Hampshire.

“While Wentworth Cheswill was a justice of the peace — clearly he was educated, he was well-read — he would have seen runaway slave ads in the local newspaper,” Linderman said. “He knew how some people of color were treated, and he knew that enslaving people was a very real thing that was happening all around him.”

A key part of Linderman’s dissertation is to recreate the community Cheswill lived in and understand how people felt about people of color in the late 1700s and early 1800s.

“How much did performing whiteness matter? If you were educated, if you were pious, if you fought in the Revolutionary War, if you served your community — did these things make it more acceptable to be a person of color?” Linderman asked. “Because Wentworth Cheswill did all of those things. … There was no end to this guy. You name it, and he did it.”

Linderman said for all intents and purposes, Cheswill lived his life passing as a white man. Because he listed himself as white in the three federal censuses he took part in — mixed race was not an option until 1860 — the only record of Cheswill being recognized as a person of color came three years following his death.

In 1820, New Hampshire senator David Morril stood on the Senate floor in Washington D.C. to give a speech during debate about the Missouri Compromise, which would allow Missouri statehood as a slave state and prevent free African American people from settling in the state. He described Cheswill as “yellow,” and named him as an example of an upstanding citizen of mixed race.

“It was sort of the early 19th century version of ‘I’ve got a Black friend,’” Linderman said.

Whatever the extent Cheswill’s ancestry affected his life, the question of why his legacy was lost for nearly a century before Alperin got that letter in the mail remains unanswered. But the Newmarket resident has his own theory.

“They try to keep African Americans and their achievements squashed down so nobody knows about them,” Alperin said. “I just felt an obsession, naturally, that the town and everybody else needed to know what this guy did. He was an incredible human being. He donated his life to the town of Newmarket, and people need to know that.” 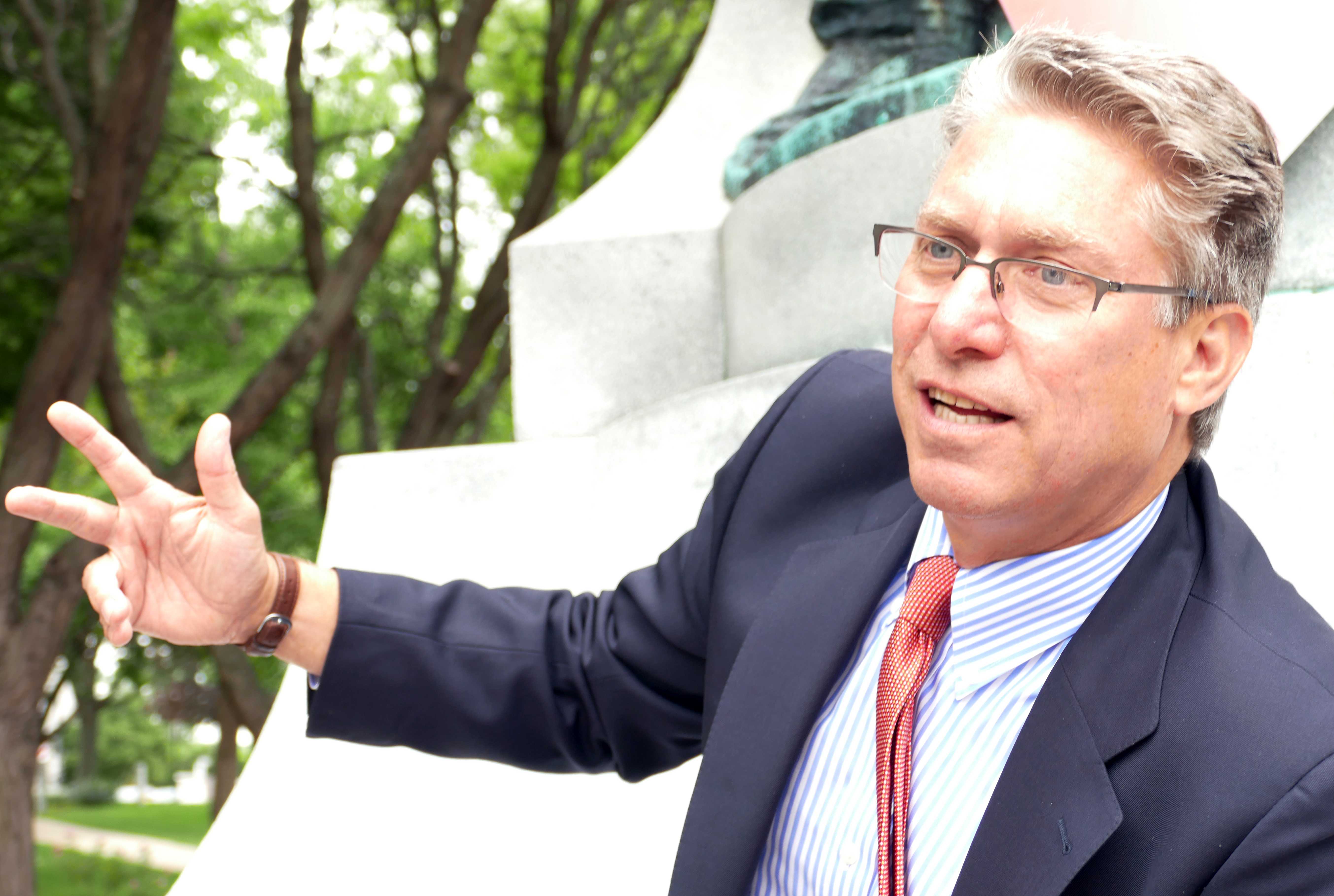