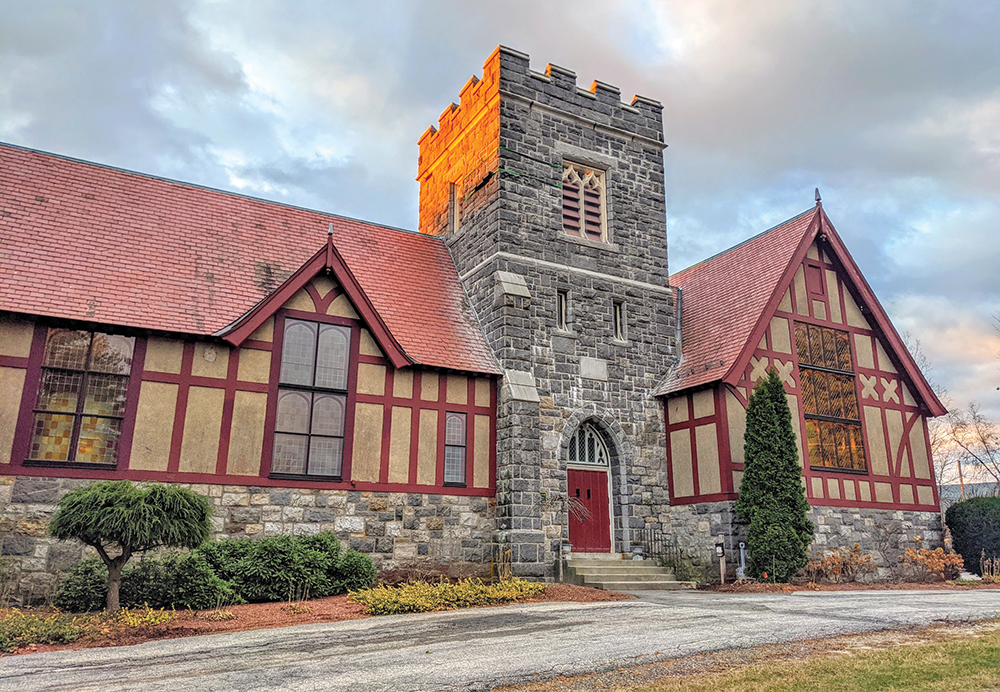 Searles Castle. (Courtesy of the town of Windham).

The affluent community of Windham boasts a highly educated resident workforce, a quality school district and easy access to the Interstate 93 corridor and the Greater Boston metro region. It would seem an obvious choice for locating a business. But infrastructure limitations and a general anti-large-scale-business sentiment among residents means the road to future growth is a narrow one.

The town looks like a classic bedroom community with 92% of its land use dedicated to residential and only 8% to commercial, according to the town’s 2005 Master Plan, the latest estimate available. “It probably hasn’t changed much since then,” says Community Development Director Alex Mello.

While small, Windham’s business sector is vibrant, mostly located along the Route 111 corridor that cuts east to west through the center of town, as well as parts of Route 28 that run north to south. “It’s tempting to consider us a bedroom community,” says Kristi St. Laurent, chair of the town’s economic development committee. But St. Laurent says if you “peel it back” and look closer, you find a community with close to 400 small and medium-sized businesses.

The town is home to more than 15,800 residents as of the 2020 census with median household income of $148,459. That’s particularly high compared to the statewide median of $76,768. Those demographics influence the kinds of businesses that are established there. 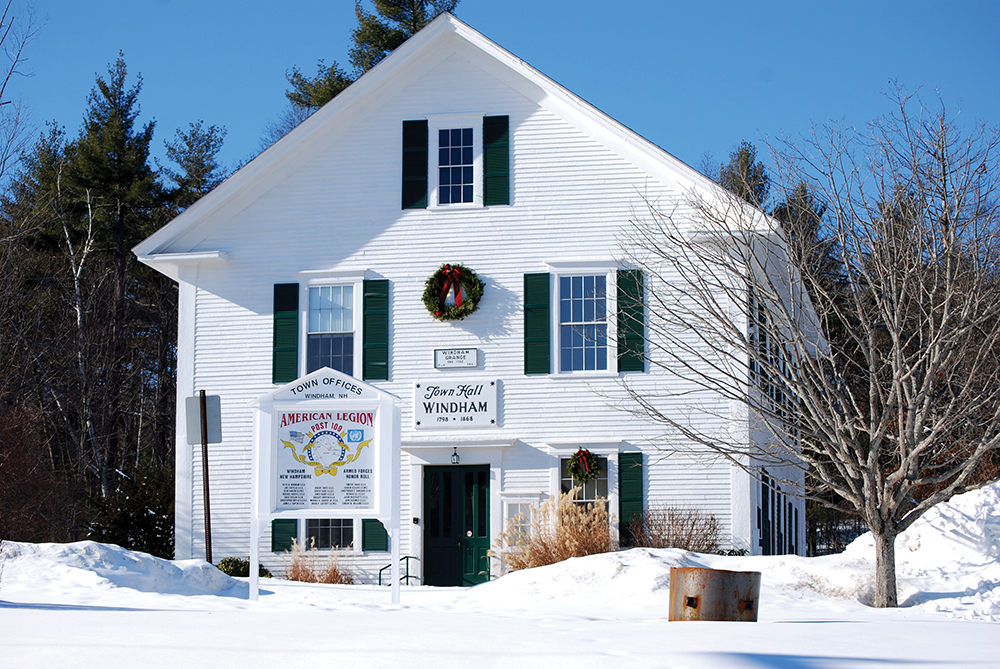 “There’s a lot less franchises. It’s very much more of a creative industry, or unique, one-of-a-kind type shops,” says Donna Morris, president of the Greater Salem Chamber of Commerce. She says businesses tend to market to a niche clientele with more disposable income. And since they’re competing with nearby Salem’s retail destinations, entrepreneurs in Windham usually target an otherwise unfilled area of demand.

“To succeed in Windham, I think you need to come up with something that isn’t offered elsewhere,” Morris says.

With an estimated 75 businesses from Windham that are chamber members, the town represents the second largest member constituency, tied with a conglomeration of businesses from various Massachusetts towns, according to Morris.

Lack of Large Businesses
Conversely, there aren’t many large businesses in town. “I think we have some good assets, townwide, in the sense that we are located in a strategic position along 93, and just being within the Greater Boston Metro Area, that has some benefits as well,” Mello says. “But it seems like we have a gap in that respect, compared to some of our neighboring towns like Salem and Londonderry.”

“From an economic perspective, we have really a unique experience here in Windham when you look at our neighboring communities, which is we don’t have a large industrial base that supports town infrastructure and services,” Earley says. “Windham is largely absent that.”

While Windham’s close proximity to I-93 makes it an attractive location, a relative lack of municipal water and sewer is a barrier for many developers seeking to place a larger scale business. Certain light manufacturing or food industry businesses like breweries usually require water and sewer and will tend to look elsewhere when they realize they can’t connect in most places in Windham. This could also be a limitation for potential high-density multi-family housing developments.

Some parts of town recently connected to the Manchester Water Works system through the new Southern NH Regional Water project that extended a pipeline along Route 28 south from Derry through Windham, Salem, Atkinson and Plaistow. “On 28, it could potentially help us with our business development,” St. Laurent says.

There are also geographical concerns for prospective developers. Shallow ledge would require blasting to reshape the landscape, and some key parcels zoned for commercial uses are located between two major water bodies (Canobie Lake and Cobbetts Pond), which present concerns about impermeable surfaces and the size and proximity of septic systems.

Limiting Large-Scale Development
Some of these limitations are by design. An opportunity to extend the water line up to Ledge Road was voted down by residents with a 70% majority, according to Heath Partington, the chair of the Windham Board of Selectmen, who supported the water extension proposal.

Residents have also been vocal about their opposition to big-box retail or other large-scale developments, in contrast to neighboring Salem, which is home of the massive, mixed-use Tuscan Village development and its sizable retail sector.

“Recently, I think we’ve seen a lot of pushback to larger developments,” Partington says. “Certainly, the town’s never been in favor of big-box type stuff. But lately, we’ve seen even smaller stuff being looked at with a keen eye by the community.” 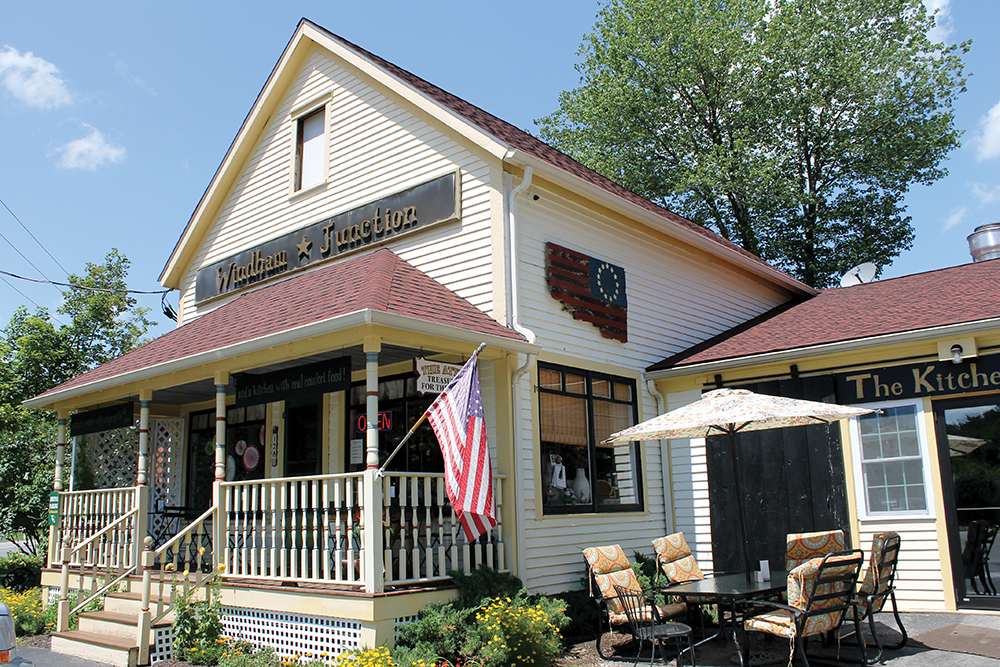 Windham Junction is one of the many small businesses in town. (Courtesy of Greater Salem Chamber of Commerce)

Windham ranked high among communities in the state that have the most regulatory barriers to building new market rate housing developments in an October report issued by the Josiah Bartlett Center for Public Policy.

Earley says he championed a warrant article that passed with a large majority to raise $6.2 million for conservation easements, not tied to any particular property. Critics fear it would be used to stifle development by buying up land that would otherwise be available for development, but Earley says it’s about balancing development with expanded public parks, access to natural resources and protection of environmentally sensitive marshlands.

And the fact is, the town has limited space for commercial endeavors. “We are certainly running out of space,” Earley says of developable land. “But the lots that we have left we think have the potential to blend nicely with the culture of the town.”

Mello says there are 191 parcels zoned for commercial and industrial development in Windham, of which 26 (a total of about 184 acres) remain undeveloped. And projects are getting built. Over 100,000 square feet of commercial development have either been recently approved by the Planning Board or are in later stages of permitting, according to Mello.

A Penchant for Professionals
So far, the Planning Board and residents have tended to approve smaller mom-and-pop retail developments, service-oriented businesses that cater to the local community and professional offices with high quality jobs.

St. Laurent says the 2015 relocation of the medical recruitment company Medicus Healthcare Solutions to Windham from Salem was a coup for the town. The company ended up building a three-building campus on Roulston Road near the rail trail. “It’s turned out to be a very successful location for them,” St. Laurent says.

Employees at Medicus Healthcare Solutions, which moved to Windham in 2015. (Courtesy of Medicus)

More recently, Earley says the Planning Board approved the development of a new dermatology office in its Gateway Park, which he called a “fantastic fit.”

These types of businesses also have no problem finding highly trained employees nearby. Mello says Windham residents are highly educated. According to 2019 American Community Survey data, 97.4% of residents have a high school diploma or higher and 57.9% of those 25 years or older have a bachelor’s degree or higher.

But that doesn’t mean the town will exclusively invite medical offices to set up shop. “Medical is not a direct hit. It’s not a silver bullet,” Earley says. “It’s finding those situations that allow us to fit in as good neighbors to surrounding communities and also serve the residents of Windham in the most efficient way.”

A Challenge of Balance
Partington thinks there is probably a need to revisit some of the zoning codes to better reflect the demands of the market, since office spaces are less in demand these days. Striking a balance between business and residential development has been a challenge for the town, he says.

When Windham started its own high school, there was renewed interest in fostering more business development in order to lessen the burden on homeowners to fund the school district. Morris says the Chamber helped create Windham’s first economic development committee during this time.

Partington says that’s partly because the town has managed to keep the budget fairly lean. Home values in town also skew high, which helps keep tax revenue up. According to the real estate web service Zillow, the typical home price in Windham is $707,503 as of March.

But Mello says without commercial growth, the tax rate is likely to be affected, and homeowners will be left holding the bag. “Towns need to grow, or they die,” Mello says. “I think, just generally, people don’t like change, especially in older New England towns.” 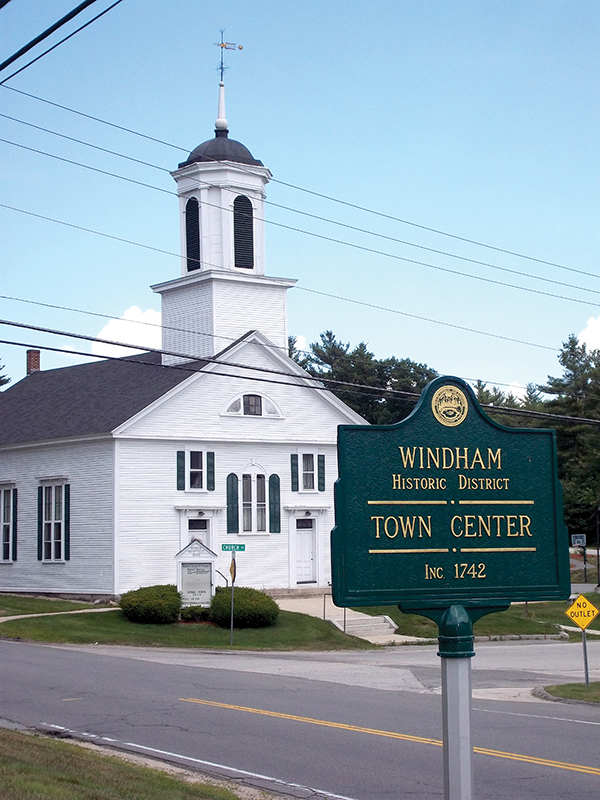 Need for a Development Plan
One of the things town officials have struggled with is a lack of a clear strategy for economic development. The last Master Plan was approved in 2005, and a recent warrant article to fund a new one failed by one vote this past March.

However, the town has asked the board of selectmen to approve the use of federal American Rescue Plan Act funds to hire a consultant to craft an Economic Development Plan. “Longer term, looking a lot further ahead, I think the community, as a whole, needs to have a conversation about what the vision is for the future, about economic development and commercial growth,” Mello says.

Partington says the town needs to figure out what kinds of businesses it wants to attract. “Instead of saying no to the things we don’t like, I think we need to better define what we do like,” he says.

Diversifying the housing stock to allow for more affordable market rate rentals as well as workforce housing is another way to keep the town’s economy healthy, Mello says, but figuring out a way forward in that often-contentious arena would probably be best handled in a Master Plan process. 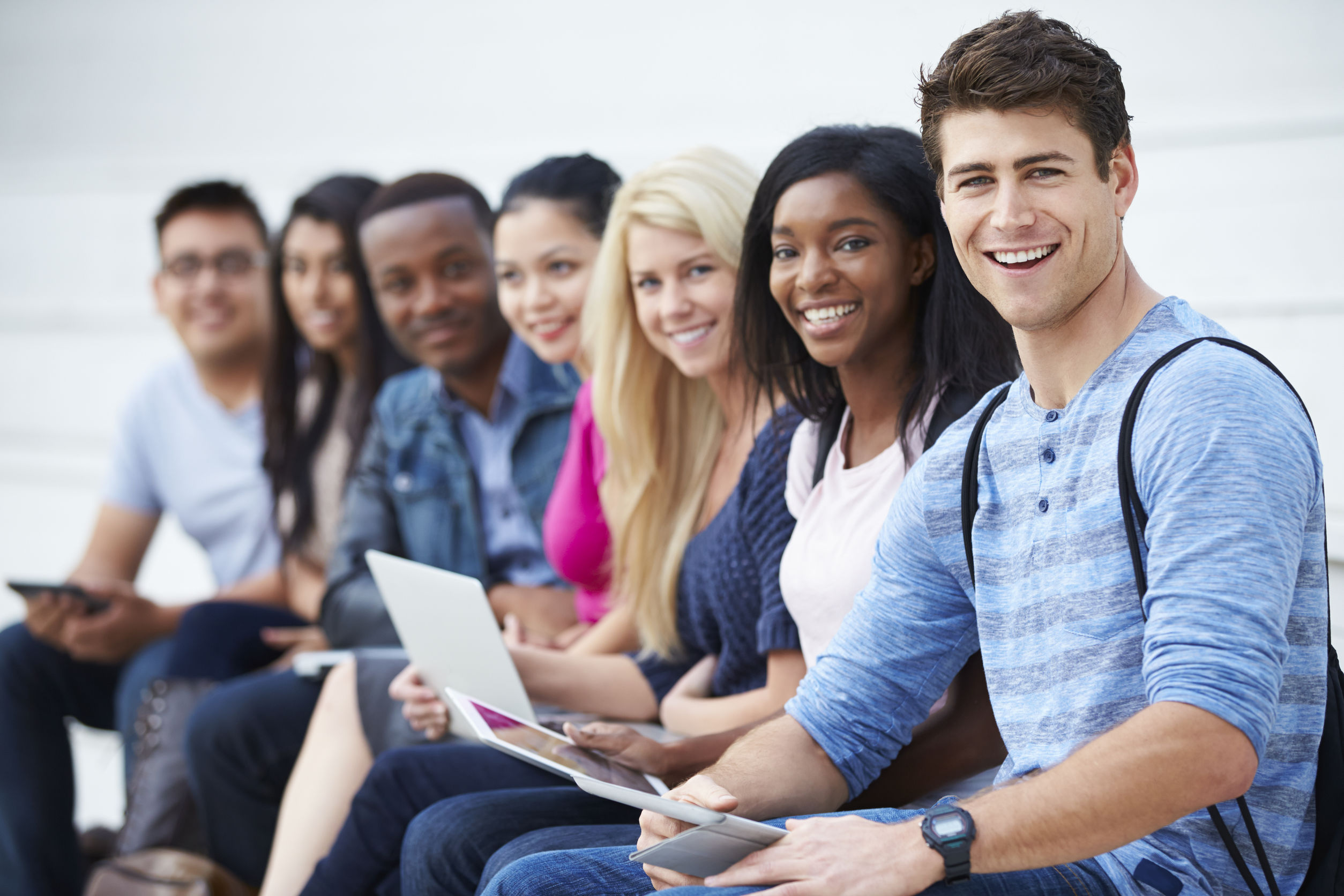 UNH Seeks Businesses to Partner with Students on Projects 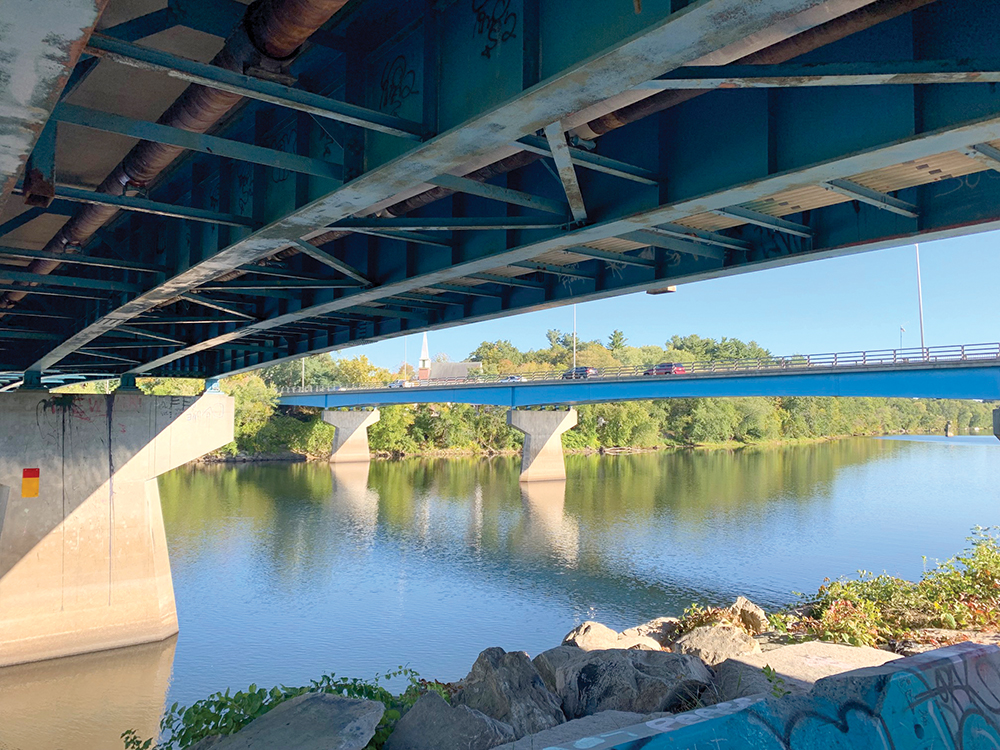 Hudson Among Hottest Communities in Nation