To LEED or Just Go Green

As concerns about climate change mount and businesses seek ways to become more efficient, they are investing in buildings that lower their environmental footprint. Some though, go well beyond basic green practices to achieve stringent standards for sustainability through LEED certification.

Meeting those standards takes a high level of commitment and investment. Since the nonprofit U.S. Green Building Council created LEED certification in 1993, just over 100 buildings in NH have been certified, including office buildings, stores, military installations, factories, libraries and even a state liquor store. 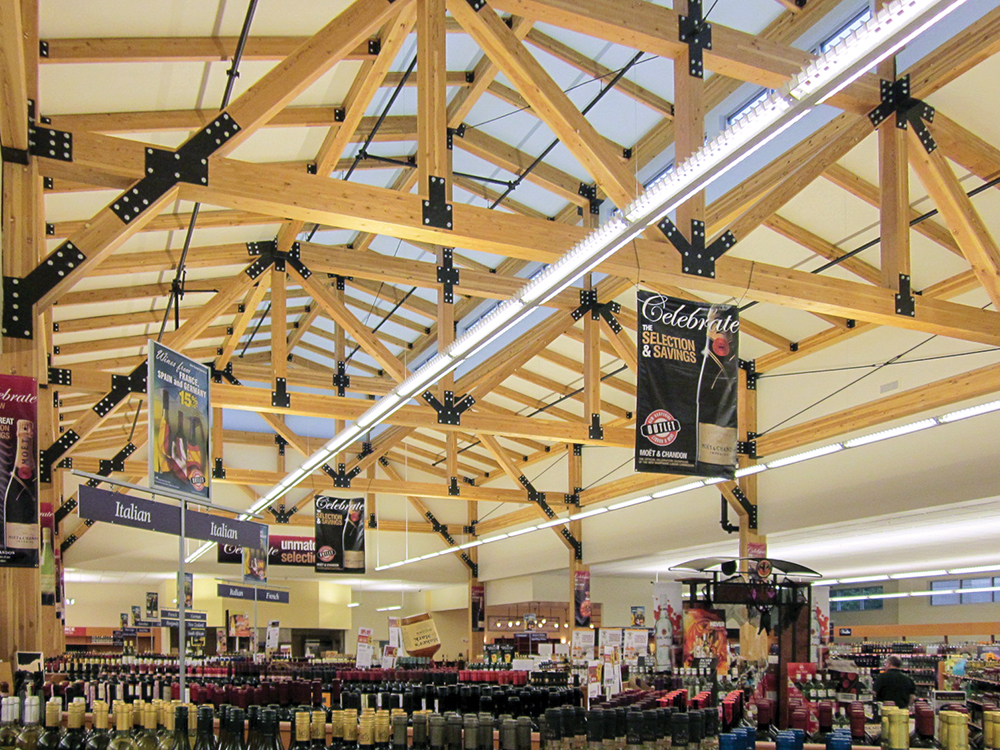 LEED stands for leadership in energy and environmental design and has become a globally recognized designation of sustainability. And while building to LEED standards creates more energy-efficient buildings and significant energy savings, it can be an expensive investment. And as more building owners have incorporated greener practices over the years, LEED certification has become more stringent to stay ahead of the curve. Preston Hunter, vice president of Eckman Construction in Bedford, says as energy-efficient buildings have become the norm, the need to pursue certification has diminished. “My sense is that you get the highest return on investment at the base certification level, but reaching higher means diminishing returns,” dollar for dollar.

Even if companies elect to forgo the certification process, many are building to LEED standards for social, environmental and economic reasons. Scott Hughes, an architect and project manager with Oak Point Associates in Portsmouth, which designs sustainable projects, says while a client may want to embrace LEED practices, they may not want to pay for the tracking and documentation required to certify a project.

Hunter says a general contractor like Eckman can help the building owner understand the return on investment and strike a balance between the budget and the client’s social and environmental goals.

“There are a number of components based on creating a high-performance building: energy efficiency and low water [use], reduced energy use, daylight harvesting. It’s all dollars and cents,” says Hunter, “A building that consumes less energy costs less to operate and that adds to its value.”

A design-build firm can help a client choose the best initiatives to pursue to achieve the highest level of sustainability within the budget, says Rachel Lombard, assistant project manager at DEW Construction, which has offices in Keene and Manchester.

“There are usually construction credits for waste management,” says Lombard. “If we are able to deter 50% of the waste from the landfill, we earn one point, at 70% we earn two and at 95% we earn three points,” she says. “This is a pretty cool credit, because, as an industry, we do create a lot of waste, so I like having a plan in place to drive recycling of wood, concrete, old bricks and other materials.

Lombard says improving indoor air quality during and after construction offers opportunities to earn points, including having low VOCs, (volatile organic compounds emitted by paints, glues and solvents) and making sure the building is well ventilated for construction staff.

According to the U.S. Green Building Council, client demand for healthier buildings is a chief driver for taking on LEED certification, though some property owners are motivated by lower energy costs and increased resale value. An evaluation of 22 federal facilities showed LEED-certified buildings, in aggregate, cost 19% less to operate, while a study of certified buildings in Texas showed an average market value 6% higher than other buildings.

For others, the certification is rooted in a broader mission to do good or a desire to be sustainable. One example is Hypertherm in Hanover, a manufacturer of industrial cutting products, which achieved LEED gold certification in 2014 for its newest manufacturing building. 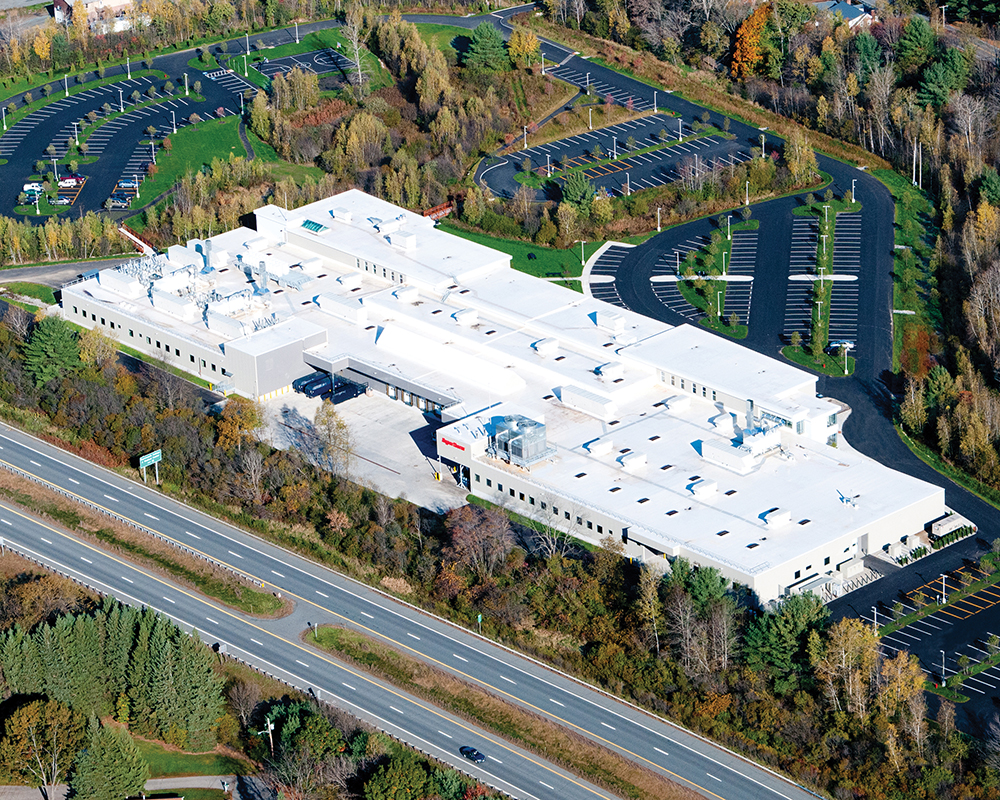 The exterior of Hypertherm in Hanover. Courtesy photo.

“We decided to build this way because doing so aligned with our core values and environmental goals,” says company spokesperson Michelle Avila. At the time it was the only manufacturing facility in the state to receive the gold designation.

The 160,000-square-foot facility received a total of 62 points for its focus on sustainability. The building design and site plan lower operating costs. The labs now recycle water through filtration instead of flushing 40,000 gallons per day and new production machines are more energy efficient. 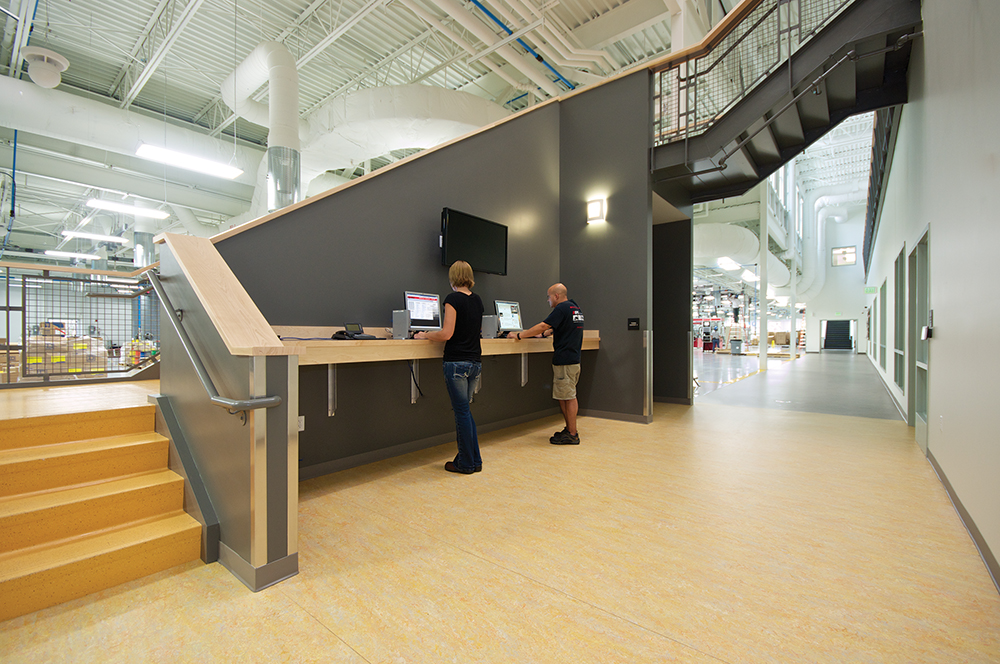 The interior of Hypertherm in Hanover. Courtesy photo.

LEED in NH
Education is “LEEDing” the way in certification in the state with two of the three structures achieving platinum level in NH rooted in academics.

The largest platinum project in NH is the Life Science Center at Dartmouth College in Hanover. The 174,500-square-foot structure has a highly insulated envelope (walls and roof) and several “green” roofs constructed of layered soil topped with cultivated grasses that help conserve energy by controlling heat and cooling loss. Rooftop rainwater is channeled into six 10,000-gallon storage tanks and used in the building’s graywater system for tasks, such as flushing toilets, to conserve drinking water. The water collection and treatment system minimizes runoff, reducing downstream discharge and minimizing contamination of the waterways. According to the college, the center is saving 30% to 35% on energy costs compared with buildings of standard construction. Dartmouth has seven LEED certified buildings on campus, with an additional five buildings in design. 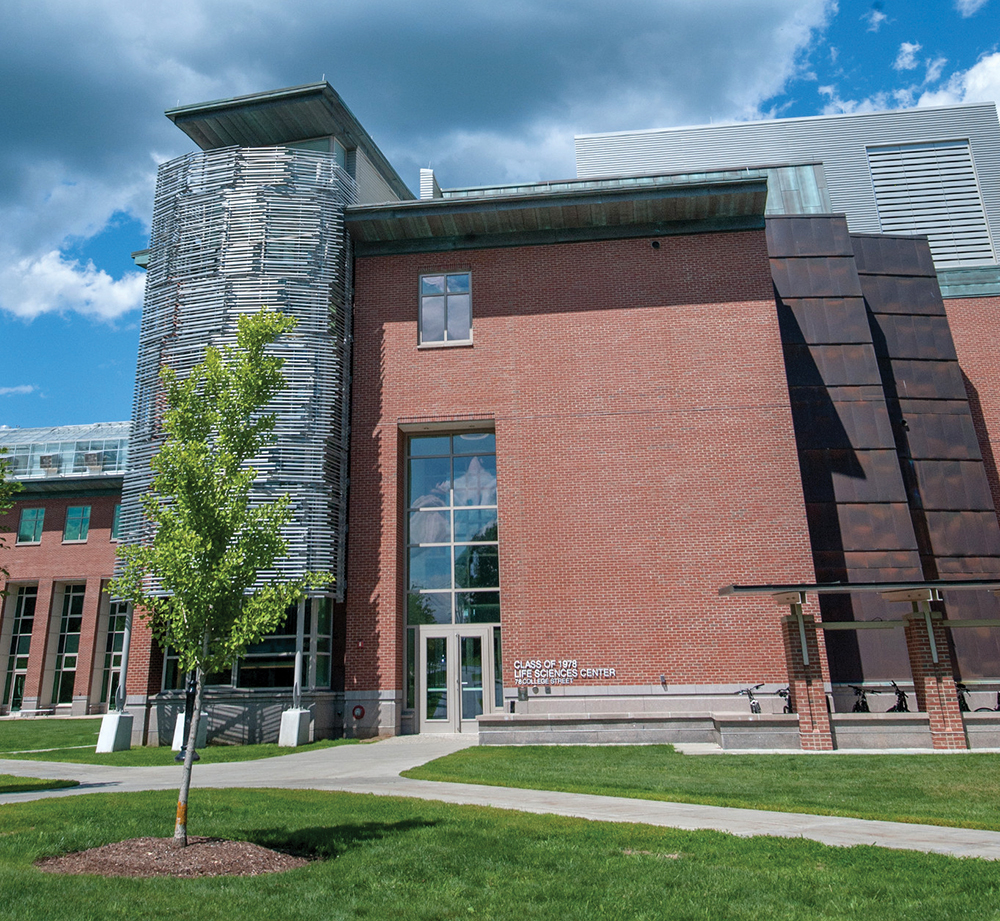 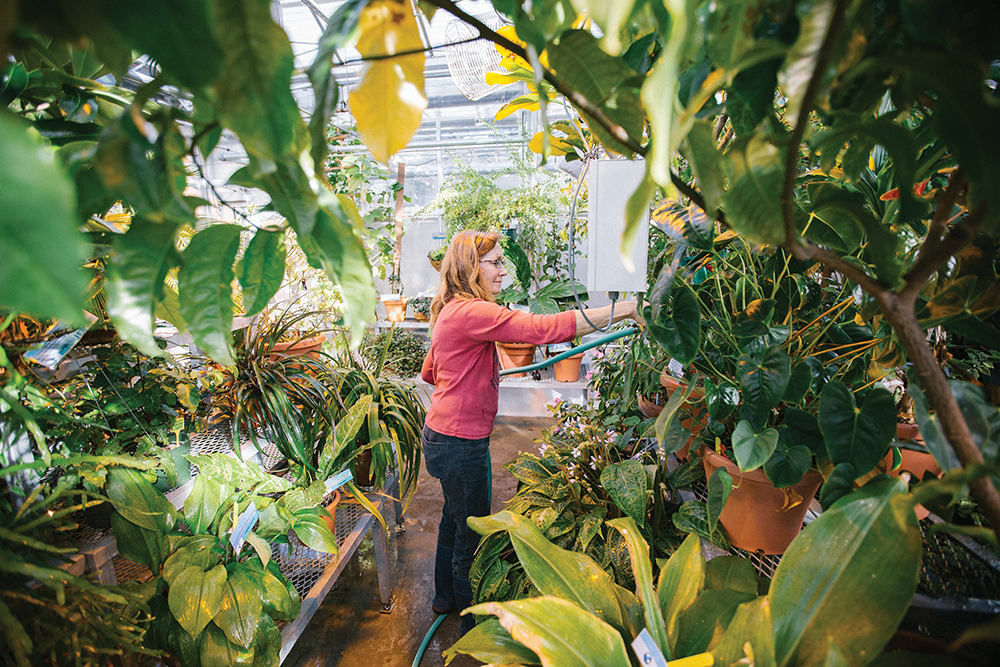 Also achieving platinum status is Sullivan Construction’s headquarters in Bedford, which cut energy costs by 30%. The firm says the savings related to installing energy-efficient HVAC and lighting resulted in a two-year payback for those systems.

There are 28 gold-certified projects in NH and one of the most recent projects to achieve this stature is the 85,000-square-foot William Boyce Thompson Field House at Phillips Exeter Academy in Exeter. Key features include reused wood as flooring and a rooftop solar array, consisting of more than 1,500 panels, forming one of the largest arrays in the state. The solar power is designed to offset the majority of the building’s electric load and is projected to save the academy $2 million over the system’s lifetime.

But it’s not just private and nonprofit sectors meeting LEED standards. The state also has pursued certification. New Hampshire Liquor Commission Chairman Joseph Mollica says the agency decided to build the NH Liquor & Wine Outlet on Coliseum Avenue in Nashua to LEED standards because the cost fit within the budget and aligned with a larger state initiative toward energy-efficiency. The 2019 project includes a geothermal heating and cooling system that draws from multiple wells dug on the property to optimize efficiency. About 20% of the construction materials were recycled and another 20% of materials came from within 500 miles of the job site, which limited the amount of fuel and emissions used in shipping.

“We also recycled approximately 92% of the waste from the construction project,” Mollica says. “Up front, it costs about 10% more to construct a building to these gold standards, but we expect to save more than that 10% over the long term.”

This project spurred the Liquor Commission to incorporate more green building practices into other projects. While one of the newest outlets is not certified, it is still green. “Our newly-opened Tri-City New Hampshire Liquor and Wine Outlet in Somersworth is our first energy-neutral location,” says Mollica.

Hughes of Oak Point Associates, which assisted with the Nashua build, says the firm designs every project to be sustainable.

“We have to meet current energy codes and beat those standards by 10% for any state projects,” he says.
Hughes says Oak Point has been involved with several state and federal projects, including at the Portsmouth Naval Shipyard. The firm worked with Eckman Construction on the NH Army National Guard Regional Training Institute and barracks facility in Pembroke, which earned LEED silver certification in 2011. 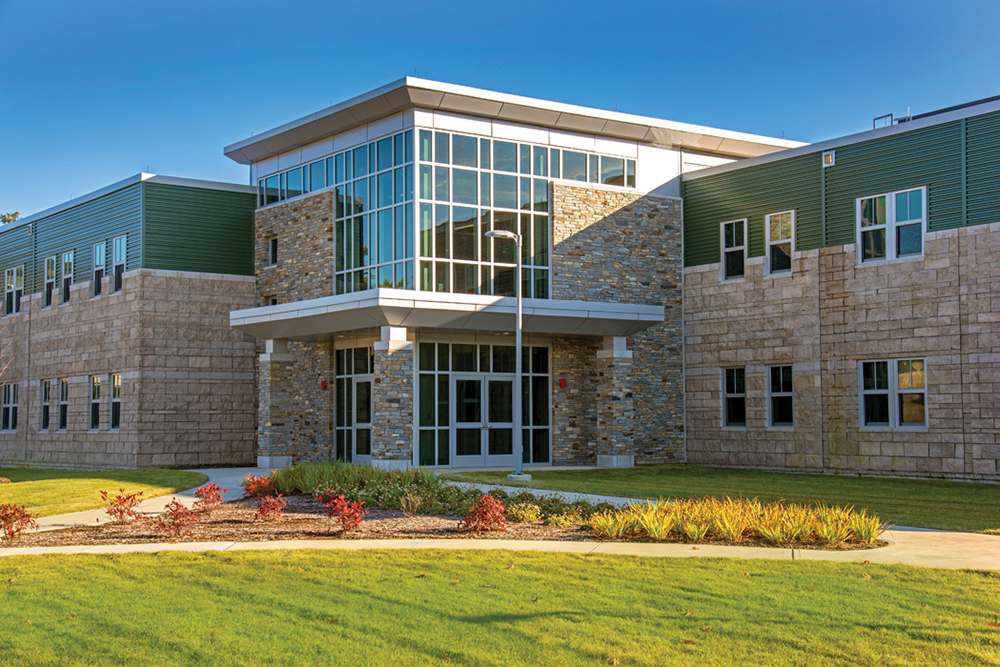 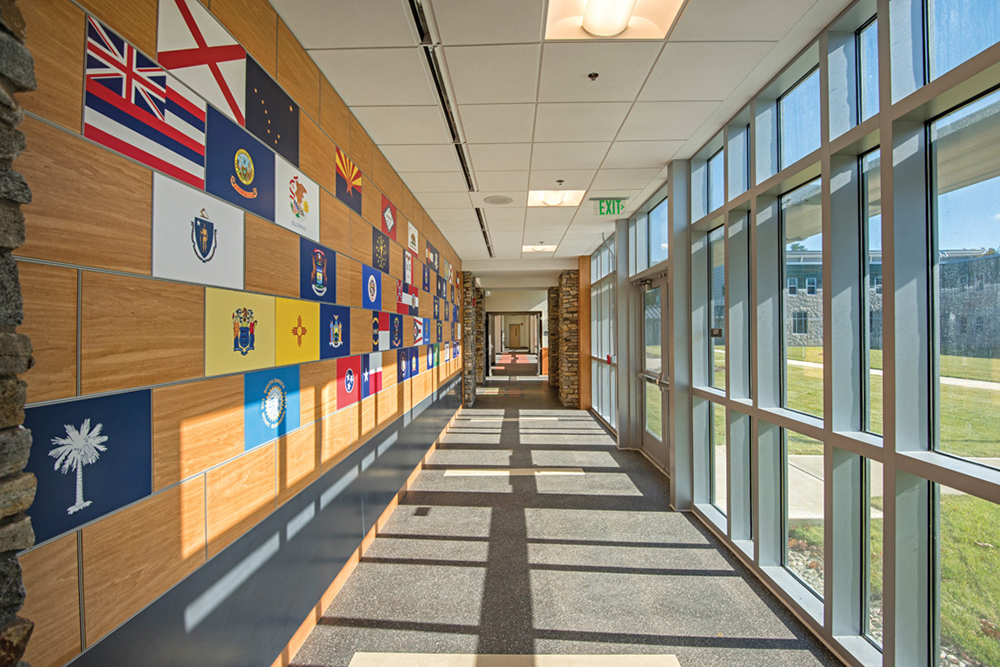 The campus consists of two buildings: a 56,000-square-foot training facility that includes a large multi-purpose training area, classrooms, a 180-seat auditorium and a commercial kitchen, as well as a 48,000-square-foot barracks that can sleep 144. 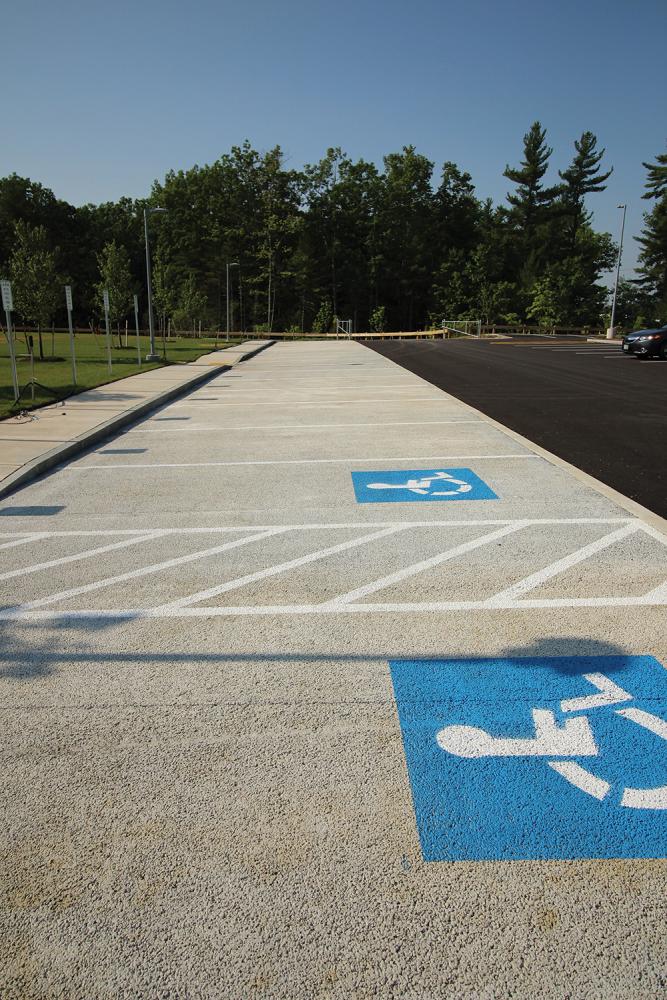 The National Guard project includes a rainwater harvesting system and pervious pavement (pictured) that reduces runoff and erosion by allowing rainwater to infiltrate directly into the soil. Hunter says the biggest investment in most high-performance buildings is the envelope, which is tested during construction for air leakage and other key performance characteristics.

The largest LEED certified build in NH is the 614,000-square-foot UPS Northeast Logistics Center in Londonderry, designed by TFMoran in Bedford. The building covers 14 acres and includes office, assembly, storage, and distribution areas on a 45-acre site.

Robert Duval, president of TFMoran says the project, which was completed in 2015 is LEED silver certified but it was quite a challenge to meet the requirements. “Because it is such an enormous building, we really had to dig deep to find the points,” Duval says. “We did as many plantings as we could and provided bike racks and showers and parking for low-emission and hybrid cars.”

He says they were able to get stormwater runoff credits by designing a drought-tolerant landscape using plants that do not require irrigation.

Raising the Bar
LEED version 4, which went into effect in 2015, was designed to up the ante to earn certification by requiring a more flexible, performance-based approach that calls for measurable results throughout a building’s life cycle.

Building codes are based on accepted national standards adopted by the state and NH recently updated its master code. As Hunter explains, several green-building practices have become standard, including ventilation systems to ensure better air quality. The result is more buildings are being constructed with green methods even when certification is not part of the plan.

Hunter says there is still value in certification. “The LEED rating has helped shine a light on the advantages of high-performance buildings,” he says.

Meanwhile, the U.S. Green Building Council is looking to broaden its audience for certification. LEED 4.1, while not a full change, is intended to make it easier for existing buildings to achieve certification and provide new opportunities, such as neighborhood development, residential and cities and communities. 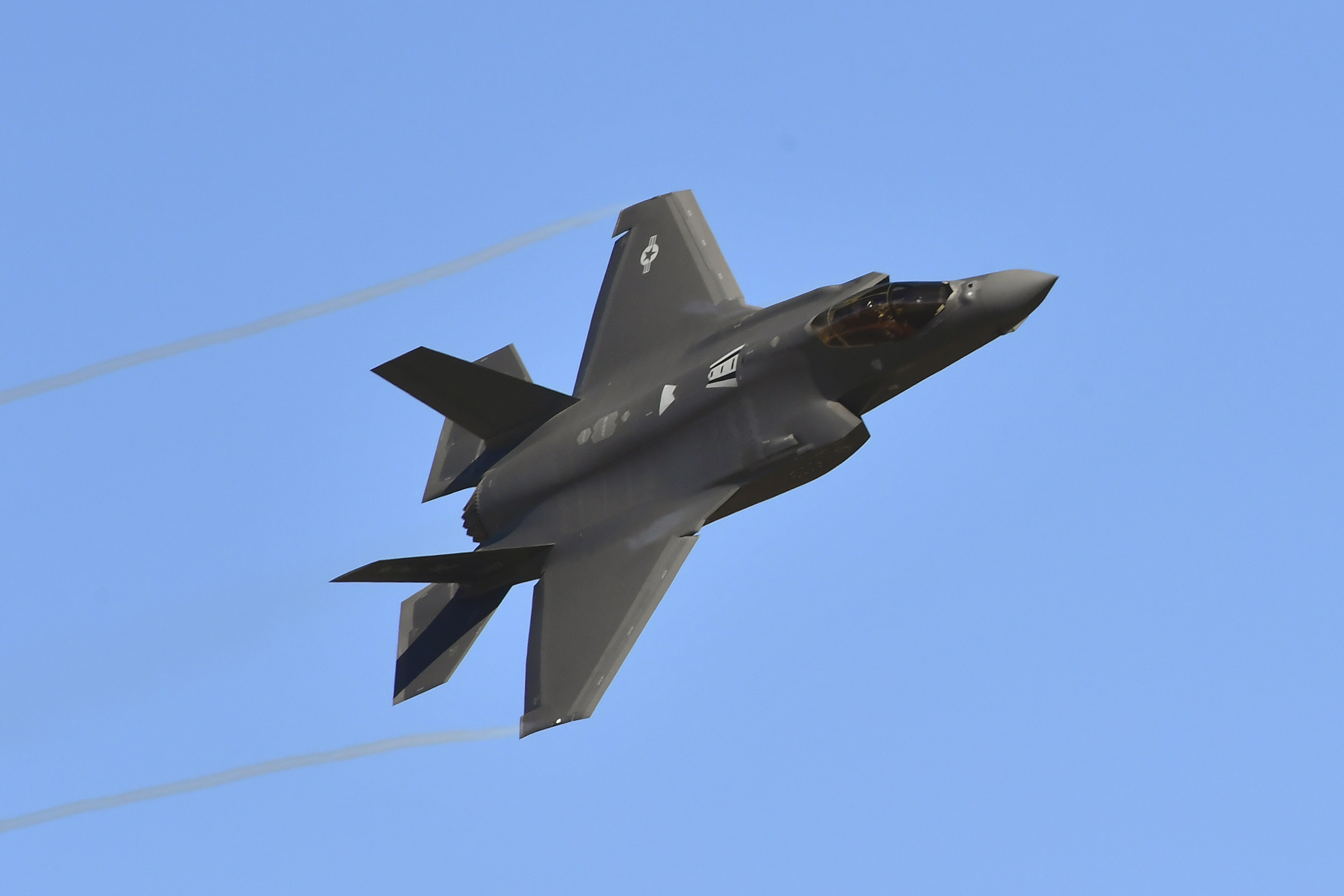 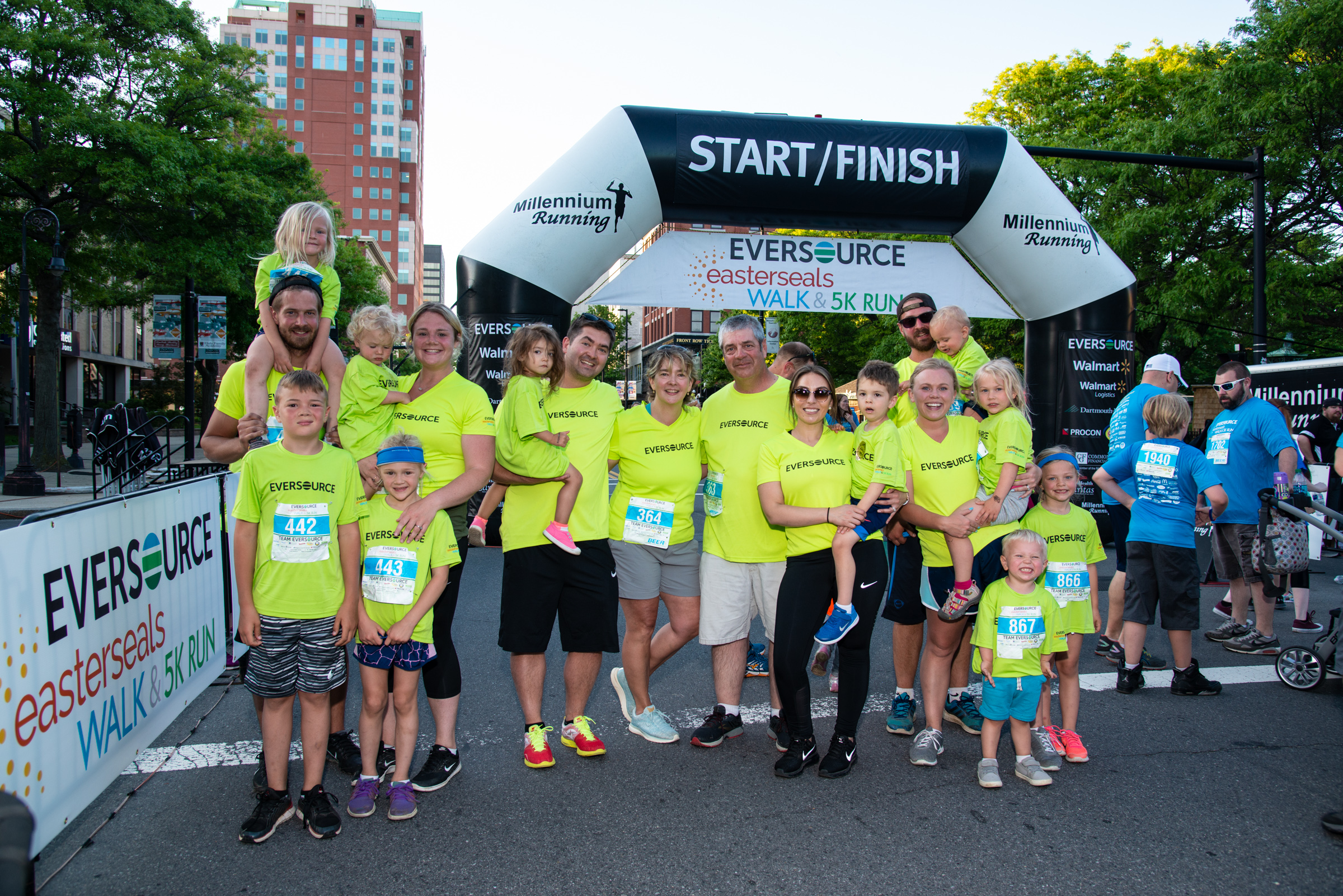