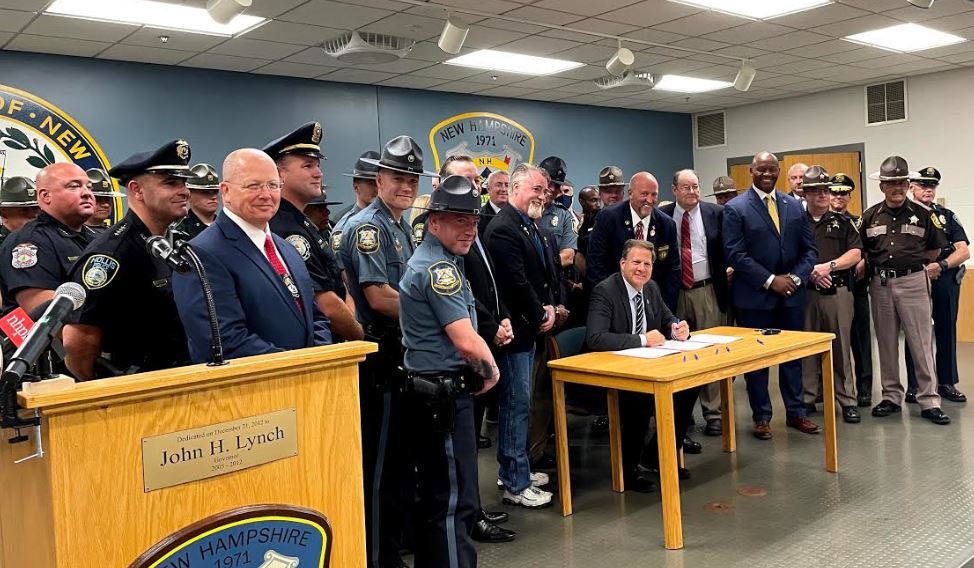 A thick blue line of police officers surrounded Gov. Chris Sununu Wednesday as he signed into law three bills which together, he says, herald a new day in police accountability throughout the state.

The three bills, now law, look to ensure more public knowledge of the work of police and incorporate much of the work of the governor’s commission on Law Enforcement Accountability, Community and Transparency formed in the wake of the George Floyd’s murder by a white police officer in Minnesota.

Sununu said 2020 was a very tough year on a number of fronts, including the riots that occurred across the country following the videotaped death of George Floyd, a man of color.

He formed the LEACT board as a way of “staying ahead of the game” in community policing, Sununu said, looking at ways to improve policing before a tragedy and integrating funding and programming from a more global perspective to provide a state-of-the-art law enforcement community, and essentially lead the country as an example of how to do things best.

“We are that gold standard,” Sununu said.

But he noted LEACT is not “a one and done and will meet in the future to discuss what needs to be done to ensure community transparency.

Some leading Democrats, however, were disappointed with the outcomes and said they amounted to a largely pared-down version of the original legislation.

“The LEACT Commission, made up of a broad coalition of stakeholders, worked tirelessly last summer to develop legislative recommendations to address racial justice, law enforcement, and the need for reform. It is unfortunate that Senate Republicans drastically narrowed the scope of this legislation, removing key elements such as data collection and mandatory judicial training regarding implicit bias and racial profiling, two key recommendations from the LEACT Commission. While we are pleased to see portions of the original bill enacted into law, we look forward to continuing our work to enact policies to ensure that New Hampshire is a safe and just place for all and that public safety is paramount.”

The signed bills include:
House Bill 471, the so-called Laurie List bill, requires police disciplinary hearings to be open to the public unless certain confidential information may be revealed. It says the Department of Justice may maintain an Exculpatory Evidence Schedule, formerly called the Laurie List, of dishonest officers and make the list public.

“The Exculpatory Evidence Schedule shall consist of a list of all current or former law enforcement officers whose personnel information contain potentially exculpatory evidence.” The list “may” be maintained by the Department of Justice and shall be a public record subject to RSA 91-A, the state’s right-to-know law.

“For officers on the list and effective of this date forward, they shall be provided written notice that they are on the list and that he or she has 180 days from the date of notification to file a lawsuit in superior court to challenge placement.

Once the pending action has concluded with a final order, after exhausting any applicable appellate rights, the individual’s name and corresponding information will become public, with some exceptions.

It states the Department of Justice shall at least monthly update the list on a publicly accessible website.

Also, beginning on January 1, 2022, and quarterly thereafter, the DOJ, provided it continues to maintain the list, shall file a report with the governor, the president of the senate, the speaker of the house of representatives, and the chairpersons of the house and senate judiciary committees concerning compliance, which will be public. The new law takes effect in 30 days.

The New Hampshire Center for Public Interest Journalism, which publishes InDepthNH.org, opposed the Laurie List inclusion into HB 471. The amendment was a compromise hammered out in negotiations between the Attorney General’s Office and ACLU-NH along with five news outlets that signed on in an attempt to settle a public records lawsuit against the attorney general to release the list. While legislators, police unions and the five news outlets agreed to the compromise, the lead plaintiff, New Hampshire Center for Public Interest Journalism, opposed the legislation.

The Keene Sentinel, the Nashua Telegraph, Seacoast Newspapers, the New Hampshire Union Leader and the Concord Monitor backed the compromise language. Judge Charles Temple will hold a status conference next month on the lawsuit.

In Hillsborough County Superior Court South, Judge Temple ruled two years ago that the Laurie List is a public document, but the state appealed to the state Supreme Court, which also ruled the list is public, but remanded it back to Temple to determine if the police on the list have privacy rights.

Gilles Bissonnette, legal director of ACLU-NH, previously said: “All of this was done in the hope to resolve the public disclosure on the EES (Laurie List) once and for all. I believe this amendment as well is consistent with the LEACT commission recommendations concerning the EES.”

Volinsky filed an objection to the motion to delay the lawsuit saying under the HB 471 amendment, any officer on the list could tie up the release of his or her listing by filing litigation that presents a due process claim and prevent release of the listing until that litigation is completed, which could take years.

“Finally, as if all of the tilting towards the listed officer were not enough, the whole EES (Laurie List) is made completely discretionary” by the amendment, Volinsky wrote.

– Senate Bill 96, much of which comes from LEACT recommendations including the establishing a body-worn and in-car camera fund, amending juvenile delinquency proceedings and transfers to superior court, and establishing committees to study the role and scope of authority of school resource officers and the collection of race and ethnicity data on state identification cards.

The bill signing, at Police Standards and Training in Concord was well-attended by many leaders of law enforcement, including many county sheriffs, police chiefs, and members of the LEACT Commission.
John Scippa, head of Police Standards and Training, welcomed all noting a lot of hard work which has taken place the past year both at the committee and legislative level.

He said the work will continue at Police Standards and Training – where all New Hampshire police officers are trained and accredited no matter what department they serve – and will help to “shape, sustain and strengthen,” law enforcement “as a service to our state.”

He said they are proud of that.

John Formella, attorney general, said the day marked an important milestone in strengthening the commitment between law enforcement and the communities they serve.

He thanked many involved in the efforts including the members of the LEACT Commission.
The late Rogers Johnson, who served on the LEACT board, was recognized posthumously for his service and input into the new laws.

Sununu praised Scippa, LEACT, and the legislature for the work needed in an incredibly short time frame and noted several legislators including state Sen. Jeb Bradley, R-Wolfeboro for leadership in language related to HB 471.
He said the legislators and committee could have taken longer but for the citizens, “We can’t wait. Government is good at waiting.”

He recalled after many zoom meetings, and in-person lunches with the LEACT commission where the 49 recommendations were discussed and where he went line by line to figure out how to implement them.

“We were able to come together and find that common ground,” he said.

Sununu said this is the beginning of the process.
The data which will now be collected will help to inform new laws, he said, and learning from the successes and failures in other states.

Sen. Bradley, who worked to craft the final language on the LEACT bill issued his own statement.

“I am very pleased that SB 96 is now law, and we can move forward with several of the recommendations from the LEACT Commission.  These changes are important to criminal justice reform here in New Hampshire and have broad support including, retaining information regarding certain police internal affairs investigations for 20 years, requiring the employment agreement between a school and its resource officer be made public, establishing a body-worn camera fund with an appropriation, amending our juvenile delinquency law to exclude children under 13 unless they are charged with certain violent crimes, and establishing a study committee to consider whether the state should collect race and ethnicity data to be included on state identification cards.” 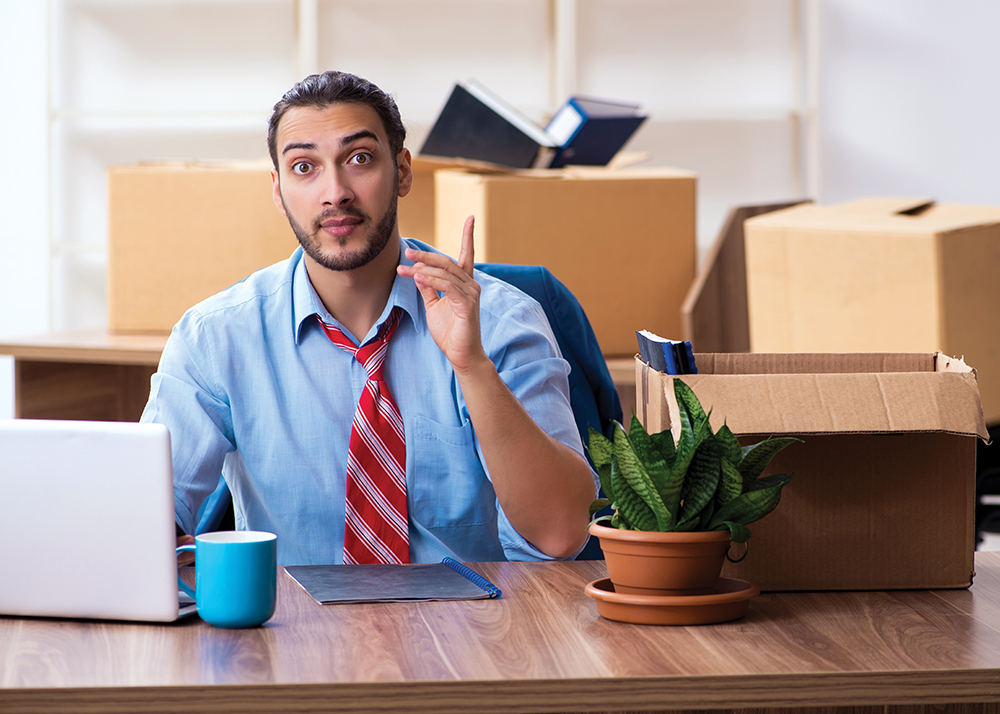 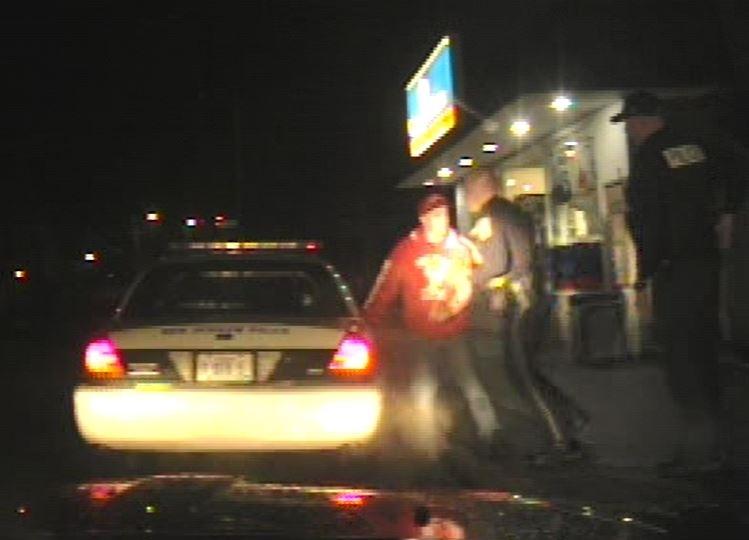