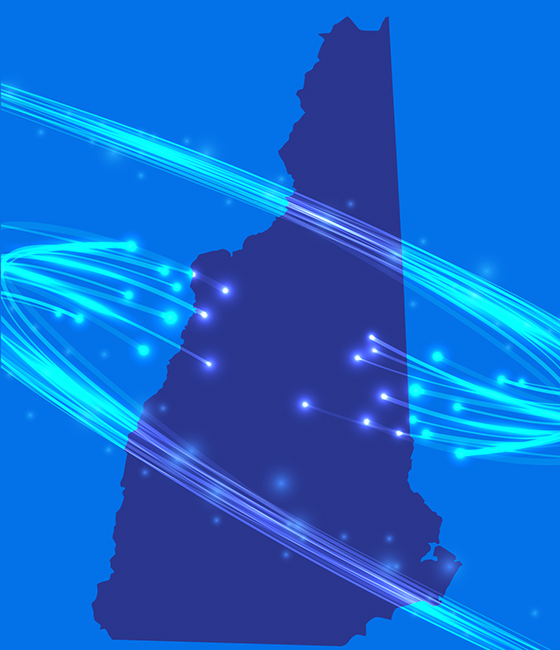 While most people and businesses in the Granite State have access to broadband, 6.1 percent of the state’s population, or 79,826 people, are considered underserved when it comes to accessing high speed internet, according to the NH Broadband Mapping and Planning Program’s 2016 broadband report.

These underserved residents are in rural areas where extending broadband infrastructure is expensive. That raises questions of whether the potential economic impact of extending high speed internet outweighs the cost and who will pay for it.

Due to the variance in internet availability and speed, the Federal Communications Commission (FCC) released an updated broadband standard in 2015, defining broadband as a minimum download speed of 25 megabits per second (Mbps) and a minimum upload speed of 3 Mbps, because they say these are the minimum speeds necessary to access the full range of broadband applications, including high-quality voice, data, graphics and video.

Those underserved Granite Staters mentioned above have access to download speeds between 6 and 25 Mbps and upload speeds between 1.5 and 3 Mbps. Additionally, there are 2,683 NH residents who are effectively without internet access. But even this data is dated, making it difficult to know what actually needs to be done to improve broadband quality in NH.

“The current way that mapping is done, the data, it’s dated by the time it’s published. The providers will tell you that they are far better than what that data suggests, but one could speculate that part of that is marketing and part of it is real,” says Brian Shepperd, director of broadband services at the University of NH in Durham. “I believe we should have a nationwide, online, live, street-level broadband map. There’s no reason in this day and age that we can’t have every provider reporting every street address and have it be instantaneously available. There’s no reason why that can’t happen besides providers thinking that they’re going to give away their maps to competition.”

Ellen Scarponi, senior director of government affairs and economic development for Consolidated Communications, says that since Consolidated Communications acquired Verizon’s assets in 2008, it has invested more than $360 million in broadband infrastructure and network enhancements in NH, and has more than 7,200 miles of fiber, including fiber to nearly 400 cell towers. “We serve all or portions of 236 towns and cities in New Hampshire. That’s over 90 percent of the state,” Scarponi says.

And that doesn’t take into account the investments of other broadband providers. Comcast serves 103 NH communities, offering 100 gigabits per second  for businesses and up to two gigabits per second for residential consumers. According to Marc Goodman, Comcast’s director of public relations, the cable and internet service provider has increased its speeds 17 times in the last 16 years.

Comcast recently provided 11,000 open hot spots throughout Southern NH that anyone can access, Goodman says. And last year, it added 50 miles of fiber and coaxial cable, serving 1,500 businesses and residents, he says. According to the NH Broadband Mapping and Planning Program, there are 62 broadband service providers in the state.

As for the question of speed, Scarponi says, “Every town that we serve, some portion of that [area] can get 25 Mbps service as a download speed for residential and small business application. It’s that three Mbps upload [definition] that the FCC arbitrarily changed that, in Consolidated Communication’s case, took us out of the running to be on that map because our service is 25 by two, which for 90 percent of the residential and small business applications is more than enough.” She adds that advances in technology now allow Consolidated Communications to offer up to 50 Mbps for download and 20 Mbps per upload in some exchanges.

Scarponi says she doesn’t question that there are pockets of residents in NH that don’t have that service due to the high cost of extending infrastructure. However, she says, “Businesses are a different story. If a business wants service, we will work with them to find ways to get the type of service they need to their doorstep.”

Balancing Needs and Costs
Michael Ladam, who retired Dec. 1 as director of regulatory innovation and strategy for the NH Public Utilities Commission, says that companies don’t like to invest in the most remote areas because there is no economic return. “Companies quickly find out, well, gee if we have a long distance between houses and we must string fiber, we’re not going to get the monthly revenue from the subscribers. We do have to pay for that network. That’s really what we need to start addressing,” he says.

Scarponi acknowledges cost and return on investment are the biggest obstacles to further expanding access in rural communities. “I’ve gone out to towns who have made their case and said, ‘it should be the God-given right that I can get broadband.’ … I do these presentations where I show them the fiber infrastructure that we have invested in these towns. I show them where and how far and how fast we have increased the speeds,” Scarponi says. “And then I talk to them about what the actual costs are to get out to those last five people five miles up the road. And, at the end of the conversation, we’re showing them that a mile of fiber is going to cost $25,000 to $30,000 a mile. And then you have switching equipment for five or 10 people who are only going to spend $40 a month on service. I’m not saying those last 10 people aren’t important. I’m saying there must be an economic payback that’s reasonable to get it out there. Whether it is a Consolidated Communications, a Comcast, a Spectrum, no matter who the provider, there has to be a reasonable expectation that is not going to sink us.”

And there are people willing to forgo that high-speed service because of cost. “Affordability comes into play. Many folks who said, ‘yeah, I’m OK,’ are unwilling to pay any more,” says David Foote, state broadband initiative manager for the NH Broadband Mapping and Planning Program. And there are those who don’t see the value of having high-speed internet.

Based on surveys of NH residents conducted by the NH Broadband Mapping and Planning Program, “we have a sense that there’s a segment of the population that isn’t really aware of what they could do with the technology if it were available to them,” says Fay Rubin, project director of the program.

Concerns Aired at Hearing
The question of how to provide as many people as possible with access to high speed internet is being explored at the state and federal level. Sen. Maggie Hassan hosted a field hearing in October to examine the deployment of broadband infrastructure, especially in rural areas.

Tom Strickland, president and co-owner of Sequoya Technologies in Peterborough, testified at the broadband hearing that if NH is not equipped with adequate broadband availability, the Granite State won’t be able to compete with urban areas and will lose millennials who could possibly launch the next wave of a business boom here.

“I am absolutely a firm believer in: if we build it they will come, and if we don’t build it here, they will go somewhere else,” he says. “Think about Amazon. They want to bring 50,000 jobs someplace. So, there’s an opportunity for us in a place that is very desirable from a standpoint of where people want to live, to be able to bring world-class industry into this area, but if we don’t have broadband, it’s not going to happen.”

Strickland says while Amazon can build whatever internet connectivity it needs, its employees may not have access to the high speed internet they want in their homes. “We’re not allowing the next generation of businesses to form here because we don’t have those facilities. The next big internet thing is probably not going to happen in New Hampshire. It’s going to happen where there are resources to support it, and if we build those resources, then maybe, some of those startups will locate here. Some of those people who are going to start those businesses may already be here, but they will go somewhere else to start their business because they don’t have the support infrastructure that they need. We’d like for them to stay.”

It’s not just businesses that are concerned about access to high speed internet. Lack of access is also an impediment to education and developing the next generation of workers. At the October hearing, FCC Commissioner Jessica Rosenworcel spoke about the impact of the homework gap. “According to the Joint Economic Committee of the United States Senate, there are 12 million kids [nationally] that fall into the Homework Gap. These kids do not have broadband at home because it is unavailable or out-of-reach for their families. Carriers across the country are pitching in by making available low-cost broadband service,” says Rosenworcel.

Five years ago, Comcast launched a flagship community investment program called Comcast Internet Essentials where any family with a child in the national lunch program or any recipient of HUD housing can receive literacy training, internet service for $9.95 a month and an opportunity to purchase a laptop for less than $150.

Public and Private Partnerships
At the October broadband hearing, much of the discussion centered on creating public and private partnerships between the state and broadband providers. “There’s been ongoing discussions for years and years over whether the state should allow municipalities to bond for broadband appointment,” says Ladam. The current law allows municipalities to bond broadband expansion projects for unserved areas but not for underserved ones. Ladam explains that the Public Utilities Commission (PUC) has no jurisdiction over speed adequacy, reliability or price of broadband services. “The PUC has no role in that. We have regulatory authority over traditional telephone lines.”

However, the legislature passed House Bill 238 earlier this year to establish a standing committee in the House to study broadband access. The committee’s first task will be to define what “underserved” means, according to Rep. Richard Barry, who is the chair of the House Science, Technology, and Energy Committee. Senate Bill 170 was introduced in March, and later amended in November to allow municipalities to issue bonds for broadband public private partnerships, and define unserved locations as those that don’t meet the FCC’s minimum broadband standard, according to Sen. Jay Kahn, who is leading the initiative. The Public Municipal Affairs Committee unanimously voted to send the bill to the Senate, which will review it in January. If the Senate passes the bill, it will then move on to the House in February. “We’ve come a long way in New Hampshire, and we still have a long way to go,” say Shepperd.

Digital Billboards Popping Up in NH