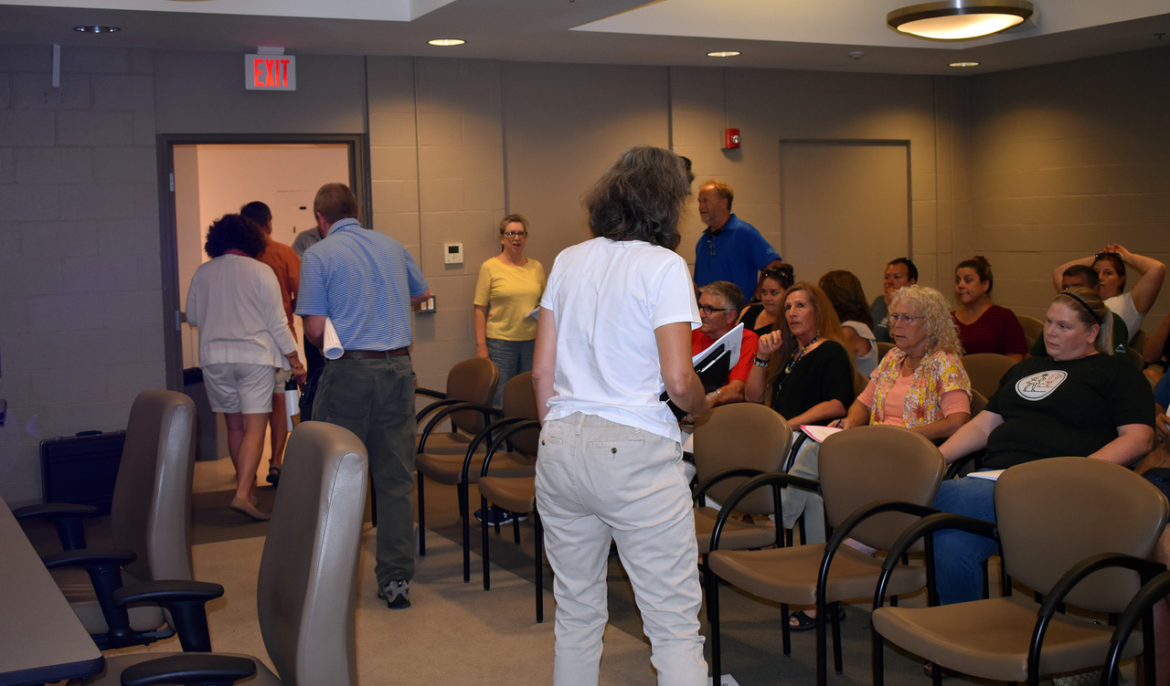 One month after employees of the Gunstock Mountain Resort complained of disrespect by the governing Gunstock Area Commission, a new seating plan that placed senior management in the audience at the Belknap County Complex was seen as a further insult, leading to the resignation of the entire management team.

“Generally, we’d be sitting around the table and participating in the conversation,” said Gunstock President and General Manager Tom Day as he spoke from the front row of the audience on July 20. “Is there a reason why that happened?”

Commission Chair Peter Ness said the new seating arrangement was “to be more consistent with the way other delegations and committees work. When we go through the [financial report] we’ll have you and Cathy [White, Gunstock’s chief financial officer] come up to the table and run the whole show.”

“OK, I’d just like to say right now that I’d like to tender my resignation, with two weeks’ notice,” Day said. “I’d be happy to facilitate or whatever I can do. Obviously, there’s been a lot of change and one of the things that we can do to help decide how to run the resort. I know there’s been discussion about what my role is and who does it. I had a great conversation … explaining to me that you guys are the boss; I understand that I answer to you, but it seems that there’s a lot more control on your side of it, so I feel my role here is diminished.”

Immediately after Day announced his resignation, White followed, and then other members of senior management followed suit. As they walked out of the meeting, Commissioner Gary Kiedaisch announced that he, too, was resigning.

Following a 10-minute recess in the wake of the surprise action, Ness announced that the commission would dispense with its agenda for the evening and convene in non-public session “in order to address consequences of what we’ve just witnessed.”

The audience, which filled every seat in the meeting room, was not ready to leave.

Frank McDonald stood to object, “I don’t understand. … If they were sitting at the dais with you as a team, and you already knew that things were on thin ice, why would you change that from the get-go? That is the reason why they resigned.”

Relations between the newer commissioners and the Gunstock staff have been strained, leading to an open clash during the commission’s June 22 meeting. Robin McGonagle, who serves as sales director and chief operating officer at the county-owned recreation area, said she was “shaken to my core” and that the entire organization has been suffering “because of what we are living here on a day-to-day basis.”

“It is troubling,” McGonagle said at that meeting. “The morale is affected. I don’t know if you realize this. It is not good, and it is because of this contentious nature that I’ve never experienced, ever, in 21 years.”

She continued, “I want to know from all of you, what are you so angry about? … Everything that comes out of your mouth is argumentative, like you are on an attack.”

Commissioner Jade Wood, who often acts as mediator during contentious exchanges, suggested following Wednesday’s resignations that the audience be given 30 minutes to comment prior to the panel going into non-public session.

Gilford resident Skip Murphy, who was videotaping the meeting, spoke up first to say they should make sure the physical plant is secure.

“You’d best get a hold of your IT manager and secure all of their accounts on top of that, that could result if people are wishing to really screw things up. And I do hope your backup system is running very, very well,” Murphy said.

He went on to call the resignations a political stunt.

Jon Decker of the Laconia Daily Sun challenged Murphy for making it a “partisan issue.” When Murphy responded that he was referring to neither Republicans nor Democrats, Decker shot back, “Actually you do. Listen to your own damn tapes saying ‘Democrat’ right there. Go review it.”

Ness asked the audience not to debate each other, saying, “If Mr. Murphy makes a point, sir, you’re more than welcome to make [your] point. We’re all wondering what your point is.”

Decker later turned to Ness, saying, “Do you have any regret? Or do you feel anything about your initial attempt to sell your own ski instruction software to the mountain when you are a member of the GAC? That seems to be a huge catalyst for a lot of what happened here tonight, and I want to see if you have any comment on that.”

“I never attempted, sir, to sell any software to Gunstock,” Ness responded.

The delegation has asked the Gunstock Area Commission to reimburse the county’s legal expenses. The Belknap County Commissioners have refused to pay the $30,000 in excess costs that the delegation’s “control group” incurred, with the complete legal bill totaling $50,000. The delegation had approved spending $20,000 to defend against Gunstock’s lawsuit.

Most of the speakers on Wednesday praised Gunstock’s management team for making the recreation area profitable and popular with skiers, and suggested that the commission should refuse to accept the resignations.

Alex Delucca, who works at Gunstock, said he is “really disappointed” and “shocked” at what just happened, but said, “I’m a faithful person and I know that the right thing will happen.”

Rep. Juliet Harvey-Bolia, R-Tilton, said she, too, is faithful, “and I do believe that the right thing will be done.” She added that the four commissioners at the table are volunteers in a very difficult job.

Tom Brown, who is in his third year as a Gunstock employee, said, “I personally think that, instead of you guys being focused on the customers, you’re focused on the fight … between yourselves and the delegation, and that is taking the focus off from the customer.”

“We’re looking at this master development plan. We’re talking millions and millions of dollars that are going to have to be bonded, which means that a delegation, whether the present one or a different one, a delegation is going to be asked to approve bonding to spend millions of dollars…. If there isn’t a high level of confidence of the people that are going to be asked to present and to approve this money, it isn’t going to happen.”

The previous commissioners acted as “rubber stamps,” Lambert said. Now the commission is asking questions. “I see nothing wrong with asking questions. I have said over and over again and again, the improvements and the wonderful job that Tom Day has done, and I think other members of this commission have done the same thing. We recognize that, however, we are tasked to do a job, and that job involves understanding and questioning and ultimately, hopefully, supporting.”

The non-public session was to decide what the next steps for Gunstock will be.