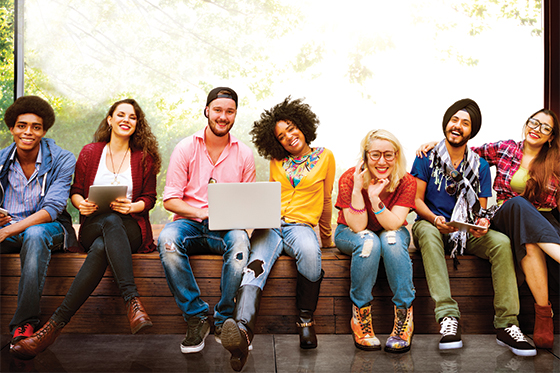 The town of Henniker is like many NH small towns: rural, sprawling and white. Except, that is, for one 225-acre parcel, New England College, where 35 percent of the school population in 2015 had a racial background other than white. In contrast to the state as a whole, this is huge, as only 8 percent of NH’s population is of a racial background other than white.

That lack of diversity statewide is a cause for concern. New Hampshire has been heavily reliant on importing talent into its workforce and that in-migration has slowed substantially. In order for the state to continue to grow economically, it will not only have to develop and retain more in-state talent, but find ways to attract and retain more talent from outside the state, which can be a tougher sell with a less diverse population.

From a business perspective, the lack of diversity is also a problem. A 2015 report by McKinsey found that public companies with more racial and ethnic diversity were 35 percent more likely to have returns above national industry norms.

Colleges and universities are key to both fostering diversity and attracting a more diverse population. The Carsey School of Public Policy at the University of NH found that as of July 2012, 47 percent of the 82.5 million people under age 20 in America were from “minority” populations.

“Colleges and universities are pipelines for [a] high skilled, high knowledge workforce,” says Tom Horgan, president and CEO of the NH College and University Council (NHCUC), a statewide nonprofit consortium of public and private colleges and universities. “And as the campuses become more diverse, it changes the dynamic of the pipeline. So the employers who look to college graduates are looking for a more diverse group of applicants who are more reflective of the world in which we live.

And I think that’s particularly important in a state like New Hampshire, that’s not particularly diverse, to work hard to make sure that they are reflective of this more international, diverse population.”

Can NH Colleges Close the Gap?
New England College has experienced the highest increase in diversity of all NH higher ed institutions in NH, from 14.7 percent of its student population being of racial backgrounds other than white in 2010 to 35 percent 2015.

The reason is that the college has spent the past five years recruiting a more diverse student population. “We have deliberately identified and communicated with prospective students from regions, and from high schools within those regions, where we know there is strong diversity,” says New England College President Michele Perkins. That includes New York City, Boston, some parts of Connecticut and the Baltimore, Washington D.C. area. “There is a high school in Brooklyn, for instance, that regularly sends students to NEC. So we have a relationship there; students report back to teachers and students at that high school, and more continue to apply.”

Creating a diverse campus can be difficult, particularly in a state that is still in its infancy when it comes to diversity (see sidebar on how NH institutions are faring in their diversity efforts). One challenge is if a student from an under-represented population doesn’t see other people from their community. That can be isolating.

And recruiting a diverse population becomes easier as you go along. Perkins says, “Once you reach about 20 to 25 percent, it becomes much easier to recruit students because when they get to campus they see the diversity. You don’t have to say it; it’s evident.” To that point, New England College established the Office of Diversity and Inclusion in January and hired Lai-Monte Hunter as director. Hunter then launched the college's inaugural Black History Month celebration.

Creating diversity on campuses requires both removing barriers to entry and making the campus a supportive and inclusive place so students want to stay and then remain engaged as alumni, says Alane Shanks, a visiting scholar at the New England Center for Higher Education and director for Project Inclusion.

Project Inclusion is a statewide effort initiated in 2015 to get to the root of some of the roadblocks and build a framework and pathway to integrate diversity into all aspects of campus life, says Shanks. To that end, project participants created a rubric covering the philosophy and mission of the school, faculty support, curriculum, pedagogy, research, student support, administrative leadership, and staff engagement and involvement.

Pilot schools, which included Antioch University New England in Keene, Keene State College, Rivier University in Nashua, and the entire University System of NH, have delved into how their institutions can improve inclusiveness at each of those levels. While the project’s report has not been released yet, Shanks says she hopes the results will be usable on any campus.

Shanks says that going through this exercise has removed some fears about talking about the challenges NH campuses may have when it comes to diversity.

“I think there is a fear in sharing some of this information,” she says. “But you can only change if you see that there is that disconnect. So I think there is a lot of good discussion going on within institutions now as a result.”

Jaime Nolan, associate vice president of Community, Equity and Diversity at the University of NH, points out that creating an inclusive climate extends to every part of campus life, including creating curricula in which persons from underrepresented communities actually see themselves, their histories and their cultures represented in formal and informal learning spaces.

Colleges also need to create a campus climate that conveys understanding and appreciation of the complexity associated with diversity and inclusion, Nolan says. Educational institutions often say they value diversity and inclusion, she says, but “too often those efforts are marginalized and seen as simply to-do lists of compliance and are reduced to representational models that fail to appreciate the complexities of the communities our institutions serve. In short, everyone needs to see themselves as a stakeholder in building an inclusive community.”

Dottie Morris, chief officer of diversity and multiculturalism at Keene State College, says this can sometimes extend to understanding the backgrounds, family structures and concerns of historically underrepresented communities.

For example, she says the most common thing she hears from parents of some prospective students from underrepresented ethnic groups in Manchester, Nashua and Concord is that Keene is too far away. Even though it is just over an hour’s drive, students and their families can be anxious about being separated not only because they are tight knit families, but because of reports of violence on college campuses nationally and growing xenophobia generally. In other words, Morris says, they want to keep their kids close.

Overcoming that means the institution has to take extra steps to invite entire families to campus, showing them around and connecting them with people who can offer support. It also means being sensitive and avoiding scheduling campus events on high holy days, for example, so students can go home to be with their families.

Nolan says improving the campus climate and diversifying the campus overall will also create learning spaces through which students can learn about differences and understand the importance of interconnectedness in a rapidly changing world.  After all, Nolan says, UNH students will ultimately be working in rapidly diversifying communities in the context of internationalization and globalization.

“Most of the challenges we face and will face in our local communities, and in the context of building a sustainable world, are really fundamental issues of difference,” Nolan says. “As we’ve seen in economic crises, the interconnectedness of these systems makes bridging those differences through community building and understanding our commonalities absolutely imperative.”

Minorities No More
While much has been written about efforts to increase the number of “minority” students at college campuses, that word in the context of race has become an anachronism. In 1990, “minorities” made up 32 percent of the U.S. population younger than age 20. By 2000, it was 39 percent, according to a 2014 report from the Carsey School of Public Policy at UNH. By July 2012, 47 percent of the 82.5 million of those under age 20 were from minority populations, the report shows.

At the time the 2014 report was issued, Kenneth Johnson, senior demographer at the Carsey Institute and professor of sociology at UNH, said, “While conventional wisdom says that increasing diversity is primarily a big city phenomenon, the evidence suggests otherwise. In fact, the largest absolute and percentage gains are outside the urban core counties of metropolitan areas with more than one million residents. The suburban and smaller metropolitan counties are home to 45.1 million of the nation’s 82.5 million young people.”

“As the nation moves toward transitioning to an official minority-majority population, college campuses are more important than ever as the starting place for diversity programs that close achievement gaps and feed a varied workforce population,” says Paul J. LeBlanc, president of Southern NH University in Manchester.