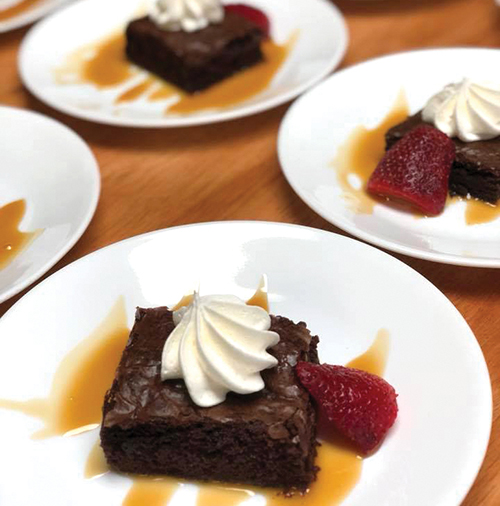 A dessert offered at Wadleigh House in Dover. Courtesy photo.

Sam Fazio was going for an elegantly modern al fresco feel. He envisioned guests dining outside in the sunshine and kibitzing while nibbling on carved flank steak and cedar planked salmon. But some of the guests had other ideas.

“Some of the residents came through the line and they were like, ‘Where are the hot dogs?’ Where are the hamburgers?’” says Fazio chuckling. He is the director of food services-lifecare and dining programs for Harvest Hill Retirement Community and The Woodlands Independent Living, both located in Lebanon.  “So I actually had some staff go down to the freezer and get some hot dogs out, and I made it come true. I was slightly disappointed, but I wanted them to have what they were looking for, and they loved it.”

Fazio’s anecdote highlights a paradigm shift in the way retirement communities approach food and dining for their residents. Gray meats and nondescript soups in sterile settings have given way to carving stations, fresh produce offering more choices and dining rooms outfitted with waiters and ambiance.

The growing elderly population in NH has driven the proliferation of assisted, independent and senior living facilities across the state. According to Seniorguidance.org, a website that helps seniors and their families locate retirement communities across the country, there are at least 179 in NH.

Facilities are not only using the dining experience as a way to stand out from the herd, but also as a way to meet the expectations of their clientele. “It’s definitely a growing business,” says Chris Gelinas, administrator of Wadleigh House, an assisted living home in Dover. “There are a lot of assisted livings popping up all over the place. … And food in assisted living is a major piece. I think a big piece of that is residents have activities going on throughout the day, but one of the things they look forward to is having a meal. Having good meals for each mealtime is a big thing.”

The Foodie Factor
The numbers demonstrate the importance of quality food to retiring boomers. According to a 2017 A Place for Mom Senior Living Preferences Survey, dining quality was in the top five of the most important considerations when choosing a senior living facility, right up there with cleanliness, friendliness of staff, affordability and care quality. The survey showed that 77 percent of folks looking at assisted living facilities and 74 percent of those looking  at an independent living facility said dining quality was “very important” or a “must have.”

Dining is also how this group spends a significant portion of their day. According to the 2017 American Time Use Survey conducted by the Bureau of Labor Statistics, people aged 65 to 74 spend 1.26 hours a day eating and drinking. For those 75 and older, it’s 1.39 hours. While not by much, it is longer than the average, which is about 1.15 hours. And when you further consider many seniors view meals as part of their leisure—and that those older demographic groups respectively spend 6.92 hours and 7.6 hours per day on leisure—food is a crucial component of their day.

As such, more high-end retirement communities prominently advertise the dining experience of the facility on websites, in brochures and on tours. Some places even include bios of their chefs on the website, touting his or her usually impressive previous restaurant experience to further beef up the bona fides of their dining program.

Variety—The Spice of Life
As for the dining programs themselves, retirement community officials say it’s all about options. Where once the food programs may have been more regimented and even dictated by corporate owners from afar, today’s dining programs are all about meeting the individual needs of the residents whenever possible.

The Summit by Morrison, a new assisted living facility in Whitefield, will offer a menu that includes salads, six to eight entrees, a number of desserts and a variety of beverages.

Likewise, the Woodlands also offers residents several choices at dinner, including two entrée specials as well as grilled steak, poached salmon and a grilled chicken breast, a nightly salad bar and an array of desserts and ice cream. Fazio says his philosophy is to say no to a resident as little as possible. They might be having steak on a given night, but if a resident feels more like having a sandwich, the kitchen will gladly accommodate.

The Personal Touch
A dining program worth its salt will stand out for the personal touches the staff can bring to the table.

Gelinas of Wadleigh House says they can easily adapt their menus to accommodate folks with food allergies or who may have trouble chewing and swallowing, among other challenges. Again, he says, this is something that is now expected. A one-meal-fits-all approach just isn’t where the industry is
at anymore.

For Fazio, that means getting out of the kitchen and into the dining room to get to know the residents, what they like and what they need. He says he regularly has his chefs man carving and omelet stations, assist residents with their food and mingle. “That way they’re personable with the residents,” Fazio says.

But creating a value added dining program is more than just having good food and service, it’s also about creating an experience that replicates both the excitement of a restaurant and the feeling of home as well, says Chad Dingman, the CEO of Summit by Morrison.

For many communities, that means having a wait staff to take orders and serve food and creating a fine dining or bistro-like atmosphere and sometimes both in the same place.

For example, the dining room at River Woods in Exeter features tables set up restaurant style topped with crisp linens and folded napkins in a cozily lit room where wait staff serve residents. For a place like Summit, it means having a dining area with large windows offering views and a grand piano.

“The food still has to be very good. But the other part you have to think about is the engagement factor, the socialization, the activity of it, that rings as important as just the food itself,” Dingman says.

Many retirement communities offer private dining rooms where residents can invite family for an intimate supper. Gelinas says his chefs keep comfort foods like homemade macaroni and cheese or meatloaf consistently in the rotation to provide that homey feel. Further, Fazio says he regularly gets recipe suggestions from his residents and does his best to “bring them to life.”

Farm-to-Table
Several programs also offer, as much as possible, farm-to-table ingredients, which a decade ago would have been rare, but are now expected because that’s the way residents were eating and buying—and sometimes growing—before they came to the facility.

At Benchmark Terrace, a retirement community in Manchester, fresh ingredients are prominently advertised in the description of its dining experience. Dingman says eventually, they’d like to take that idea one step further and actually create a garden on the grounds. In the meantime, he says, they, like other communities, scour local farmers markets during the season to bring residents fresh foods.

“The other day they made a brown sugar banana cake,” Gelinas says. “It’s a lot of really different things that we’re trying out with the residents, and it’s been kind of a fun process. And it’s been fun to observe and enjoy the residents looking forward to seeing what’s for dessert every day.

“And when you come into our building, it always smells like whatever is cooking. It’s great,” he says.

At the heart of this trend, though, is the sense that retirement communities are responding to the desire of not only the residents, but families who often help make the decision for their loved one and want peace of mind.

“Food is an important part of anyone’s day,” Fazio says. “It’s the one thing that changes. We have the opportunity here to be able to focus on each resident. We’ve been able to tailor menus to people’s needs. Because we’re so small, we’re intimate with our residents. You can get to know them. Get to know their likes and dislikes. That, I think, is a real personable approach. I think that’s comforting for a lot of people.” 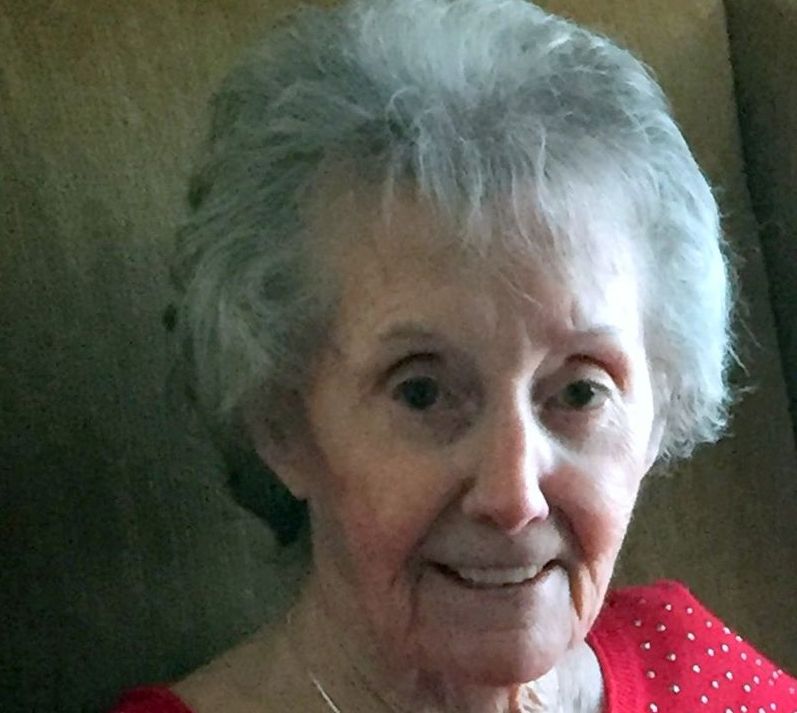 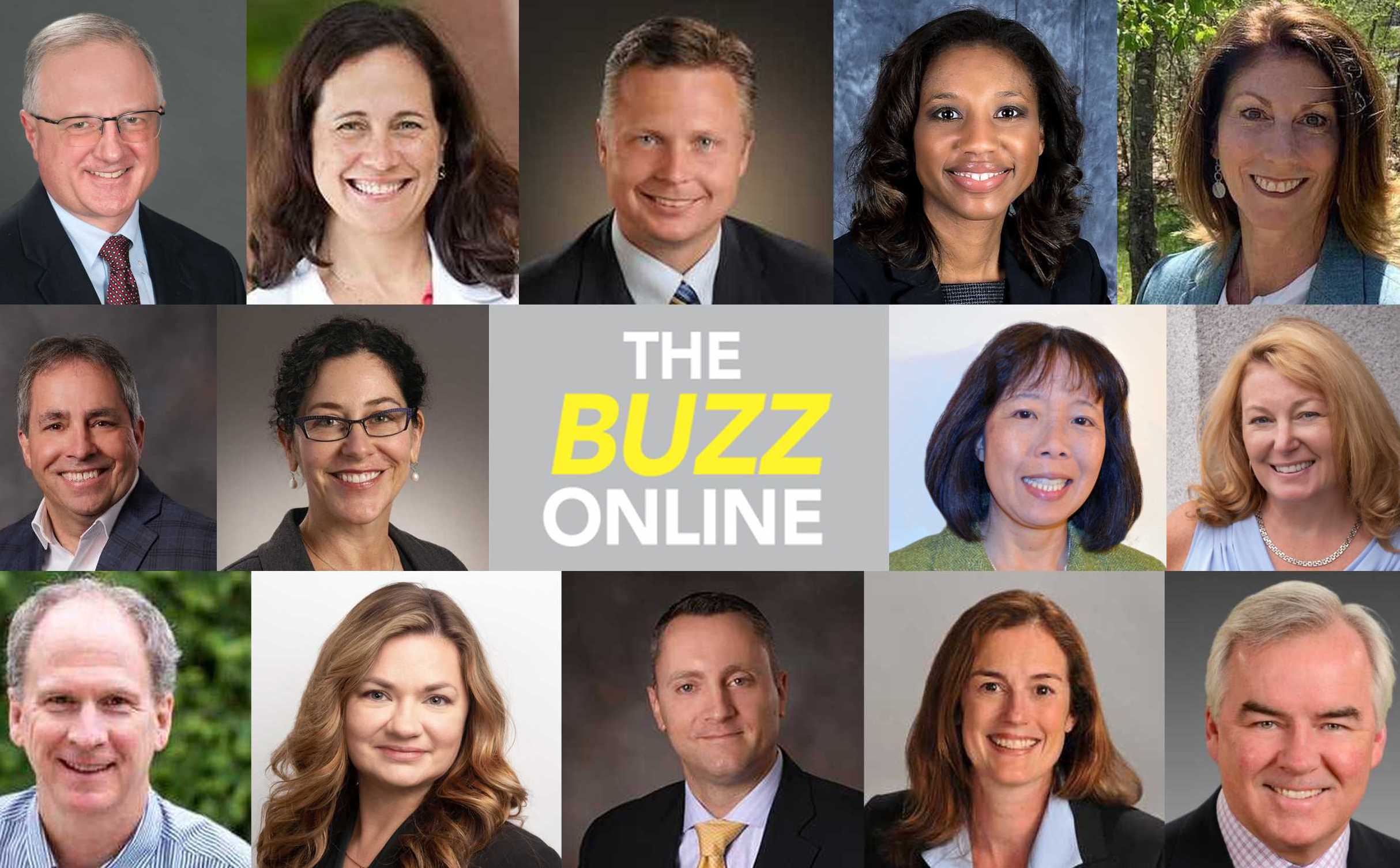