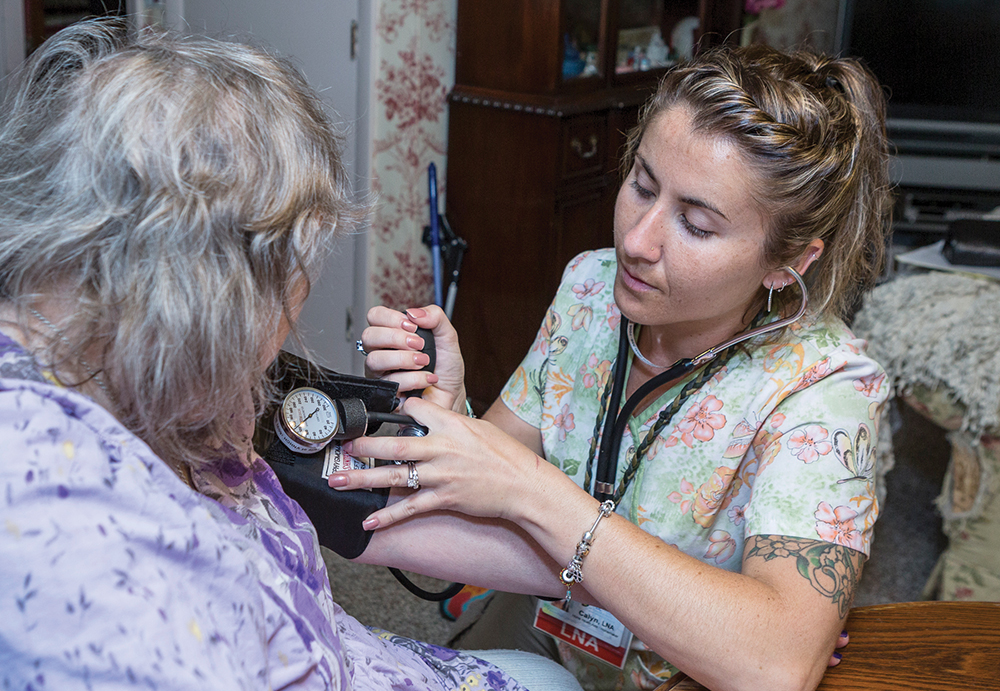 Visiting nurses and other home care providers are finding creative ways to meet the rising demand for their services as NH’s population continues to skew older.

Nearly 18 percent of the state’s 1.3 million people is 65 or older, according to 2017 U.S. Census Bureau estimates, and increasing numbers of them are seeking to “age in place” as they face the health issues and limitations that can come with getting older.

“People don’t want to be in nursing homes. They want to be at home and cared for at home,” says Julie Reynolds, CEO of Cornerstone VNA in Rochester, which annually serves about 3,000 clients, 67 percent of them Medicare patients who are 65 or older. 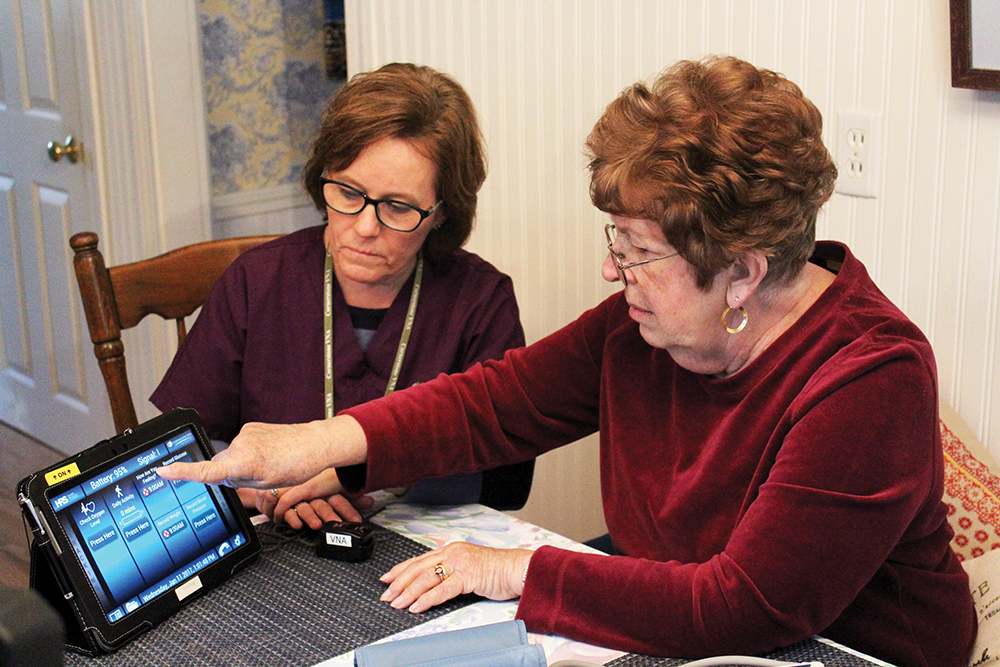 Cornerstone VNA Clinical Coordinator, Anne Carle, teaches a patient how to use a telehealth tablet, an in-home monitoring system for patients with chronic illnesses. Courtesy photo.

Advances in medical technology are allowing people to live longer, driving the demand for skilled home care, Reynolds says. With shorter hospital stays the norm, “Patients are coming home from the hospital sicker, with more complicated wounds or needing IVs or chemotherapy, those kinds of things,” she adds.

The opioid crisis has also affected the VNAs, as home care agencies are vigilant that pain medications are going to the people for whom they are intended. “Patients often need really strong medication so we monitor that strongly,” says Reynolds, adding that discrepancies are investigated.

Visiting nurses provide a range of at-home medical services, from administering medications to coordinating the services of other professionals, such as social workers and health aides, as well as hospice care. Though most clients are older adults, visiting nurses can also provide pediatric care, education and support services to children and their families and services for patients of any age with serious illnesses like cancer, AIDS or diabetes.

That’s due to several factors including the state’s nursing schools are not graduating enough nurses to meet the demand, many graduates seek jobs outside the state where pay is higher and many experienced  nurses are at or near retirement age.

A 2017 federal Health Resources and Services Administration study projected a 37.3 percent shortage in licensed practical nurses (LPNs) in NH by 2030. The same study finds the supply of registered nurses (RNs), who provide more complex care, would be adequate, but does not take into account the number of nurses who leave the state after graduation. In 2016 and 2017, more than 28 percent of NH nursing school graduates chose to test and likely work in another state, according to the NH Board of Nursing. Meanwhile, the average age for a nurse in the state is 45 to 50, according to Denise Nies, administrator for the Board of Nursing, with many seeing retirement on the horizon.

A recent study by Medicare Health Plans, which compares health care plans, found that NH has 9.2 nurses per 1,000 people, well under the national average of 12.8, and that they are paid less than average. “There are only 12,288 nurses for the state’s 1,330,608 citizens,” the report states. “According to the U.S. Bureau of Labor Statistics, the average salary for a registered nurse in New Hampshire was $68,630, which is more than $3,500 below the national average.”

Laura Davie, co-founder and co-director of the Center on Aging and Community Living at the University of NH, points out it’s not just skilled providers, like nurses, who are in short supply. Home health aides, personal care attendants and other non-medical workers who can help with simple tasks or errands are also at a premium. “The need,” she says, “is across the spectrum.”

Balkus says national home care agencies are moving into NH, and she receives calls from people seeking to start smaller, non-medical agencies in the state. All if it, she says, has the potential to further strain resources. “When people call and ask about setting up an agency in New Hampshire,” she says, “I warn them workforce shortages are a challenge for all agencies.”

As more workers consider retirement, agencies are seeking out ways to attract and retain younger workers. “We’re being more flexible, with some schedules that are four days a week and considered full-time,” says John Getts, president of VNA Health System of Northern New England and CEO of Home Health & Hospice Care in Merrimack. 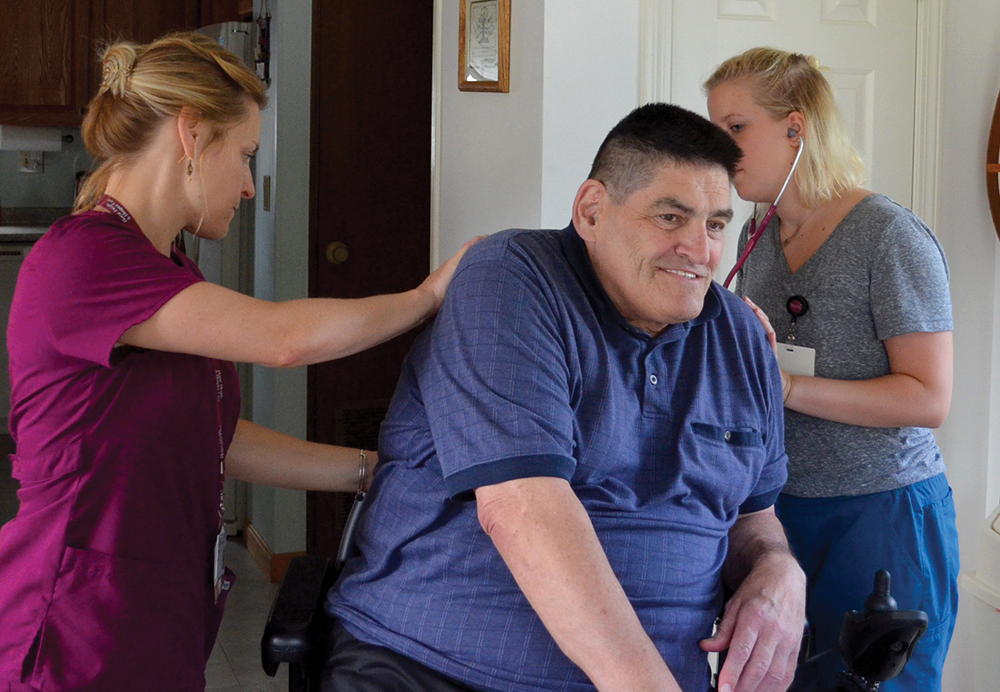 Administrators are also talking up the benefits of the job. “The pay puts us at a competitive disadvantage, so we try to promote the positives of working in the home setting,” says Getts. “Some individuals enjoy that type of independent care.”

On-the-Job Training
Until recently, home care agencies did not like to hire nurses directly out of school because work in the home requires the confidence and competence to work independent of direct supervision, according to Balkus. But some agencies are now developing programs where an experienced nurse works with a new nurse over a set period of time to provide orientation.

VNA Health System of Northern New England, an alliance of six agencies, launched a nurse residency program under which new nursing school graduates will spend a year taking workshops and working with a mentor to transition into home care practice. Nurse educator Kathy Beers has worked with nursing schools in the state to develop curriculum for the program and the first class of eight or nine students will start this fall, according to Getts. “This gives another avenue for nurses to get started directly in a home care setting,” he says.

Relying on Volunteers
For some non-medical patient needs, trained volunteers fill the gap, according to Reynolds, whose agency uses 62 volunteers to supplement the work of its 152 employees. They range from 22 hospice volunteers to 16 “visiting companions” to four pet companion volunteers. “They’ll go into the home and play cards or do an errand,” she says. “They can do errands and take patients out for appointments, take them out to lunch.”

To that end, many agencies, like Cornerstone VNA, offer free educational sessions and healthy living expos to help community members with such issues as advance directive planning or caring for someone who has dementia. Cornerstone also offers free health clinics at senior centers or senior housing complexes to check blood pressure, cholesterol levels and other vital signs to head off health problems.

Telehealth
Some agencies have turned to virtual monitoring to supplement in-home care. Cornerstone VNA has a telehealth program that allows a nurse to see a patient on a computer screen, and vice-versa, to answer questions and supervise medications.

Hannaford Supermarkets provided a $30,000 grant for the program last year, and Reynolds says there are plans to expand the program, which helps some 178 clients annually.

Challenges Persist
But all the executives interviewed agree more needs to be done to address the worker shortfall. More or expanded nursing school programs are still needed, Reynolds says, noting that nursing schools in the state have waiting lists and many schools cannot afford to increase the size of their nursing programs without state aid.

Reynolds also cites a shortage of nursing professors, due in part to many schools requiring professors to have a doctorate “and the pay for a professor is [sometimes] less than what a nurse would get in the field.” Even at schools that accept instructors with masters degrees, “that’s a lot of education for a position that’s not well paid,” she says.

Pay in general is a major factor in the shortage of home care workers, many say.

“The million-dollar question is, it has to be a livable wage,” says Davie at UNH. Especially for non-skilled home care workers like personal care attendants. “They’re doing the work of bathing and care-giving and grocery shopping and they leave to go to work at McDonald’s to get a higher amount of money,” she says.

Changing Attitudes
Finding ways to increase pay was one of the recommendations of a commission convened under former Gov. Maggie Hassan to study the nursing shortage in the state. Reynolds, who was on the commission, says the study led to some increases in state-funded programs for nursing services but nothing beyond that.

The NH Coalition for the Direct Care Workforce issued a report in 2009 calling for the state Department of Health and Human Services to establish a “rational rate setting and reimbursement process” to help home care agencies pay a livable wage to direct care workers. It also urged stakeholders to work with the congressional delegation for more federal reimbursement for such care.

Though the report is nine years old, its recommendations still hold, says Davie, who contributed to the report.

Adds Reynolds, “I would like to see all stakeholders—the state, representatives from the Legislature, colleges, hospitals—do more work on how we are going to manage this. We need more nurses, nurse assistants, physical therapists.”

A shift in attitude about the importance of home care would also help, says Balkus. “A lot of nursing schools are just starting to change the way they train new nurses,” she says. “They almost always trained to a hospital setting. A home care job was not perceived as the most desirable setting. We need to change that perspective.” 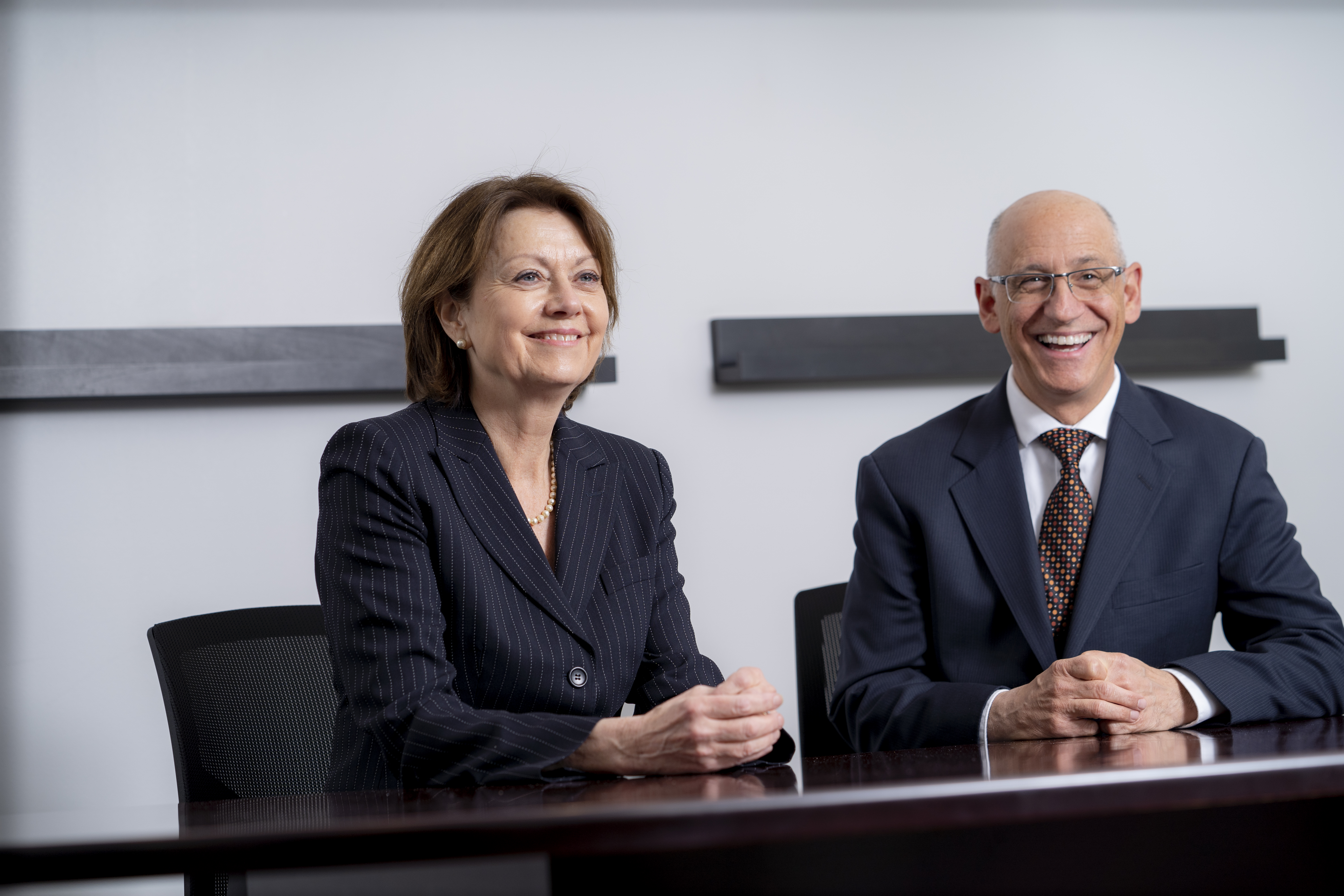 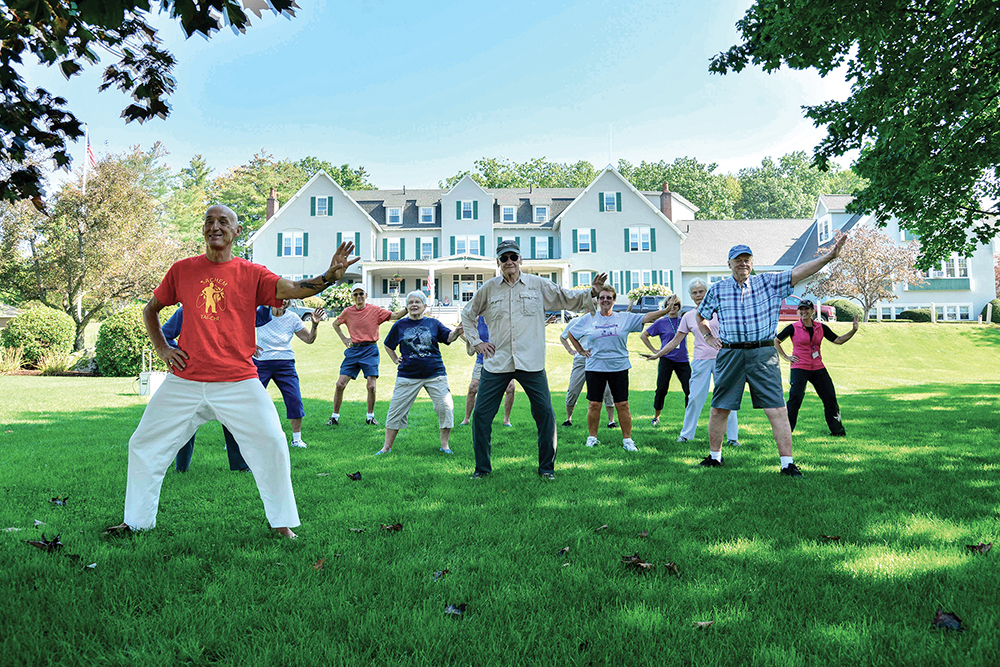 Competition Heats Up at Retirement Communities