The Critical Role of Immigrant Entrepreneurs 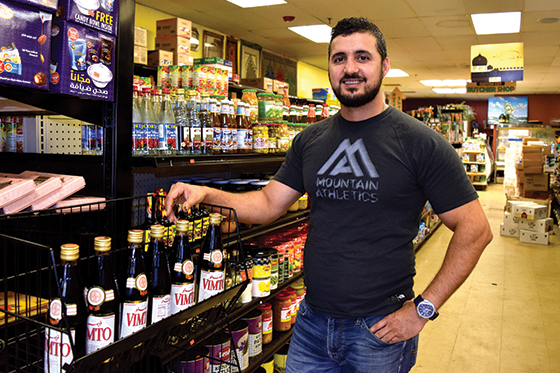 In 1999, Tamam “Tommy” Mohamad, then 21, fled alone from his war-torn country of Iraq and, having spent $5 for pizza and a soda en route, arrived in the United States with $15.

Today, he is a Manchester homeowner, owner or partial owner of two Queen City businesses and a former interpreter/interrogator for the U.S. military whose life story has been championed by no less than NH Democratic Sen. Jeanne Shaheen.

He is also one of an estimated 2.9 million foreign-born entrepreneurs in this country whose companies generated $65.5 billion in revenue in 2014 alone, according to a New American Economy report that drew on census data, the Survey of Small Business Owners and other publicly available data.

The exact number of NH businesses owned by non-natives is hard to determine, says Bruce DeMay, director of the NH Economic and Labor Market Information Bureau in Concord.

The Small Business Administration says that nationally, roughly one in 10 immigrant workers owns a business. New Hampshire is home to some 75,000 foreign-born residents, who are mostly concentrated in the urban communities of Manchester, Nashua and Concord. Some 5.7 percent of business owners in NH are immigrants, according to the Partnership for the New American Economy, and their businesses generate $252 million in revenue annually.

Without immigrant entrepreneurship, NH’s economy “would be tanking,” says Peter Cook, co-chair of the Economic Development and Employment Goal Group of Welcoming Manchester, for which he is also a member of the leadership team. Welcoming Manchester, part of Welcoming NH and Welcoming America, seeks to empower new arrivals and build an immigrant-friendly economy. The group has been working with the Greater Manchester Chamber of Commerce in a joint task force to further immigrant opportunities.

A group of people at a Welcoming NH event. Courtesy photo.

“We need to attract immigrants because immigrants are more likely than native-born people to start businesses,” says Cook, owner of Cook Associates, a culture-building consulting firm. “The future of our state is entirely dependent on building an inclusive economy.”

“Immigrants love to do commerce here because they love to buy things that are familiar,” says Amadou Hamady, Manchester site director for the International Institute of New England. “It’s like going to a store in your neighborhood back in Iraq or somewhere. They love to cook and they need specific spices. They also sell clothes, materials for tea…”

Tamam bought the business for $215,000 in 2010, and says he worked seven days a week, increasing sales 20 percent, before selling it. However, when the business went bankrupt under the next owner, Tamam bought it back in 2016.

Married to a dentist and father of two children, he is also part owner of Basic Car Care Center on Willow Street in Manchester—a typical entrepreneurial pattern for immigrants, according to Amadou, who also does not use a last name. “They start with a small grocery store, then diversify: gas stations, real estate,” Amadou explains. Tamam bought his home and business using personal savings for startup money—as do two-thirds of immigrant business owners, according to the Small Business Administration. He accrued his while working for the Department of Defense assisting the U.S. military personnel in interrogating Iraqi prisoners—work he kept hidden from his family for their safety. “In a helicopter, we would fly over my house in Baghdad, and I’d see my mother out hanging clothes and she never knew,” he says.

Overcoming Challenges
Many non-native business owners are well educated; about 39 percent of the state’s foreign-born population has a bachelor’s degree or better, per the NH Center for Public Policy Studies, but that does not translate into instant opportunity once they arrive in this country.

Tika Acharya, a Bhutanese immigrant who is co-owner of the Himalayas General Store and founder of  AS Insurance, both in Manchester, had a master’s degree in business administration from an Indian college when he brought his family to the United States in 2009. Ethnic Nepalese, they lost their home and all their belongings during persecution of Hindus there. Acharya fled to India, where he received an education with the help of Jesuit priests, while his family spent 18 years in a refugee camp before he was able to bring them all to the United States.

Saying he felt “lost” when he arrived in NH, he and his refugee friends founded a nonprofit, The Bhutanese Community of NH, to help the estimated 2,300 Bhutanese refugees in the state, as well as other newcomers. He also used his insurance background in India to eventually land a job at Citizens Bank and, later, the state of NH. In 2013, he started AS Insurance, which now also has an office in Ohio. The 2,800-square-foot grocery store, operated by his wife and brother-in-law, opened the same year.

His two businesses and the nonprofit together employ more than 30 people and have revenue of $2.5 million, according to Acharya, who also owns his Manchester home.

Continuing education, and learning English, is cited by many immigrant business owners as crucial to success. Even with his master’s degree, Acharya went through a management program at UNH while getting started in business here.

Omar Abouzaid, a Moroccan who owns Pasha Market and Pasha Pizza and Kebob, both in Manchester, was 17 when he arrived 22 years ago with “little English.” The first thing he did was sign up for ESL (English as a second language) classes at then-NH College, then went on to earn a master’s of science in finance and an MBA. “You can’t stay in a country where you don’t speak the language,” he says.

“As an immigrant, there are a lot of barriers,” he adds. “I came with a bachelor’s degree, but nobody would hire me with a bachelor’s.” He started doing assembly work for a manufacturing company in Milford, where a supervisor gave him a chance when an internal credit analyst position opened up. That led to him becoming an accountant in 2004, with dreams of starting his own business.

As any entrepreneur knows, starting a business has its challenges.

Abouzaid and his wife, Ibtisam, opened Sahara Market on Massabesic Street in Manchester, in 2009, only to lose it in a fire in 2012. “We were underinsured,” he says. “It was a rookie mistake.”

With the encouragement of friends, they opened the 2,000-square-foot Pasha Market, which specializes in Mediterranean goods, in January 2013 and Mayor Ted Gatsas attended the grand opening. In October 2016, Pasha Pizza and Kebob followed, drawing mostly “Americans who have eaten American food,” Abouzaid says.

He says the businesses are now at the “break-even” point. “I got into this business knowing it takes time to build a business, and you have to be ready for sacrifices, whether it’s time or pressure or money,” he says. “It will eventually get to the point where it’s profitable.”

Growing a Business
Some immigrant business owners say they face the same struggles that native-born entrepreneurs do in a state with a low unemployment rate—finding good help.

Ahmad Aissa is a Syrian immigrant married to a Manchester native, Evelyn, whom he met while she was studying Arabic language in Syria for her master’s degree. He ran a small retail and wholesale clothing business in the city of Damascus but learned  to make phyllo dough products like baklava as a hobby when a chef friend taught him how.

When he and his wife moved to NH in 2011 after the Syrian conflict started, he enrolled at Southern NH University and soon opened his own business, Aissa Sweets, making baklava and stuffed Mamoul cookies to sell wholesale. He started soliciting businesses like Angela’s, Philbrick’s and eventually Whole Foods, to carry his product. Now Whole Foods is his main client.

Ahmad Aissa, originally from Syria, is the owner of Aissa Sweets in Concord. Courtesy photo.

In April 2016, he moved Aissa Sweets to a 3,000-square-foot space on Hall Street in Concord and added a retail cafe offering sandwiches, salads and more. Now he’s hoping to market sandwich wraps made with phyllo instead of pita bread. “I love the fluffiness of it, the crunchiness,” he says of phyllo. “It’s not too much dough,” he adds, explaining that allows people to enjoy the taste of the filling instantly.

But with 500 customers a month in retail, and production of 700 to 900 pounds of merchandise wholesale, he’s looking to hire a few people—if he can find the right ones. “Another burden is finding the right team with the low unemployment rate in New Hampshire,” he says.

Aissa says he’s glad he started the business because “it brought me into the American culture faster… I’m very thankful for the fact people have been really supportive and nice. It keeps me going.”

William Gillett, former dean of the business school at Southern NH University and a past Christos and Mary Papoutsy Distinguished Chair in Ethics and Social Responsibility at the school, says immigrants may be more driven to succeed than others.

“They have nowhere to go back to,” says Gillett, who is also past chair of the board for the International Institute. “They embrace the culture. In many respects, they’re more motivated. They don’t expect anything to be given to them. Their opportunity and their life is going to be what they make of it. The great gift they’ve already been given is just coming here. It’s just a different attitude. You see this opportunity, coming from a place where you had none.”

It’s a thought echoed by many immigrant business owners, who say they’re willing to go the extra mile to pursue the American dream because they remember what life is like in their homelands.

“I saw my father cry twice in my life,” says Acharya, the Bhutanese immigrant whose family lost everything when they were forced from their home. “Once was when I bought a home here, and we entered the home and he said, ‘After 26 years we have a home’ because he had to leave the house he built in Bhutan. The other time was December 2014 at the courthouse in Concord. Four of us were naturalized: myself, my wife, my father and my mother. He cried while he was holding an American flag.”