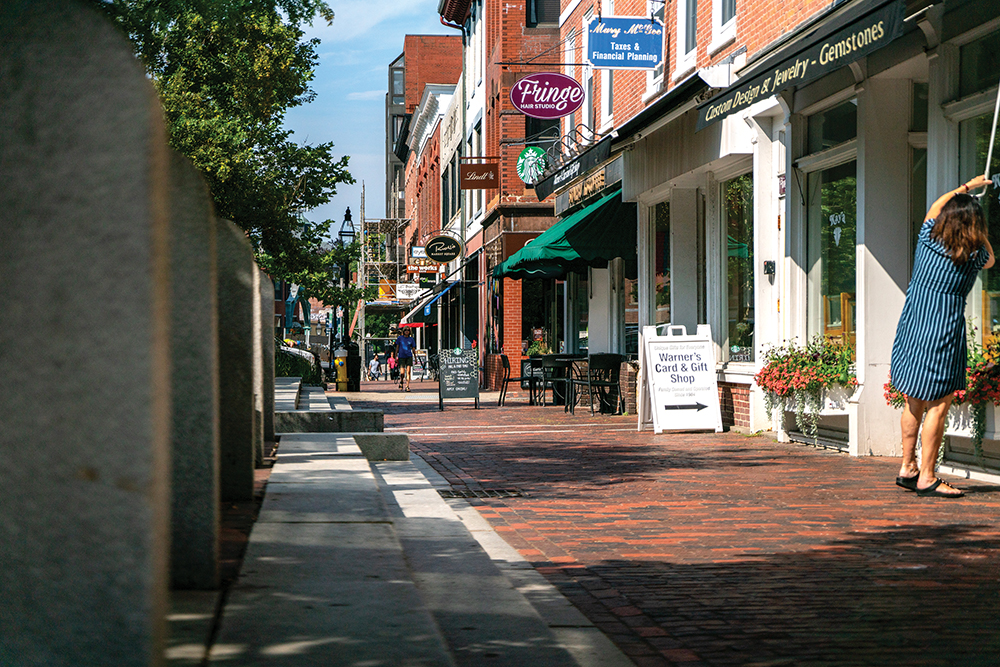 Shops and boutiques in downtown Portsmouth. Photo courtesy of the Chamber Collaborative of Greater Portsmouth.

While large chains and “big box” stores are toppling like oversized dominoes, NH’s independent retailers say they are holding steady against online rivals.

Bruised by internet challengers, giant retailers announced closings of more than 7,000 stores nationwide this year, according to Coresight Research’s July 26 weekly report. Payless ShoeSource alone is shuttering 2,100 shops. And, that’s on top of 5,864 chain-store closings in 2018.

Closings outstrip the 3,055 chain stores opened so far this year and the 3,258 openings in 2018. “In the U.S., year-to-date, announced closures have already exceeded the total we recorded for the full year 2018,” Coresight states in its “Store Openings and Closures Tracker,” and it claims closures could reach 12,000 by year-end.

Sears was among the latest department store casualties in NH. It closed stores in three major malls in Manchester, Newington and Salem in 2018. Walmart in Bedford shut its doors in June.

“2019 is poised to be a transformational year for retail. Technology continues to change the rules of engagement, consumers are more demanding than ever and getting them to notice your brand amid all the noise in the market is an even greater challenge,” states KPMG, a global network of audit, tax and advisory services firms, in its 2019 Retail Trends report.

Despite Closings, Sales Strong
Before Amazon began affecting retail giants, the rise of big box stores—Walmart chief among them—was blamed for the death of Main Street retailers across the country. Now as chain after chain announces mass closings, independent retailers in NH say they are actually seeing business rise. And, while online sales are the fastest growing segment of retail, brick-and-mortar still make up the bulk of sales.

“The feedback I’ve gotten almost across the board is that brick-and-mortar is doing great,” says Deb Jasien, president of White Mountain Independents, a Mount Washington Valley network of locally-owned and -operated retail businesses, and the owner/maker of Fields of Ambrosia in Conway. 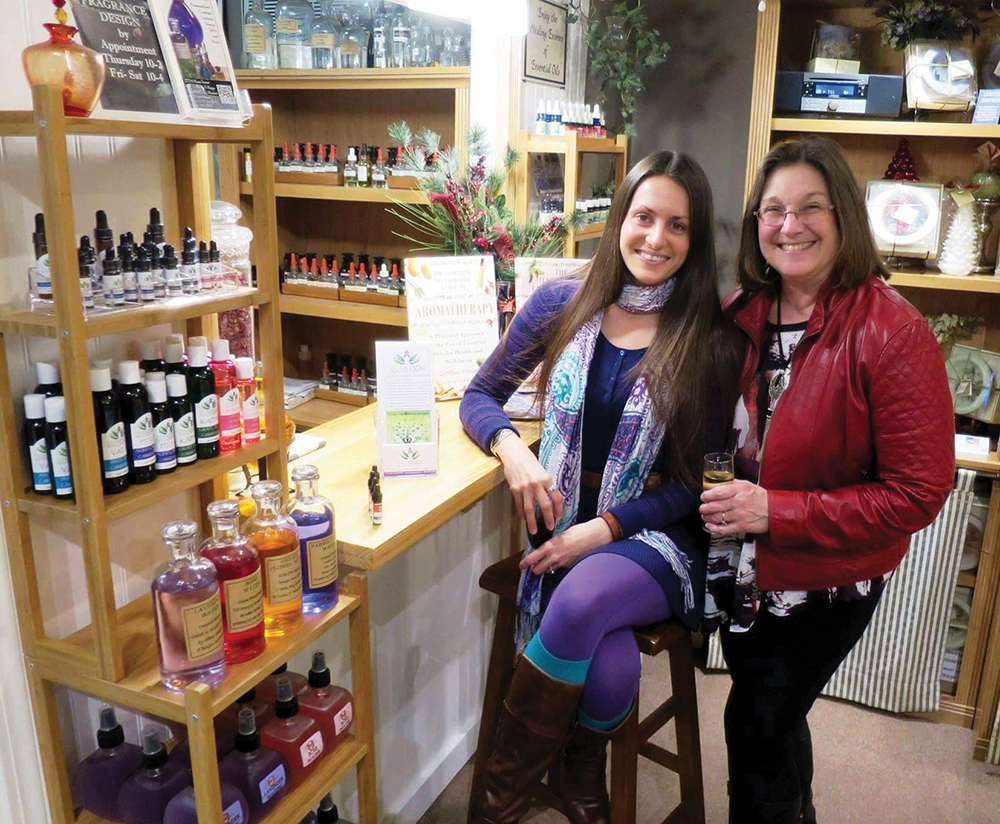 Deb Jasien, right, owner of Fields of Ambrosia, engages with a customer during the shop’s annual open house. Courtesy photo.

Indeed, the retail picture appears far from bleak. In June, retail sales nationally rose 0.6% from May and 2.3% year-over-year, excluding automobile dealers, gas stations and restaurants, according to the National Retail Federation. The federation forecasts retail sales in the U.S. will increase between 3.8% and 4.4% to more than $3.8 trillion in 2019, of which online sales are projected to grow 10% to 12% to upwards of $764.8 billion. Globally, retail sales are projected to rise to $28 trillion by 2020, up from about $22 trillion in 2016, according to Statista.

That’s good news in a state with some 12,210 retailers, most of them small, per the U.S. Small Business Administration. A lack of a sales tax is a regional draw. Nationwide, per capita retail sales are $13,036, while NH’s are $19,268, says Nancy Kyle, president and CEO of the NH Retail Association.

“People come down from Quebec, and across state borders [to shop],” Kyle says. “It’s no coincidence that our major retail outlets are on borders with other states.” 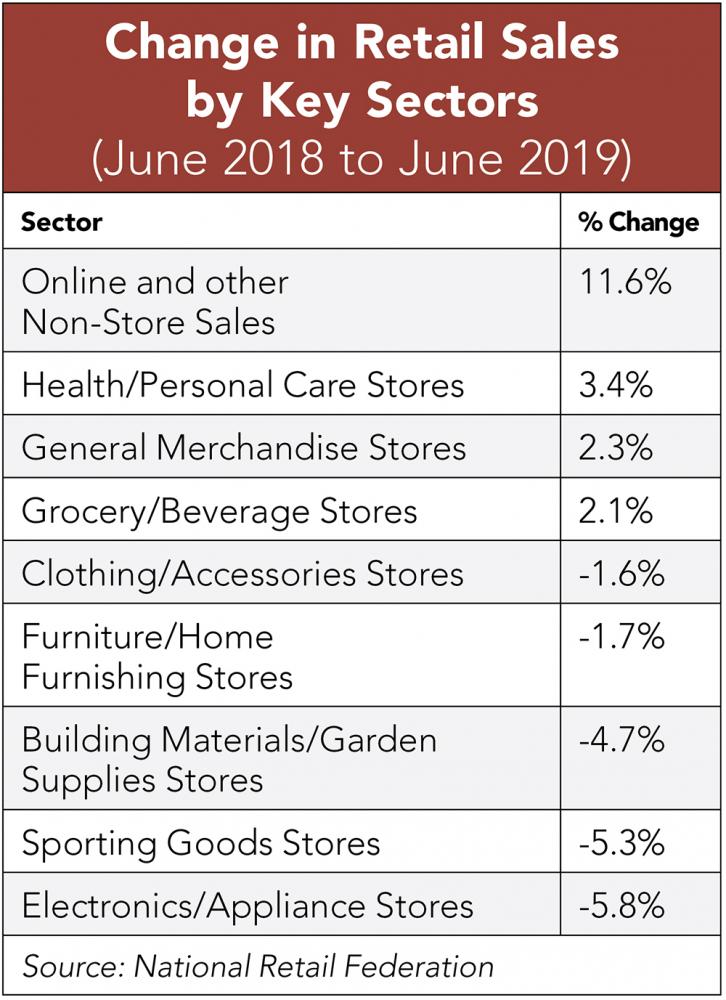 How Independents Compete
Successful retailers cite several reasons for their survival from the proliferation of the “buy local” movement to personalized social media marketing and ecommerce sites, to providing a “personal touch” that Amazon or Wayfair cannot.

“Being appreciative of the fact that somebody went out of their way to go to our store, gosh, we better provide them with an experience they won’t forget,” says Ted McGreer, owner of Ted’s Shoe & Sport in Keene. “That could be anything from shaking their hand, to putting a quarter in the parking meter out front, to remembering their name. These are things you don’t get online.”

McGreer says his business was up about 17% in 2018 from 2017, on top of two years that were “the best in our history.”
Likewise, Jasien of White Mountain Independents and the owner of Fields of Ambrosia, a bath and body shop in Conway, says many independents carry unique locally made products that can’t be found online plus a store owner who is usually present to provide information and accept feedback.

“I think people really appreciate that personal contact,” adds Jasien, who estimates business is up 24 to 27 percent over last year.

Valerie Rochon, chief collaborator at The Chamber Collaborative of Greater Portsmouth, says downtown boutiques are doing well precisely because they are independently owned and operated. 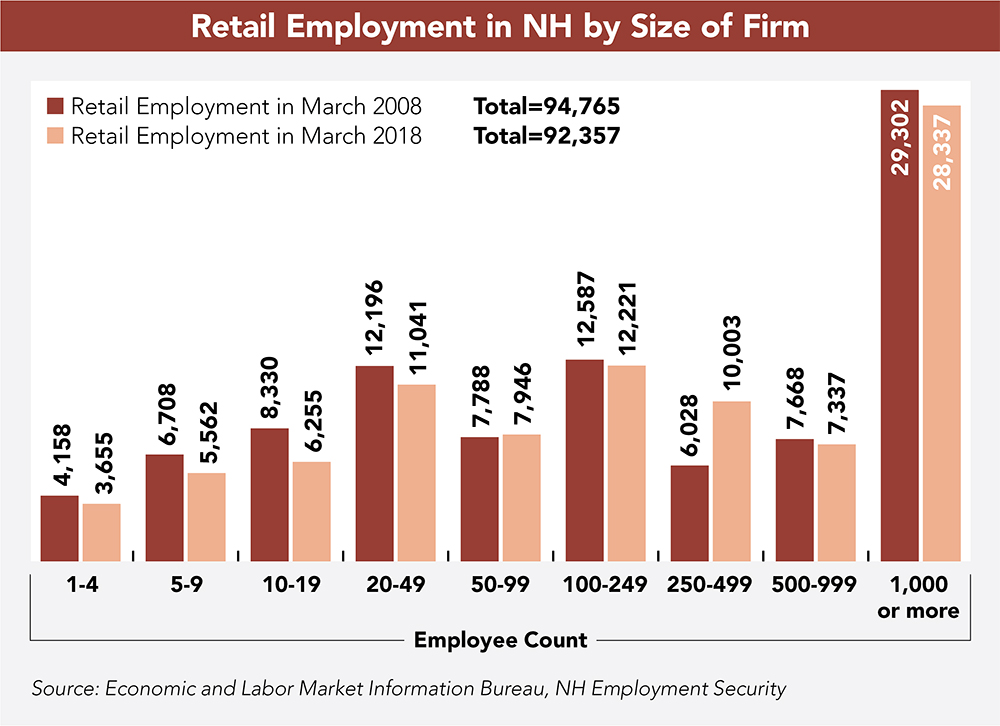 “When you walk in, you can talk to someone who probably went to New York and bought the item,” she says. “Our local retailers like to use the term ‘carefully curated.’ There are many people who are still tactile and want to touch and feel and try on before they buy.”

Even booksellers—one of the sectors hardest hit by Amazon—can be profitable by providing an experience that can’t be found online, according to Michael Herrmann, owner of Gibson’s Bookstore in Concord.

“Books are readily available online, but only if you already know what you’re looking for,” he says. “What you can’t duplicate online is the browsing experience, which is a way to make unexpected discoveries. 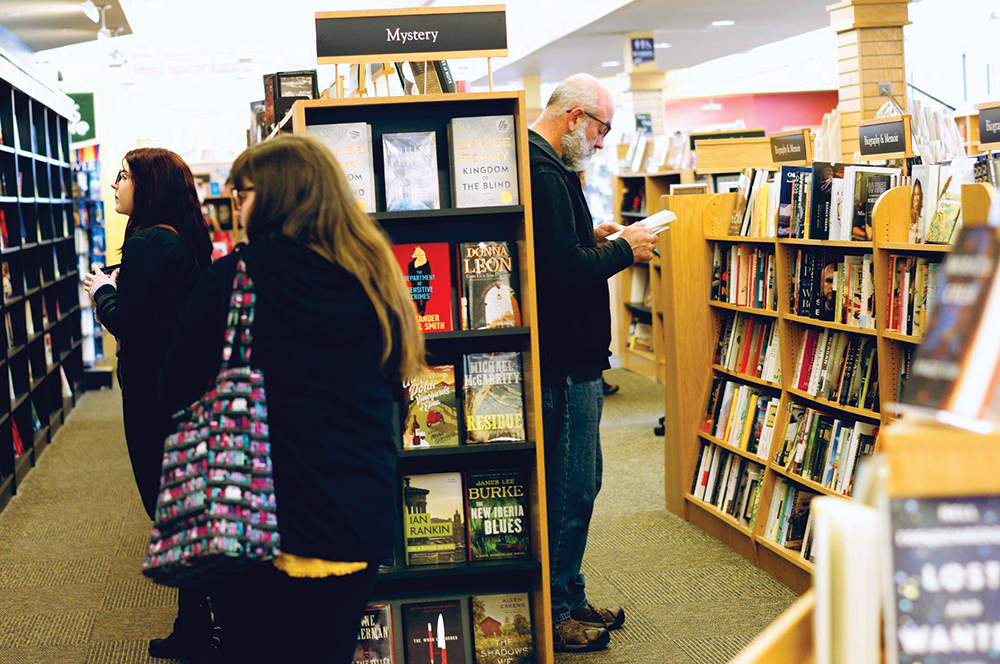 “A good bookstore is a community gathering place that connects neighbors to each other and to the writers they love. That’s another competitive advantage because it’s something people want that we are best positioned to offer.”

Several retailers point out that customers like contributing to the local economy.

Jen Risley is marketing and membership manager for the Monadnock Food Coop, a member-owned grocery store in Keene that is adding 6,675 square feet to its 13,206-square-foot market. “The people who have become members know this is their business, so the health of their business depends on shopping here,” she says. “And our mission is not just to be a grocery store but to grow the local food supply and be a hub for the community.” 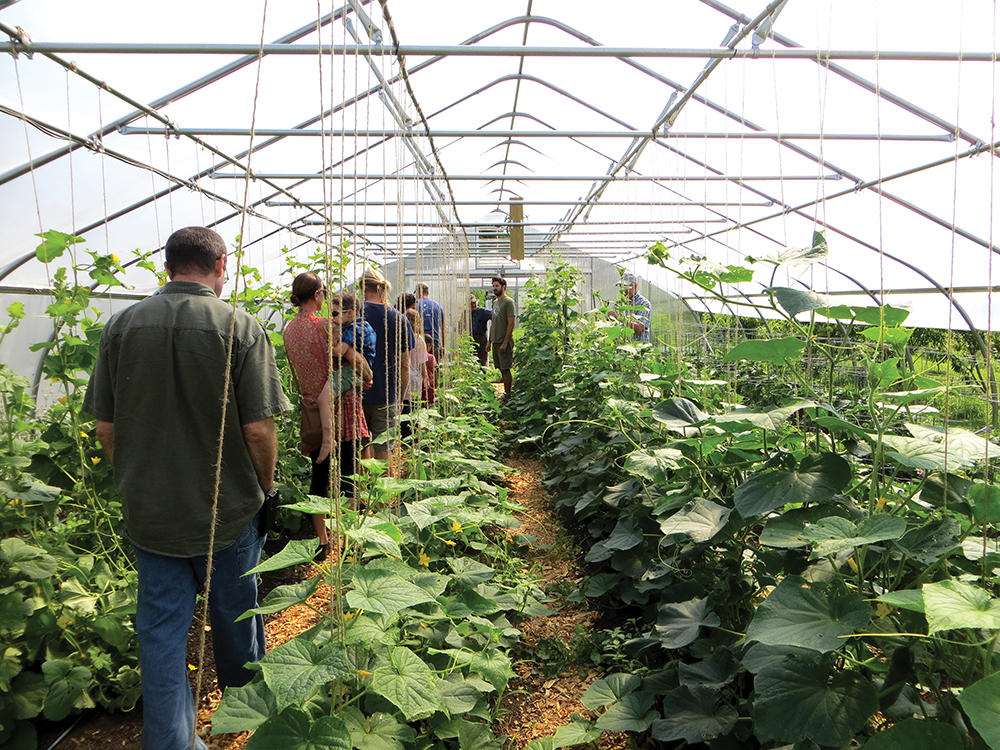 Creating an Experience
But retailers are not relying solely on friendliness and solid product lines to stay profitable.

Many partner with other vendors, stage community events or provide hands-on experiences for customers.

“A lot of them are making their store a destination,” says Kyle of the NH Retail Association.

Providing consumers with experiences seems to be essential. “Experiential retail, or retailtainment, is the future,” states KPMG in its Retail Trends 2019 report, which highlights that 78 percent of millennials will spend money on an experience or event. The report states, “By creating a more immersive experience, retailers can drive people to their stores and ensure they leave not just with products but also memories.”

The Monadnock Food Coop, for example, hosted a community dinner in July to introduce new customers to the market, offering meals at $5 a plate. While store managers expected 300 people to attend, 400 turned out, Risley says. The coop is also collaborating with a local nonprofit to host a farm fair and food festival. It also joined with the NH Food Alliance to increase awareness of Eat Local Month in August through events like farm tours. 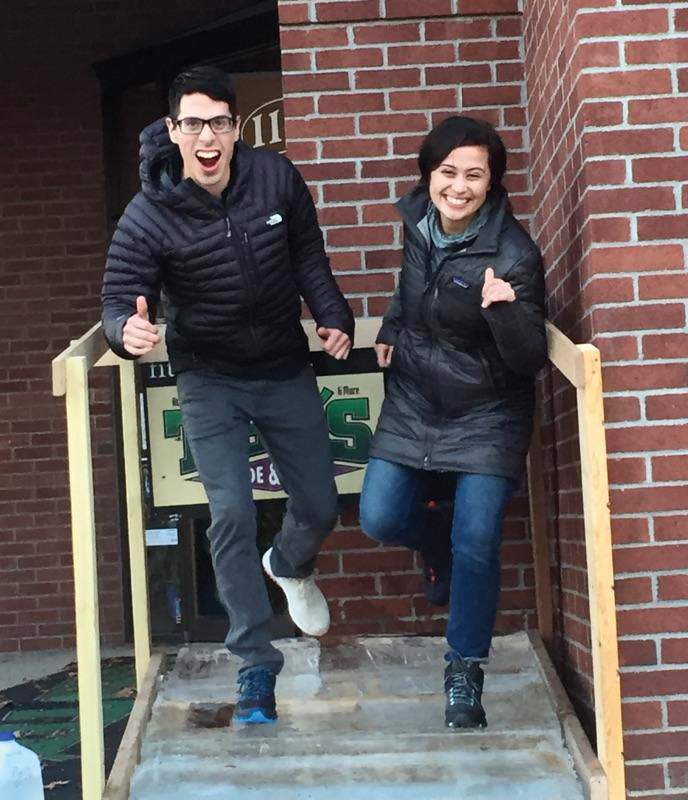 Ted’s Shoe & Sport once purchased a 1,000-pound block of ice and put handrails on it so customers could test anti-slip Vibram Arctic Grip footwear (pictured).

Tackling Challenges
The state’s independent retailers face challenges, including online competition. “Online selling is a double-edged sword,” says Kyle. “It offers great opportunities for small New Hampshire retailers to go global with their products, but they also have a lot more competition. It’s all about customer choice, what is convenient.”

Jasien says most NH independent retailers also have websites so “online isn’t really that big of an issue.”

But Rochon says she knows more than one Portsmouth merchant who had a customer visit a store, closely examine an item, then leave. “You know they’re going to go online and look for it cheaper.”

McGreer points out another e-commerce challenge: vendors who offer a limited amount of product to retailers but offer a greater supply for direct-to-consumer sales. He gets around that by purchasing online if a customer needs a
particular product.

Risley says the food coop is watching the trend toward online grocery shopping  “because our big competitors are offering that.” She says the coop may experiment with online ordering.

A Family Medical Leave Act proposal was another potential threat, she says, as it asks retailers to hold positions open for those on leave. “If you only have five employees, that’s hard,” Kyle says.

Likewise, bills requiring collection of online sales tax could hit small retailers hard because they don’t have the infrastructure to collect taxes for other states, she adds.

Another worry is the rising cost of health care. “It’s extremely hard to offer health insurance if you’re a small business,” Kyle says, noting that about 90 percent of her organization’s 750 members are small retailers.

The cost of doing business poses a challenge for many independents. Risley at the Food Coop cites the twin difficulties of finding employees and being able to pay wages that “don’t put you out of business.”

Some small retailers find their location proves a challenge. In the thriving Portsmouth area, for example, “a bigger pressure [than online competition] for our downtown merchants is rent,” says Rochon “You’ve got to sell an awful lot of scarves or bracelets to cover $6,000 or $8,000 or $12,000 a month in rent.”

Hermann, too, sees no reason why small retailers won’t continue to thrive. “Where we are the obvious winner is our ability to satisfy people’s craving for discovery, experience and community,” he says, “to provide an antidote to the sterility and isolation of living one’s life online.” 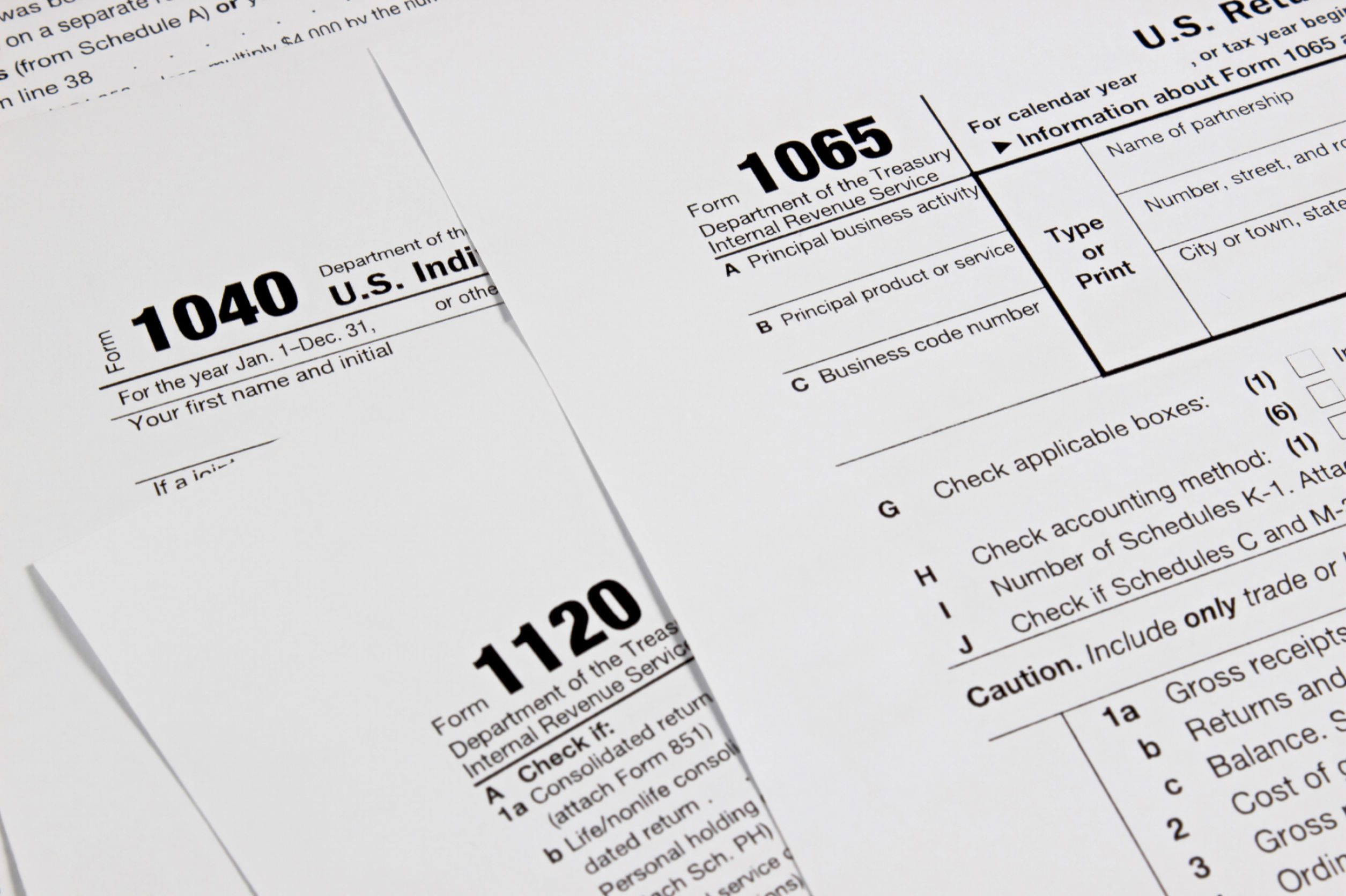