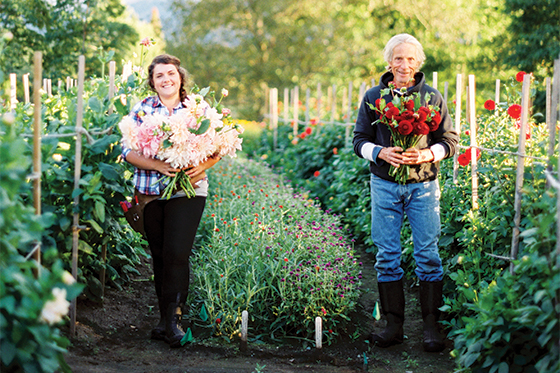 For two decades, the Tarr family has tilled a two-acre parcel of land in Sugar Hill, a small town nestled just outside of Franconia. And while the family originally grew vegetables for themselves and a small onsite farm stand, Vanessa Tarr has spent the last three years rebranding the property as Tarrnation Flower Farm and promoting the White Mountain flower-lover sanctuary through social media.

Before breaking ground in Sugar Hill, Tarr’s dad Reggie spent 30 years running a landscape design company in NH and Massachusetts. He bought the six-acre property from a potato farmer in 1997 and eventually retired from landscaping in 2011 to focus on farming. As a child, Tarr helped her dad tend to the farm, slowly expanding the flower beds. Later as a teen, she worked for a local floral designer and traveled to work on flower farms in Maine, Washington, Panama and Spain.

Tarrnation Flower Farm began coming together while Tarr was on the West Coast. As she wrapped up a seven-month internship in 2014, her dad admitted he was feeling burnt out by the growing demands of the farm stand. He said he wanted to spend more time farming. This prompted Tarr to return to Sugar Hill in 2015 and reinvent the farm as a local flower source.

“It was perfect timing,” says Tarr. “He was getting tired of dealing with the business aspect of the farm, and I realized that I had this great property back home to work with.”

Though the farm’s flower crops vary by season, the soil always remains free of pesticides and other growth chemicals. Tarr says they use sustainable growing practices so flowers can break down naturally and she adds the results are as good as mainstream greenhouses.

“A lot of local floral designers are going down to Boston to buy flowers raised with chemicals,” says Tarr, adding that her goal is to establish Tarrnation as a homegrown source of flowers for wholesalers, businesses and individual buyers.

Tarr credits social media with helping her spread the word. The farm’s online followers have doubled in the past year with more than 1,500 on Facebook and 15,000 on Instagram. Tarr says Instagram has acted as a network to share ideas with other flower farmers around the globe, while Facebook attracts more local people to visit the farm.

Tarrnation has engaged locals through a flower CSA (community supported agriculture) program that runs for 12 weeks each summer. Up to 23 people can participate annually, purchasing a full-share (12 weeks) for $300 or a half-share (six weeks) for $150 and receive a bouquet of flowers weekly. Tarr says the CSA’s first three years have drawn 60 people total and a few repeat customers. She adds that the upfront payments help the farm launch each season. This year’s participants will receive bouquets prominently featuring peony arrangements in the beginning of the summer and dahlias toward the end.

Tarr says the farm also provides bridal bouquets and floral arrangements to weddings every weekend in the summer.

“I started trying different things as a way of figuring out what worked, but as of right now, everything is working really well,” says Tarr. Moving forward, she hopes to increase the farm’s wedding sales and wholesale distribution.

Made in NH Expo in Two Weeks