Restaurant Weeks Can Be Sweet and Sour for Eateries 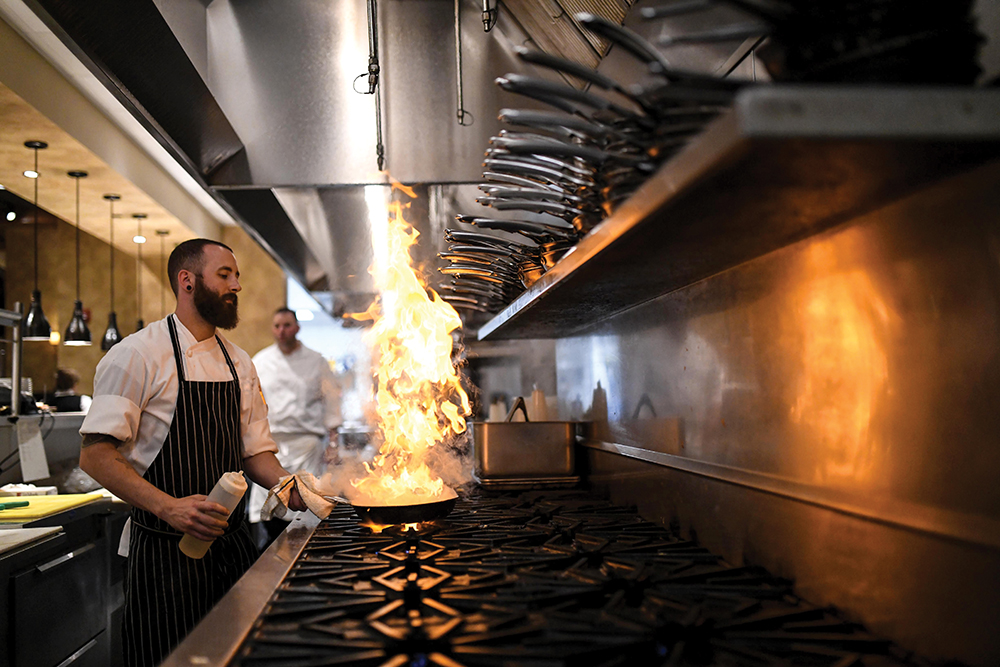 Longer days, warmer temperatures and plenty of mud are signs of spring in NH. For Seacoast residents, dining deals at the region’s many renowned restaurants have become another surefire reminder.

For the past decade, dozens of Portsmouth eateries have joined forces with the local chamber to host a 10-day celebration of cuisine and cocktails. The twice-yearly event, held in March and November, boosts business and puts money into servers’ pockets during a slower season.

The success of Portsmouth’s Restaurant Week, however, has been hard to replicate across the state. The NH Lodging and Restaurant Association (NHLRA), a trade group for the state’s tourism and dining sector, quietly discontinued its statewide event after 2017, and other localized restaurant weeks have seen mixed results.

“There were some state-level initiatives and regional initiatives,” says Paul Shea, executive director of Great American Downtown. “Restaurant Week has become a kind of ubiquitous promotion, and that is why we thought focusing on what makes Nashua special is a better use of our time.”

The concept for Restaurant Week began in New York City as a lunch-focused event in summer 1992. Since then, it has spread nationwide and around the world. The premise is simple: diners  choose either a multicourse meal from a limited menu selection for a fixed price or restaurants create an entirely unique menu.

Prices are typically around $20 for a multicourse lunch. A three-course dinner is around $30 per person. In theory, the model creates a perceived value for the diner, while giving chefs a chance to try new menu options or tweak existing ones. Good experiences can yield many return customers. In practice, though, it doesn’t always work out.

John Akar, co-owner and general manager of Cava Tapas & Wine Bar in downtown Portsmouth, acknowledges that Restaurant Weeks earned a bad rap in some places. One persistent concern was that chefs loaded menus with simpler fare like grilled salmon rather than including options from their standard menu. 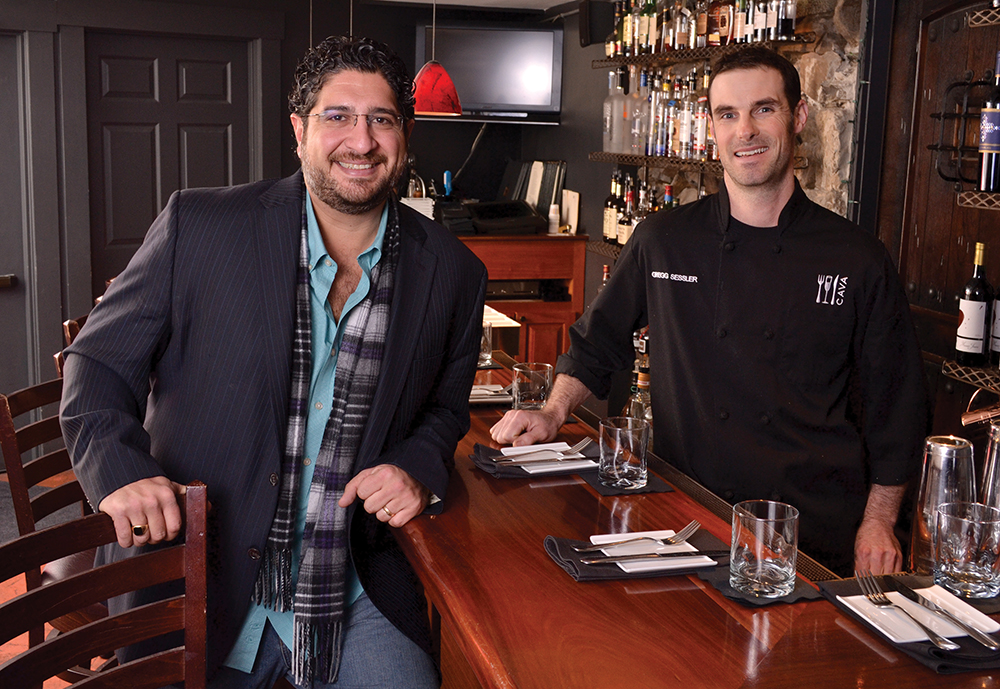 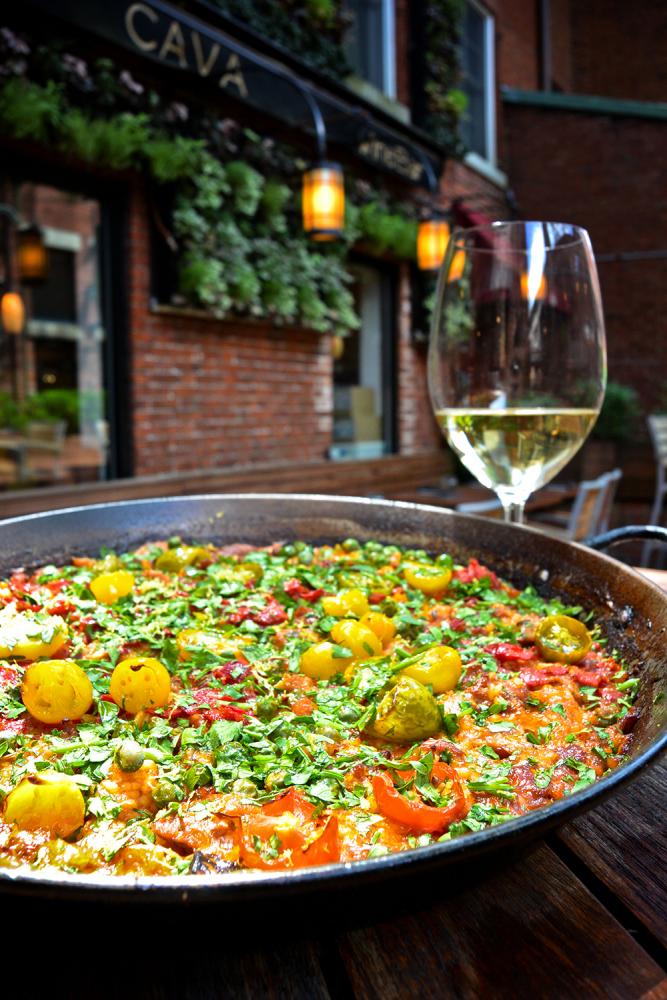 Akar, who helps organize the Portsmouth event, says the Chamber encourages chefs to be creative while also including favorites from the usual menu (such as paella, pictured). With so many new diners coming in during the event, Akar says, why not showcase what you offer the rest of the year?

“Yes, you’re giving that product out at a lower price, so the profit margin is not as high, but at the same time you are doing three to four times the pace of business you’d normally be doing at that time of year,” he says. “I describe it as one of the only types of marketing where you can generate a profit.”

A Statewide Challenge
The NHLRA hosted a statewide Restaurant Week from 2012 to 2017; featuring more than 120 establishments between Conway and the southern border, though  they found it challenging to sustain the event over such a wide area.

“There are some challenges to Restaurant Week as an event,” says Mike Somers, president and CEO of the NHLRA. “They have a tendency to lend themselves to being much more successful when they are held in a small, localized area.”

There must be a sufficient population and a sufficient number of restaurants to be successful, he says. Manchester, for instance, typically generated plenty of business for participating restaurants, while a single participating venue in Auburn or Hooksett likely wouldn’t reap the same benefits.

“We had some restaurants that had great success with it, and those were restaurants that bought into the concept and went the extra mile,” Somers says of the need to promote the business and event on social media and introduce creative menu options.

Restrictions around who can participate in Restaurant Week marketing and promotions is another hurdle for some. Both the NHLRA and the Chamber require participants to be dues-paying members of their organizations. Additionally, the NHLRA charged restaurants a separate fee to participate that Somers says primarily covered marketing costs. In Portsmouth, that fee starts at $275 and can go up depending on when the venue signs up and whether they complete various surveys.

Making It Work
There are 47 participating restaurants during the spring event in Portsmouth, which runs from March 28 to April 6. 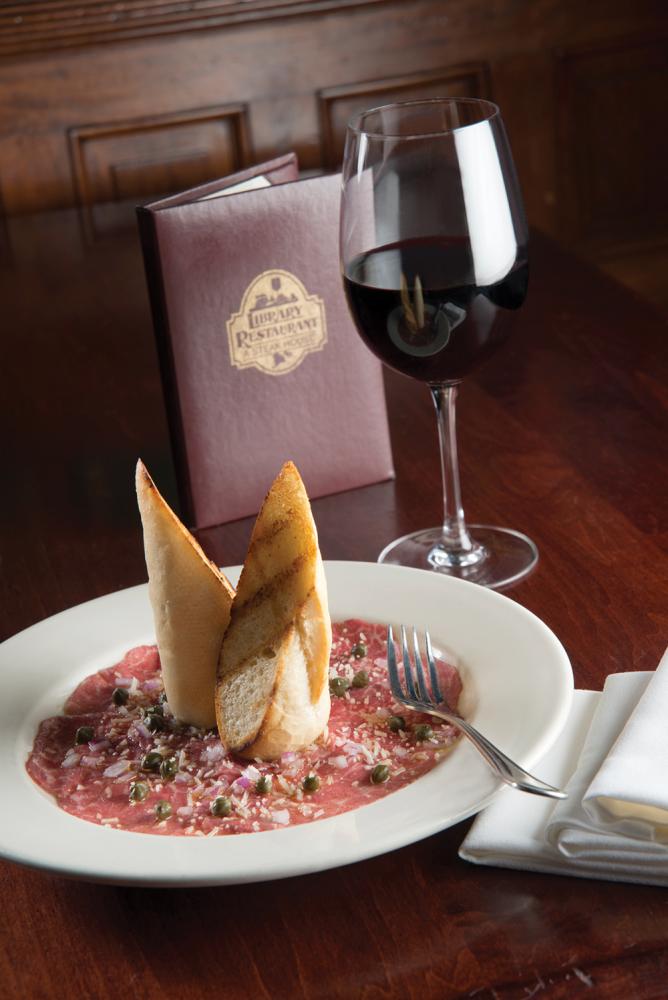 Diners don’t have to venture downtown to find Restaurant Week deals. The Dinnerhorn, Demeter’s Steakhouse, and Vida Cantina are located on Route 1 in Portsmouth, while Three Chimneys Inn in Durham and Anneke Jans in Kittery, Maine, also
are participating.

During Restaurant Week the Chamber gathers data that identifies how many people eat at participating venues, where they come from, and how often they visit, among other details. Past surveys suggest that the event attracts 75,000 people, primarily from within a 30-mile-radius of Portsmouth. Many diners visit more than one restaurant during the week, Rochon says.

The volume of business it generates for restaurants varies year to year, she says, adding, “They are reporting anywhere from 30 to 40 percent higher numbers all the way to 150 percent higher.” 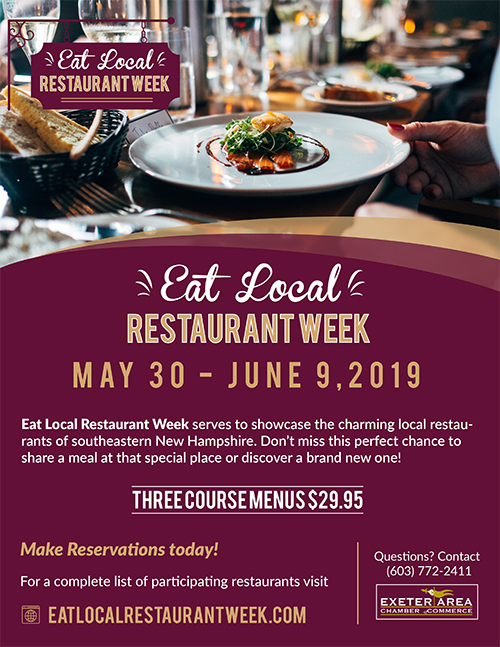 Nearby communities have taken notice of Portsmouth’s success. Dover Main Street launched Dover Dines in 2014 to boost business for its restaurants during the summer months, and the Exeter Area Chamber of Commerce is launching its first-ever Eat Local Restaurant Week from May 30 to June 9. 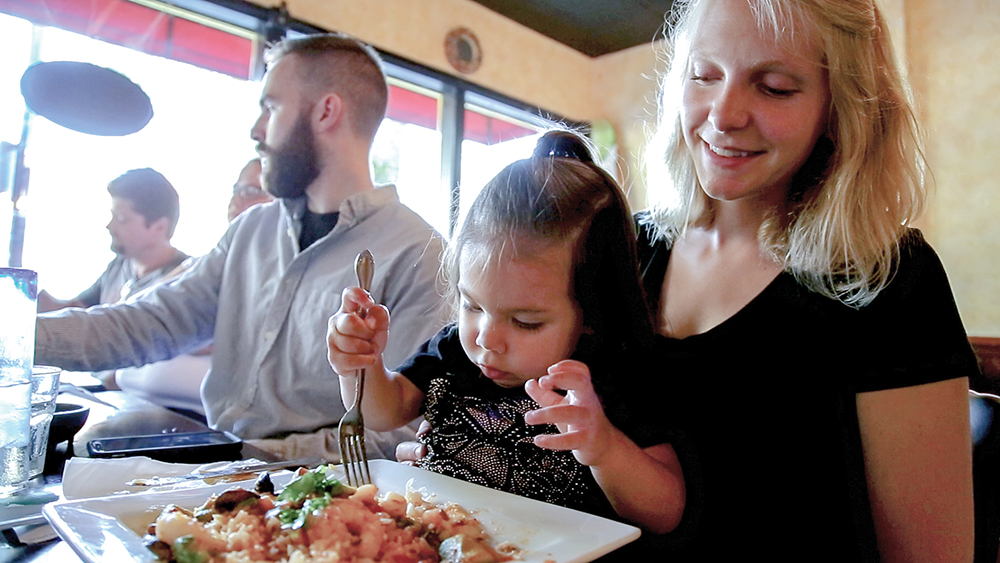 Jennifer Wheeler, president of the Exeter Chamber, says the organization is still recruiting participating restaurants and is looking to “highlight some of the wonderful restaurants we have in the community and showcase all that we have to offer.”

Based on the experiences of other communities, restaurants will not all benefit equally from the new Exeter event, but chefs who truly embrace the concept can turn first-time visitors during a weeklong marketing event into repeat customers year-round. 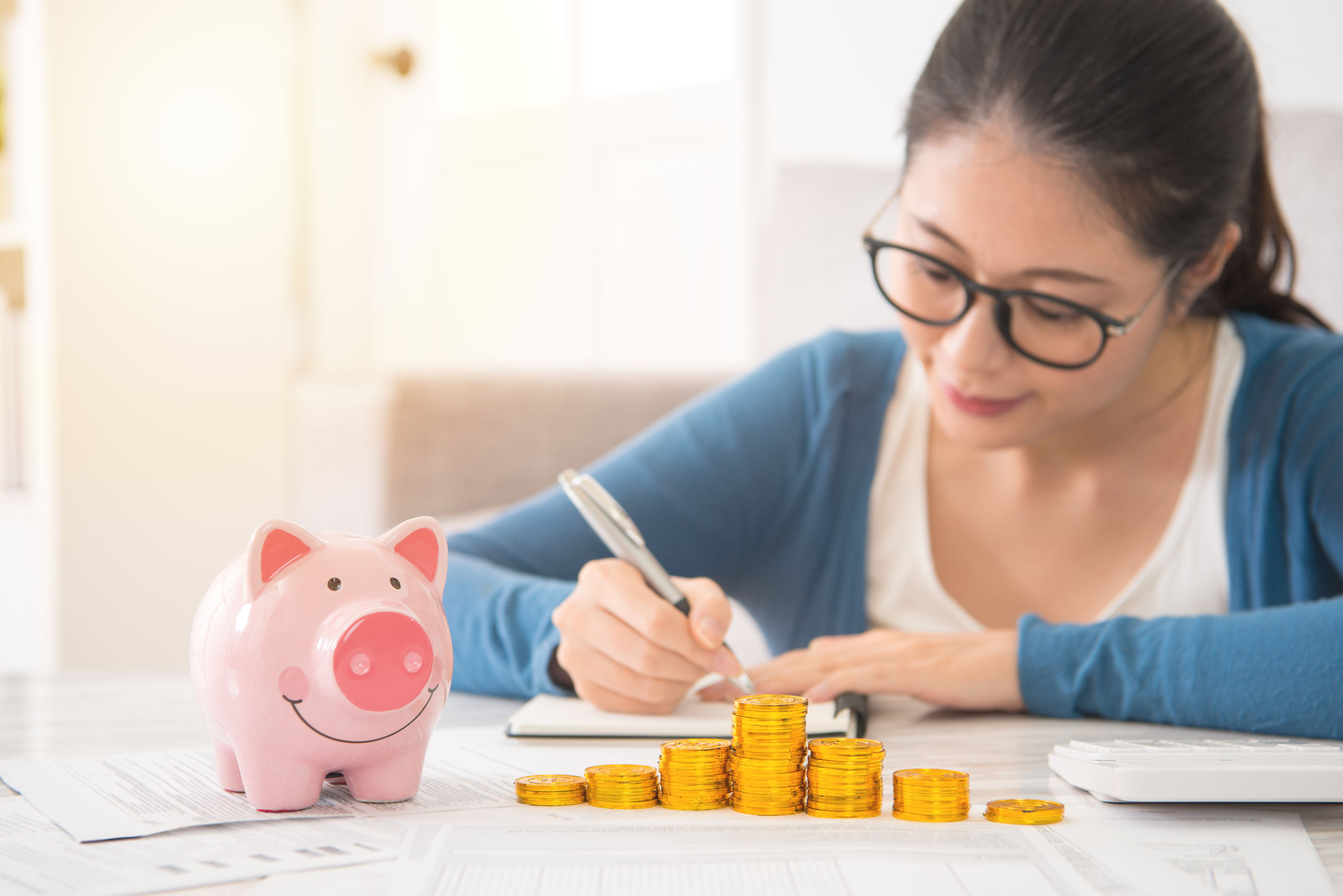 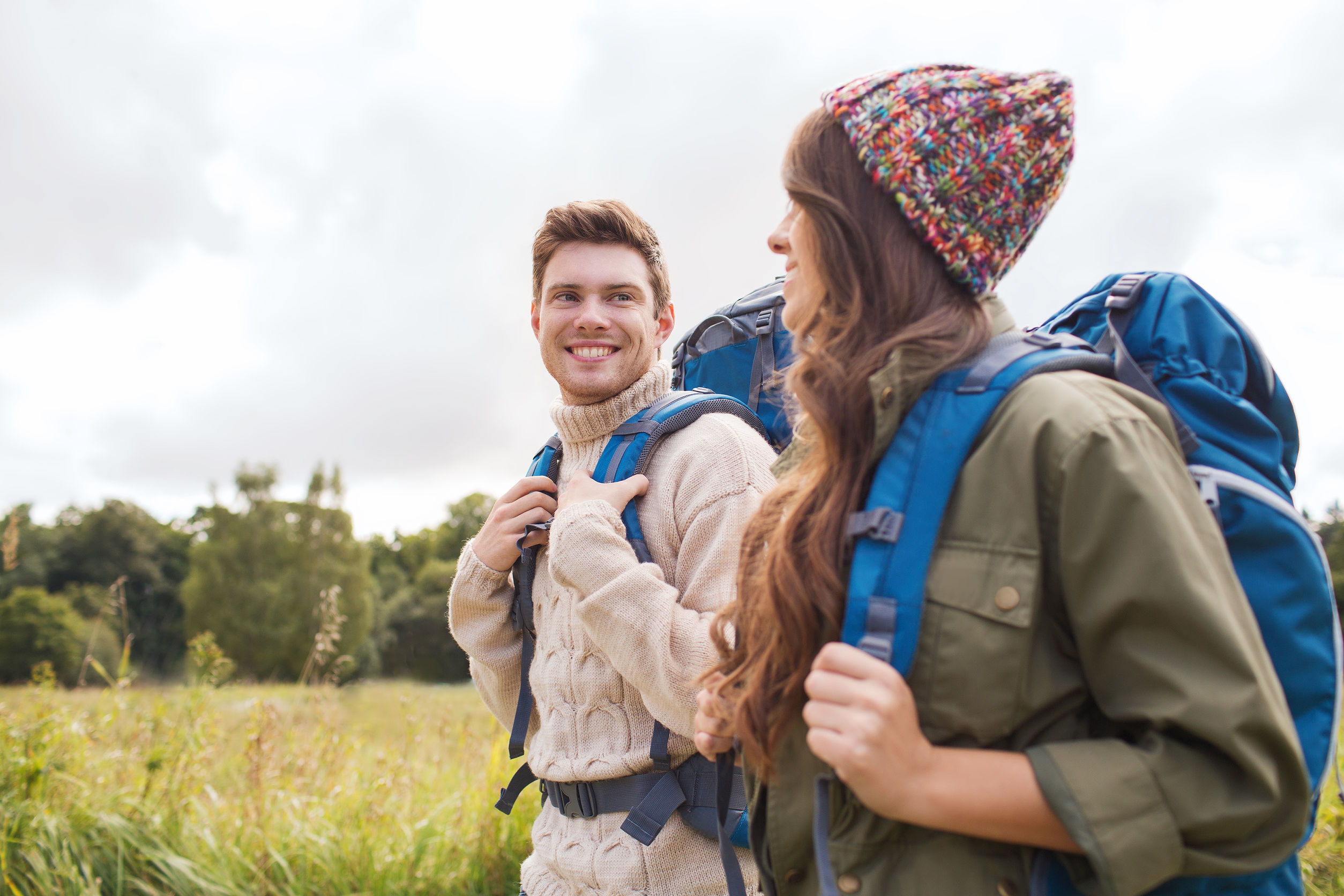