NHâs Growing Gambling Industry is on a Hot Streak 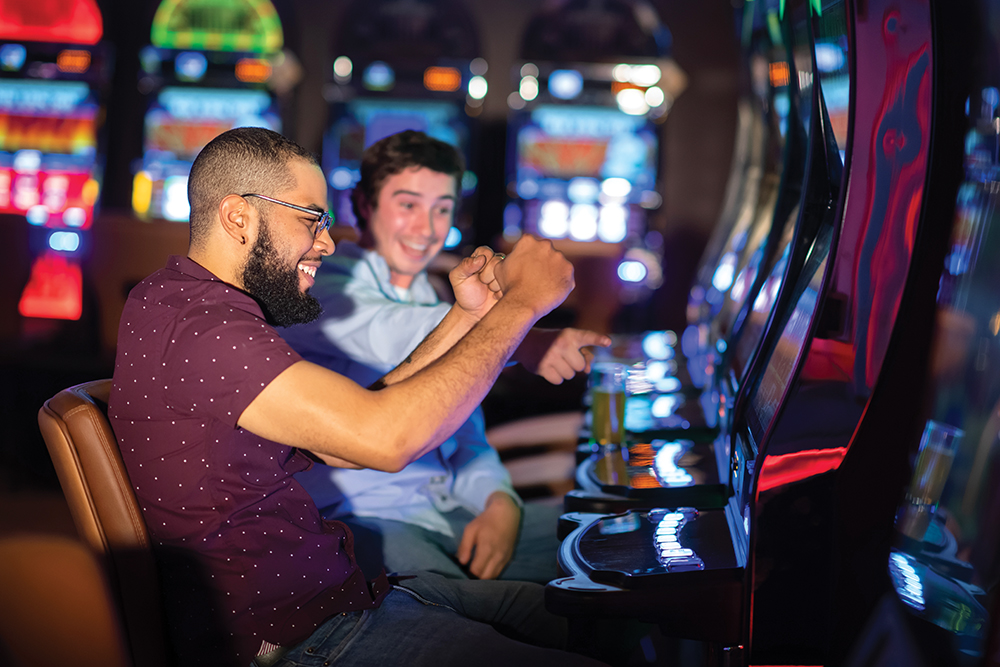 On a Thursday afternoon in July, David Rossetti sat at a blackjack table wearing ear plugs to dampen the pop music that thumped through the casino’s main hall. A dealer in a tie and vest handed out cards. Rossetti, a retired engineer from Saugus, Mass., had two small piles of chips on the table in front of him—one for betting, the other to take home.

“I’m very disciplined,” he says. “Am I gonna lose in the long run? Yes. But I wouldn’t want to be any other place.”

The blackjack table is just one small piece of the action at The Brook, a 90,000-square-foot casino that opened in 2019 at a former greyhound track in Seabrook.

People toss dice onto an electronic craps table. In a separate room at one end of the sprawling building, more than a dozen poker games can be found.

Legal gambling has been growing in the Granite State. Over the past half-decade, lawmakers have authorized several new forms of betting. Charitable gaming—the legal framework under which facilities like The Brook can offer casino-style play—has expanded. And the state has seen gambling-related revenues surge.

The NH Lottery Commission, which regulates the various forms of wagering permitted in the state, took in $304 million in total revenue in FY 2017. In each of the past two years, it’s topped $500 million. “We’ve expanded the size of the lottery dramatically,” says Charles McIntyre, the NH Lottery’s executive director.

NH Bets on Keno, Sportsbooks
That growth has come from existing products—sales of instant scratch tickets rose by nearly $100 million from 2017 to 2021, half of it during the pandemic—as well as several legislative changes.

In 2017, state lawmakers authorized keno, a quick-draw numbers game long popular in Massachusetts, which generated more than $53 million in sales in FY2022.

By 2019, NH was part of a wave of states that legalized sports betting after the U.S. Supreme Court struck down a federal prohibition, partnering with Boston-based DraftKings to operate online and retail wagering. More than $1 billion has been bet on sports in NH in the years since.

The Lottery Commission also rolled out an online platform, iLottery, in 2018 that yielded close to $30 million in sales last fiscal year.

McIntyre says that many NH residents were heading south to play keno in Mass-achusetts or betting on sports illegally, so authorizing those activities allowed the state to benefit from gambling that was already happening to some extent. 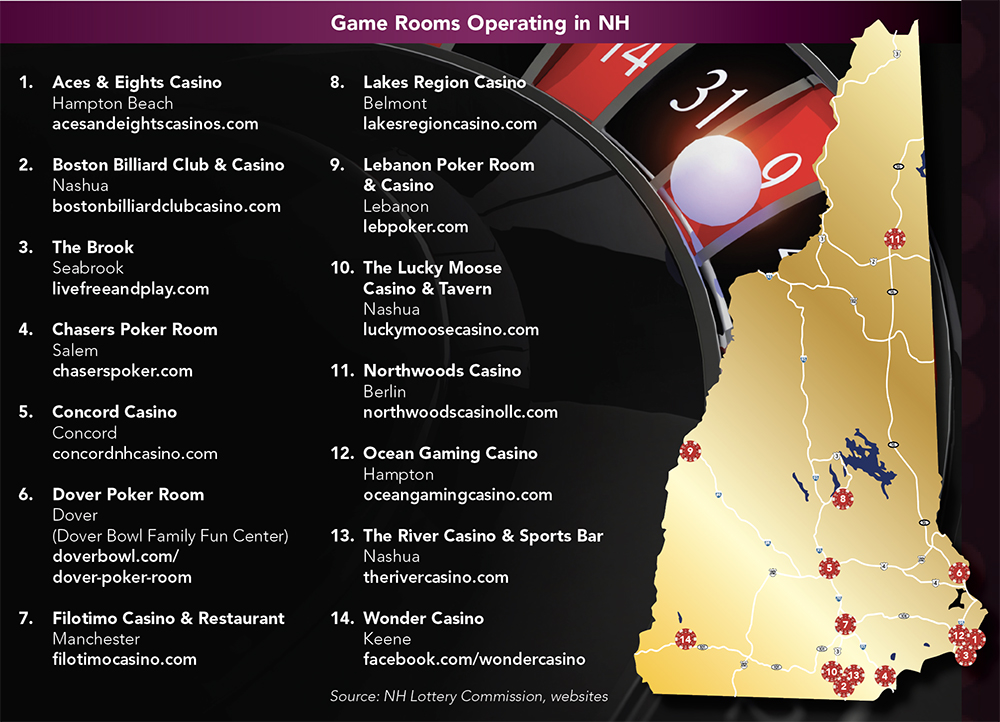 “We used to have regular conversations with people that were taking sportsbook bets and horse-race bets coming into our facility, and that’s an illegal activity, so every time we got wind of it, we would ask them to leave,” he says. “Those people don’t come in any more, because all the people coming in are doing it legally.”

Sports betting has already exceeded expectations, McIntyre says—the state projected $10 million in annual revenue and took in around $24 million last fiscal year. Online has accounted for the vast majority of that, but McIntyre expects in-person betting to grow as the state rolls out more retail sportsbook operations. 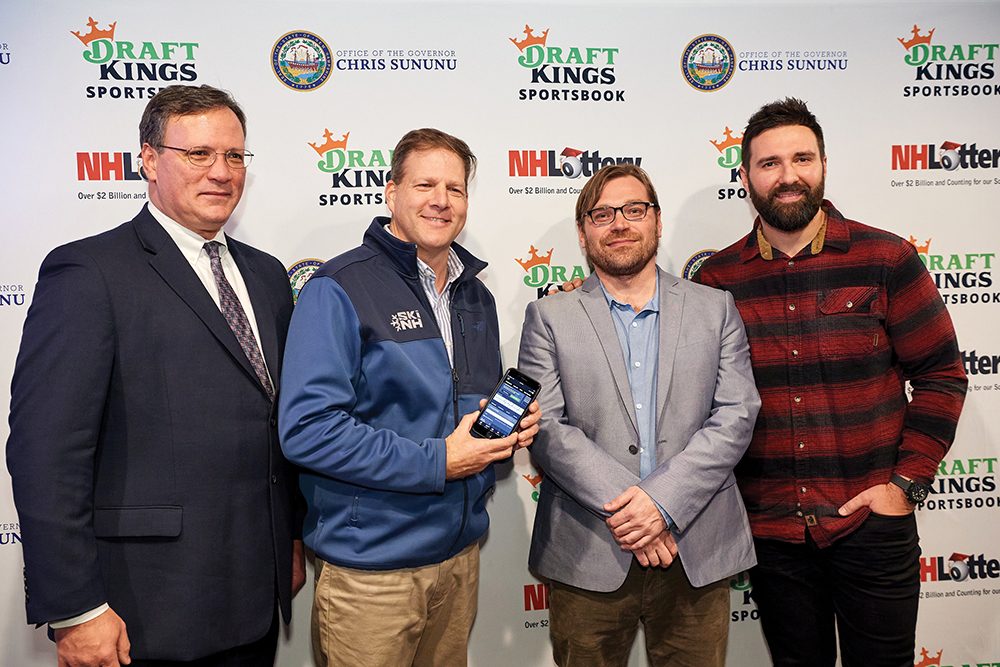 So far, there are three DraftKings-operated locations, one at The Brook and two at Anagnost’s Filotimo Restaurant and Casino branches in Manchester and Dover. McIntyre says more are in the works, including in Nashua, where voters approved sports betting last year after rejecting it in 2019.

It remains to be seen how neighboring states’ moves to legalize sports gambling could affect business in NH. Maine authorized sports betting earlier this year but has yet to launch it, and Massachusetts lawmakers passed a sports-betting bill in early August.

Casino Revenue Grows
Sports betting has been an important part of The Brook’s growth, as has another recent change. In 2021, the legislature authorized “historical horse racing,” or HHR, machines—essentially slot machine-like games that use the outcomes of past races to determine winnings.

Without those bills, “we would have built a very different kind of entertainment complex,” says Andre Carrier,  president and CEO of Nevada-based Eureka Casino Resort, which owns The Brook. “We’d still be creating different ways for people to come out and play and have a good time. But it would have been a decidedly different square footage configuration than what exists today.”

The Brook invested millions of dollars to transform the former Greyhound Park into what it claims is now America’s largest charity casino. 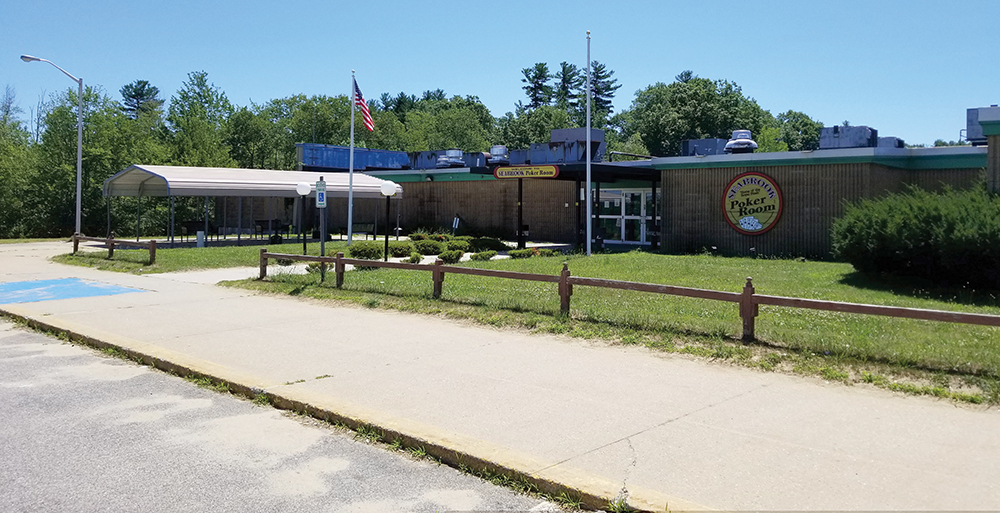 Above: The former Seabrook Poker Room, which was renovated and became The Brook casino, below. (Courtesy of Eureka Casino Resort) 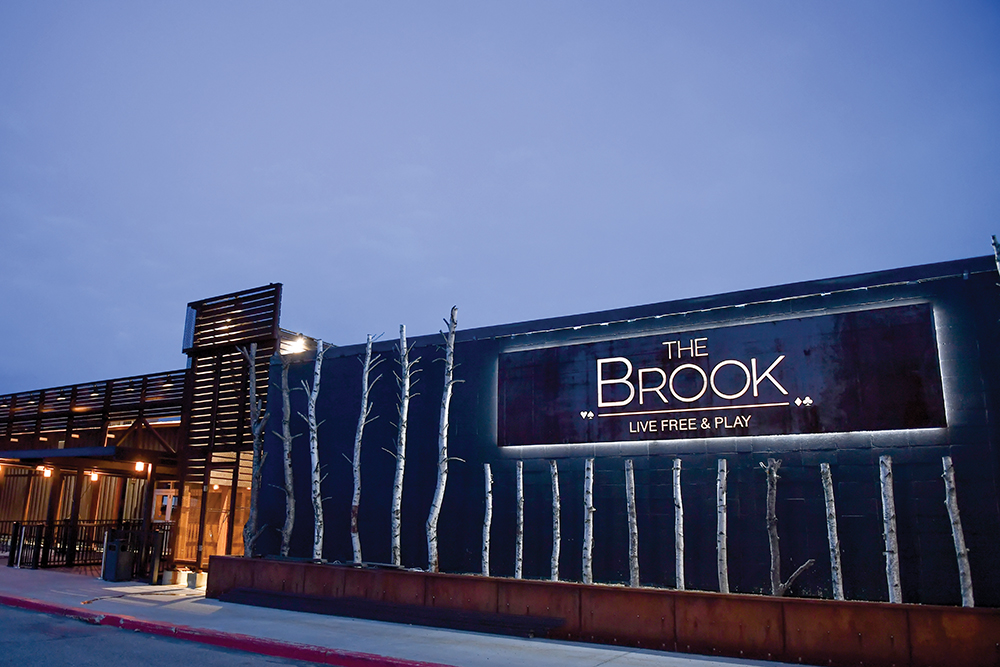 Under state law, businesses that host casino-style games must donate 35% of revenues to nonprofits; the state takes another 10% cut. Players can make bets of up to $10, which the state legislature increased from $4 in 2018.

Charitable gaming has grown significantly in recent years, with total revenue rising from $22.9 million in 2017 to $48.8 million in 2021, according to the NH Lottery. The Brook alone, since 2019, has donated more than $5 million to about 75 NH charities while Boston Billiard Club & Casino in Nashua has generated $13 million for nonprofits since opening in November 2016. Nonprofits received $17 million from charitable gaming last year.

As of July, 13 licensed charitable gaming facilities appeared to be up and running across NH.

Carrier, a Carroll County native, says Eureka wanted to diversify geographically and was looking at New England when it learned the greyhound park—which no longer hosted live races, but still offered off-track betting and other activities—was on the market.

Carrier says The Brook has put millions into renovations and opened in stages starting in 2019, rolling out sportsbook in August 2020 and HHR machines this spring.

Other casinos have also announced plans to grow. The Draft sports bar on Concord’s Main Street launched the Concord Casino in its basement in 2019, according to a Concord Monitor story. This summer, signs informed visitors that the casino was expanding into an adjacent storefront.

In March, Churchill Downs Inc., the company behind the Kentucky Derby, said it had agreed to buy Chasers Poker Room in Salem, with plans to expand and add HHR machines.

Anagnost—who co-owns casinos or poker rooms in Manchester, Dover, Lebanon and Keene, with a fifth under construction in Conway—says he doesn’t see much room for new charitable gaming spots to enter the market with the major population centers already served. 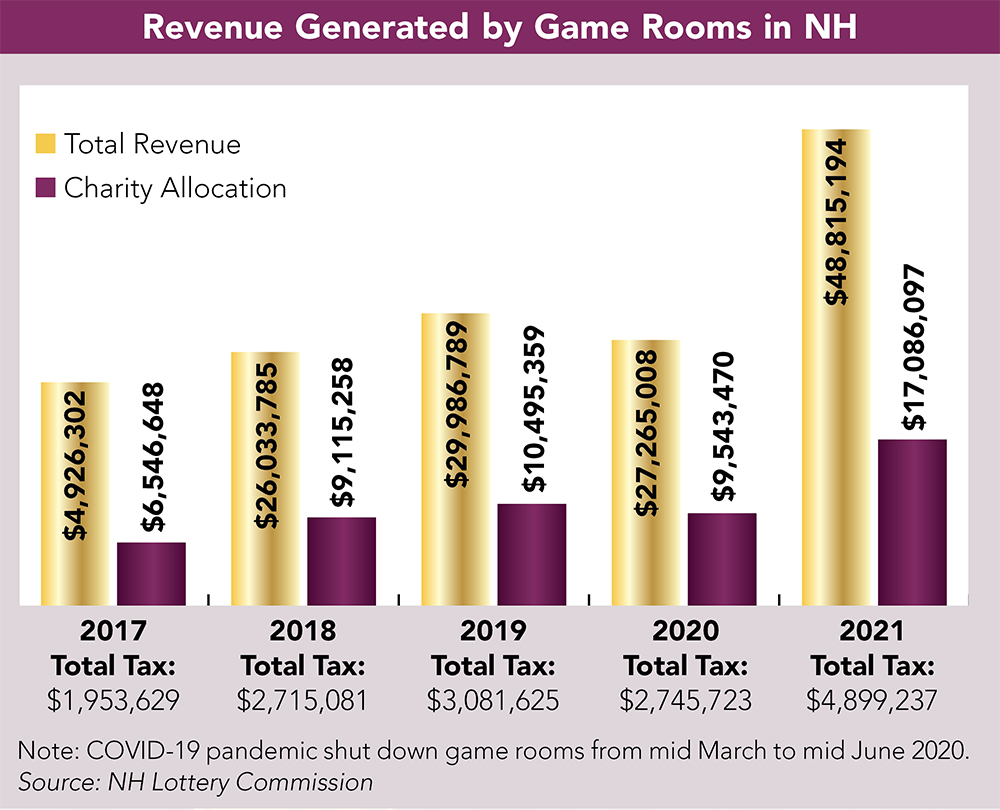 Sorely Lacking Services
Gambling’s growth has led to pushback in some cases. Chasers’ efforts to expand into a vacant former Kmart across the street have been opposed by the property owner. And while more than 90 cities and towns have voted to allow keno, it has been rejected by communities including Concord, Portsmouth and Keene.

Ed Talbot, the director of the NH Council on Problem Gambling, says the recent changes to NH’s gaming landscape have been reflected in helpline calls about problem gambling. “Lottery and casinos were always on the top. Sports gambling was third,” he says. “That was until sports gambling became legal.… Now, sports gambling and lottery pretty much go head to head. Casino gambling dropped back a little bit.”

Talbot, who is himself in recovery, takes no position on which games should be legal. But he says resources to help people address gambling addictions have lagged far behind. “The state is sorely lacking in those services,” he says. As of around 2019, Massachusetts had 49 Gamblers Anonymous meetings, he says; NH had two.

The 2019 bill authorizing sports betting created a new state council on responsible gaming, which is allocating $290,000 over three years for treatment and prevention. Talbot says his organization, which has a state contract to do that work, has started building infrastructure and reaching out to clinicians but more funding is needed. 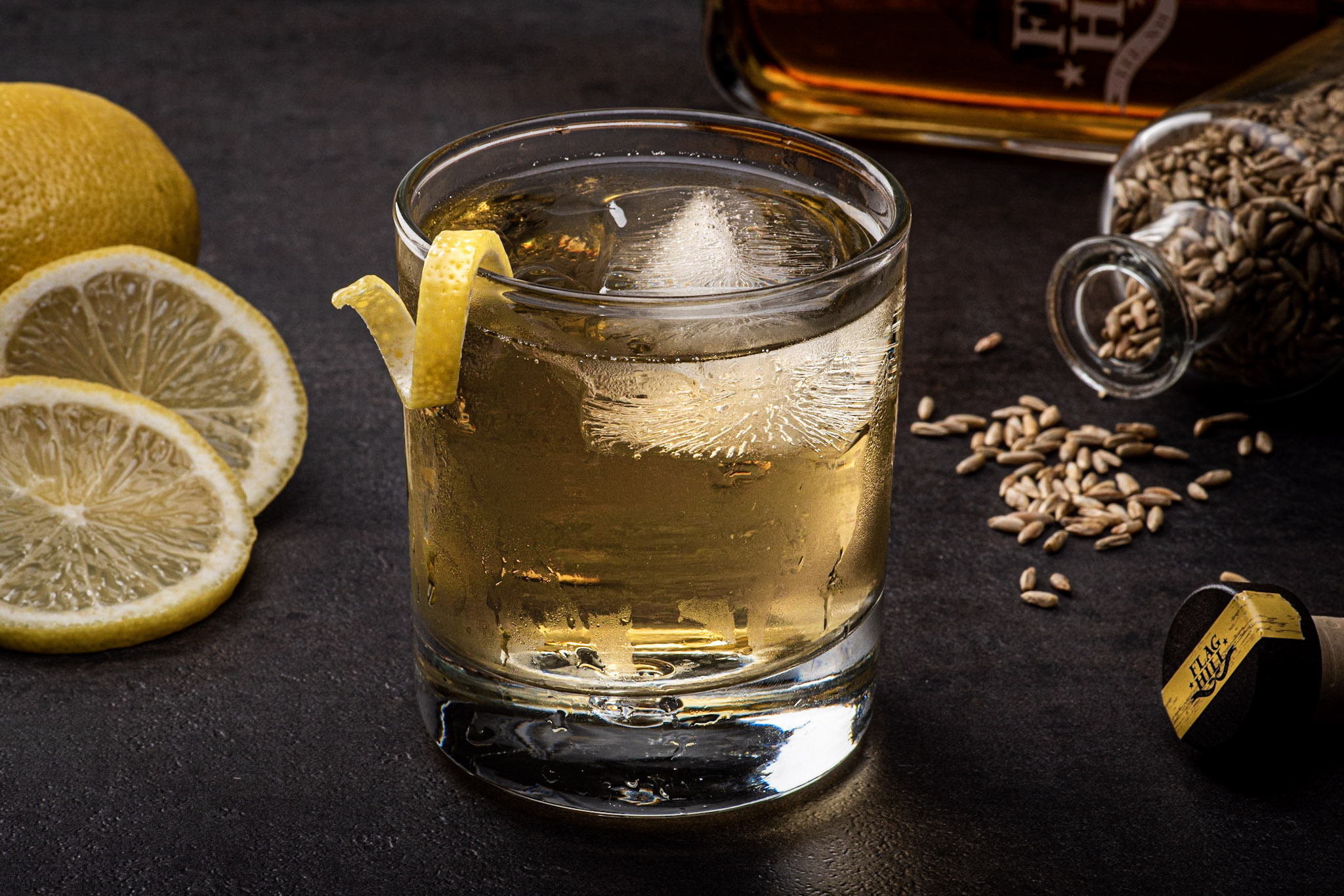 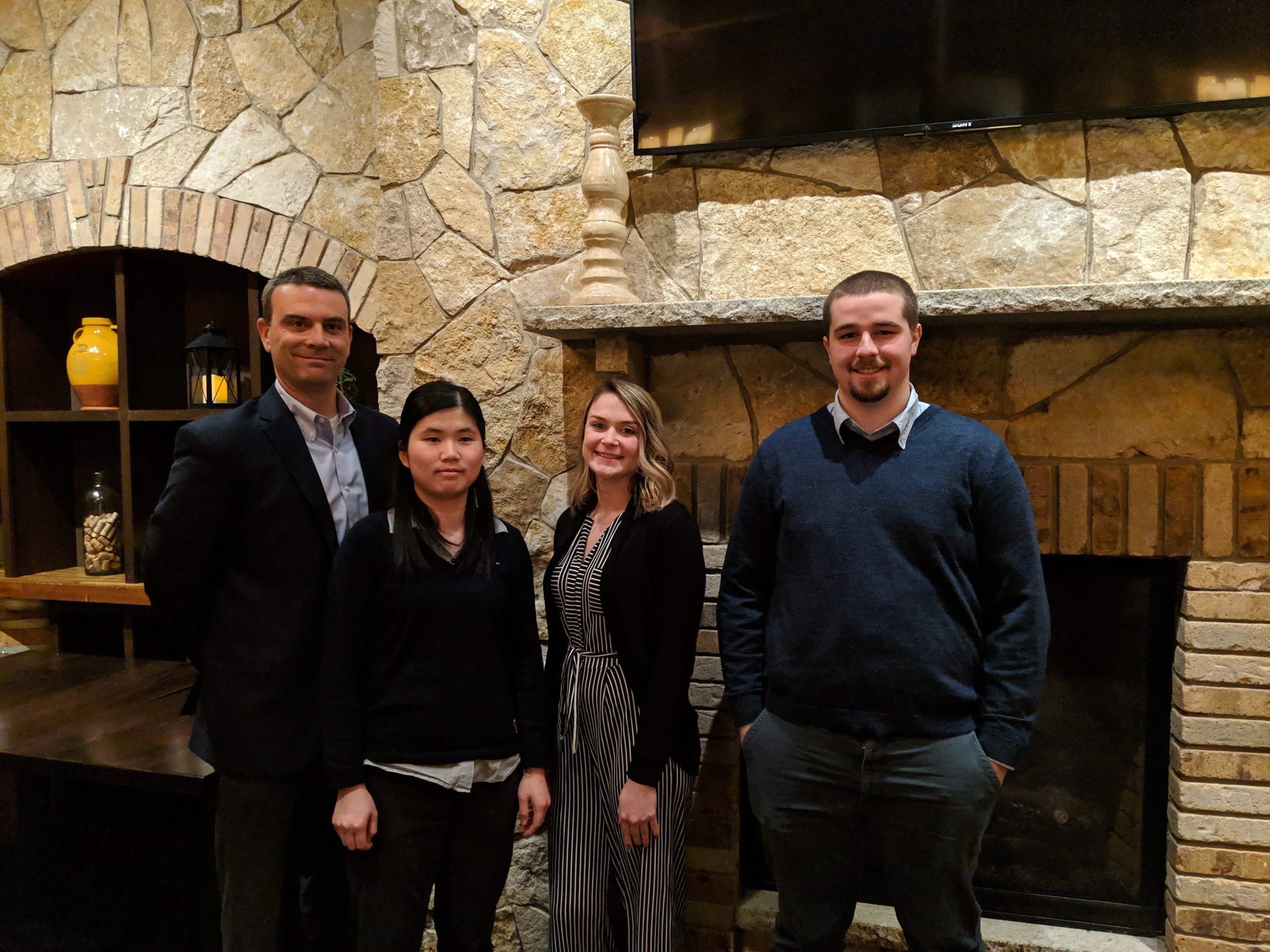