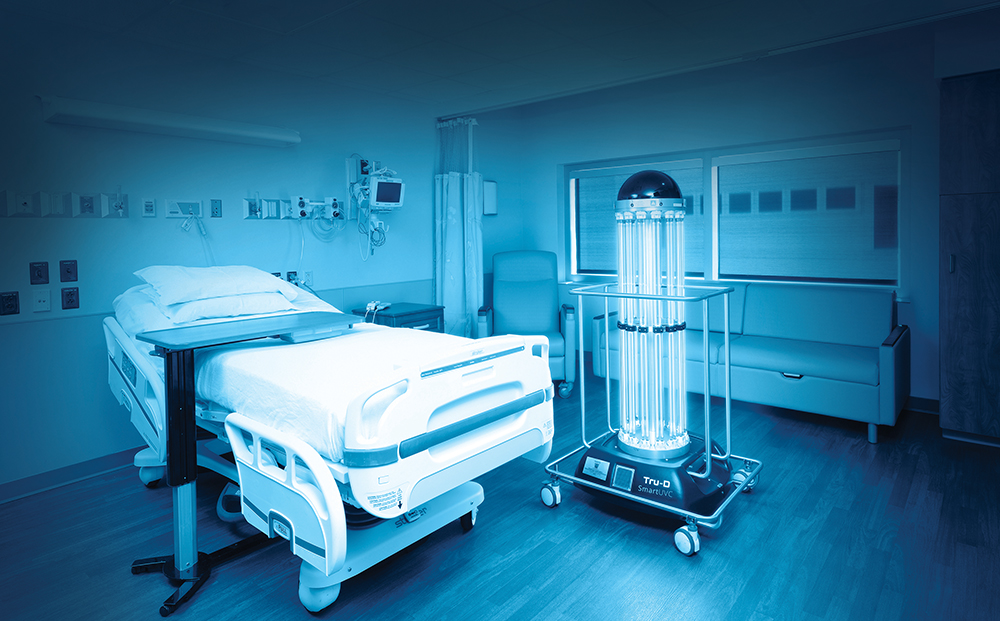 Patients facing everything from shoulder replacements to irregular heartbeats to long-haul COVID symptoms now have new options, thanks to treatment and research innovations at NH hospitals.

Just in the past few years, there have been advances in science, technology and treatment that are intended to improve health outcomes and provide timely updates to family members whose loved ones are receiving care.

Among them is a minimally invasive treatment for those with serious heart valve conditions who are too frail for traditional open-heart surgery. New technology can predict which pancreatic cancer patients will benefit from chemotherapy and which need alternatives. A new germ-eliminating robot cleans patients’ rooms and telemedicine services allows specialists to assist local bedside teams in providing neonatal care to infants hundreds of miles away.

Beyond devices and treatments, some practitioners say they’re also seeing a new collaborative spirit among specialists who previously worked in isolation—a multidisciplinary approach they say can only result in better patient care.

“Everything is moving forward at a much faster rate and is more streamlined,” says Concord Hospital vascular surgeon Dr. Marc A. Camacho of the pace of medical advancement. He credits medical companies’ willingness to put “effort and money” into new products, and more efficiency on the part of the U.S. Food and Drug Administration, for the impetus “to push through paperwork and red tape to allow us to bring the latest and greatest technology.”

Says Dr. Jamie Kim, an electrophysiologist at Catholic Medical Center in Manchester, “The integration between medicine and technology is increasingly intertwined, so as technology advances at a more rapid rate, so do the potential therapies that involve technology.”

Medical firms are also benefitting from introducing products at smaller hospitals, like many in NH, rather than large urban institutions, according to Dr. David Caparrelli, a cardiac surgeon at Catholic Medical Center. “We’re being pushed higher up the list in terms of getting the newer technologies coming here as opposed to going to Mass General or the Cleveland Center or Johns Hopkins,” he says. “Involving smaller institutions with different experts in different regions and facility types provides better data for the industry so they can really get a sense of how their device will work in the real world.”

Here are just some of the developments at NH’s hospitals:

COVID-19
Dartmouth-Hitchcock Medical Center in Lebanon has launched a new program for treating patients with long-haul COVID symptoms, which range from shortness of breath to body aches to brain fog long after the initial infection has subsided. A team of 10 physicians specializing in the various health problems seen in long-haul COVID are coordinating care for COVID patients with symptoms lasting 12 weeks or more.

Dartmouth-Hitchcock was also part of a trial involving a new drug, Lenzilumab, that treats severe COVID cases. The drug prevents a life-threatening immune hyper-response and, taken with other treatments like steroids and/or Remdesivir, has proven highly effective in preventing COVID patients from needing a ventilator.

Children’s Hospital at Dartmouth-Hitchcock started using remote-controlled robots that can enter patients’ rooms on their own and delivering iPads for telehealth and communication purposes. The move is meant to limit exposure to the virus for both patients and staff, while still allowing patients, family members and medical staff to communicate.

The NH Citizens Health Initiative at the University of NH Institute for Health Policy and Practice, joined by the international JSI Research and Training Institute and Dartmouth-Hitchcock’s Project ECHO (Extension for Community Healthcare Outcomes) has participated in training to support nursing home staff during the pandemic to prevent spread of the virus.

The Pulsed Field Ablation (PFA), currently being evaluated in a trial, can be used for patients with treatment-resistant atrial fibrillation (an irregular and often rapid heart rate). An ablation is a non-surgical procedure in which a thin, flexible catheter is inserted into a blood vessel and fed into the heart, where extreme hot or cold temperatures typically are used to target the heart tissue causing haywire beats. With the PFA, the physician can selectively ablate heart tissue without affecting other nearby structures. The procedure can be done “much more efficiently than the current technology,” says Kim.

A new two-step Convergent procedure can treat patients with persistent atrial fibrillation, with the result that most will no longer need medication to control their condition. Caparrelli says an advantage of the process is that it directs energy away from other nearby structures, like the esophagus, that could otherwise be damaged.

CMC doctors were also the first in the state to implant a WATCHMAN device, which is placed in the heart through a catheter to reduce the risk of stroke in patients with non-valvular atrial fibrillation. CMC was part of the trial that led to FDA approval of the device. They are now participating in a trial of the WATCHMAN FLX, which Kim calls, “a new and improved WATCHMAN device,” comparing it to standard medical therapy to see if it’s feasible to use in an expanded patient population. 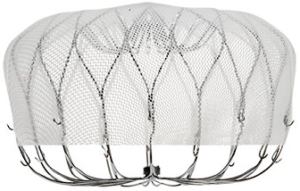 The WATCHMAN-FLX was first implanted into a patient by Catholic Medical Center doctors. Courtesy of Boston Scientific.

A new technology called the Shockwave Coronary IVL System is now in use at CMC to help treat coronary artery disease. It works via a catheter, using sonic pressure that breaks up calcium deposits in the artery. 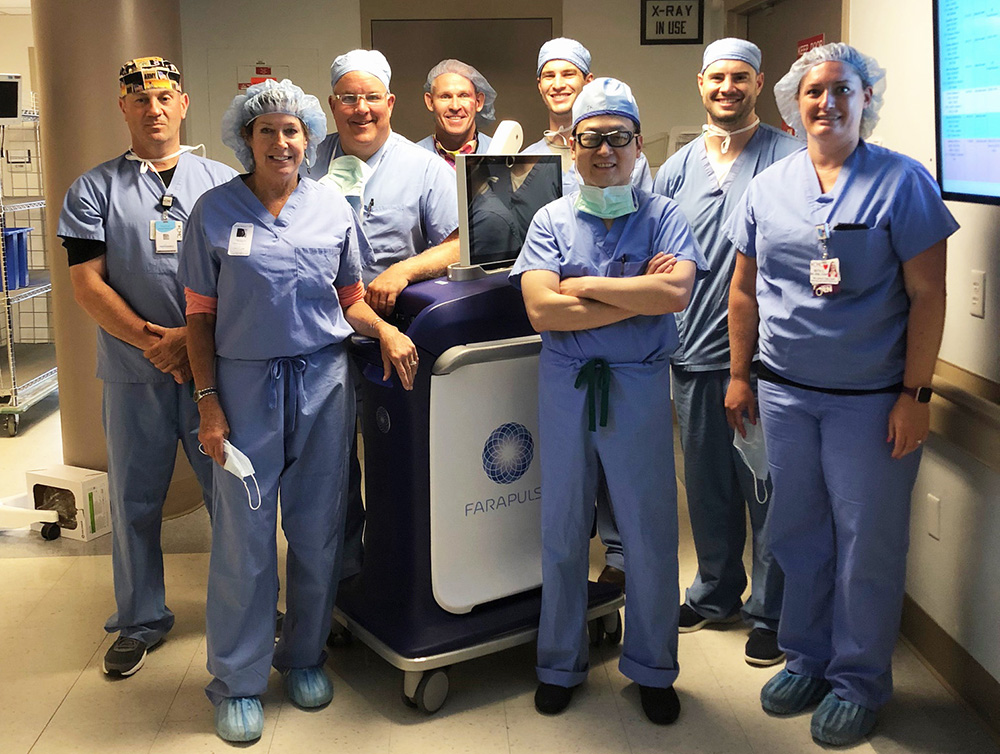 Caparrelli, earlier this year, became the first surgeon in the state to implant a next-generation cardiac device in a 57-year-old patient. Called the Impella 5.5, the new high-flow device helps blood flow while the heart heals and reduces the need for medications that can cause damage to other organs. “It does the work of the left ventricle for it and allows other organs to get adequate blood flow while allowing the heart to rest and recover from surgery,” he says.

CMC has also started offering the MAZE procedure, an ablation to treat atrial fibrillation that is performed when a patient has open-heart surgery for another condition and which has been shown to be more than 90% effective in restoring normal heart rate.

Camacho says the hospital has always offered vascular surgery but “there has been a new push to have premier vascular surgery abilities at Concord Hospital.” The number of board-certified surgeons has been expanded, and “we just created a brand-new endovascular suite where we are able to perform high-level endovascular procedures,” that are less invasive and used to treat problems affecting the blood vessels. Interventional radiologists can now do biopsies remotely, and state-of-the-art venous stenting is offered for patients with such issues as deep vein thrombosis or blood clots, among other available procedures.

The new practice also offers treatments like the MitraClip, in which doctors thread a tiny clip into the heart to repair a malfunctioning mitral valve and restore blood flow; and the Micra Transcatheter Pacing System, a device that is threaded through a vein into the heart rather than under the skin near the collarbone, as with a traditional pacemaker.

Cancer Treatment
Researchers at Dartmouth’s and Dartmouth-Hitchcock’s Norris Cotton Cancer Center have developed a new approach to fighting one of the deadliest forms of cancer: pancreatic ductal adenocarcinoma—one that will allow a tailored approach to dealing with the disease. They have been working on an “epigenetic biomarker” that will help predict which patients are best suited for chemotherapy and which would benefit from a different regimen. 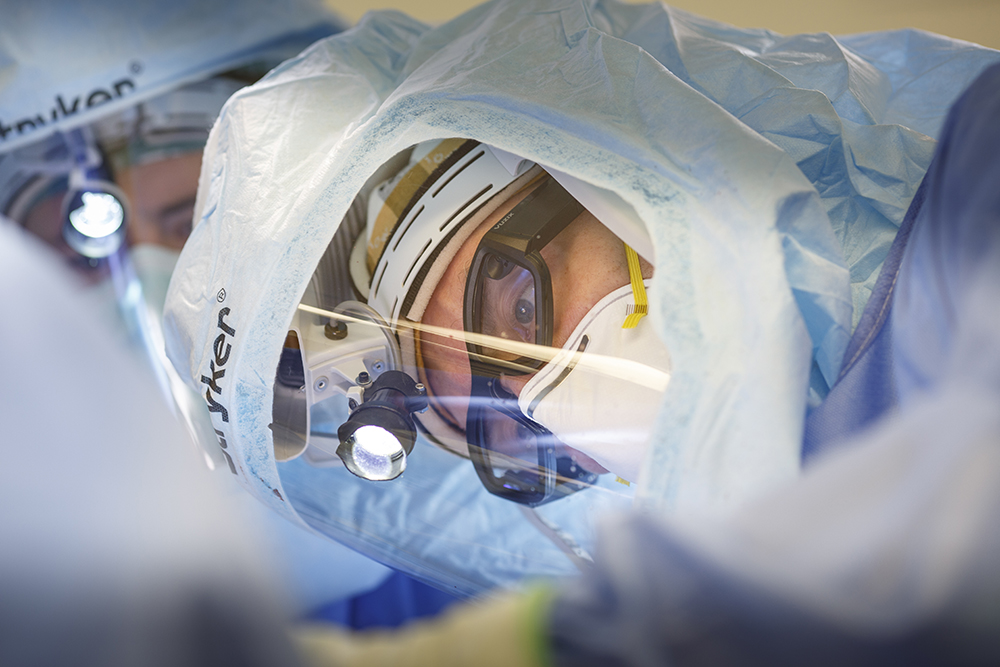 Also at the Norris Cotton Cancer Center, immunology researchers have studied the cowpea mosaic virus, a plant virus that does not infect mammals, and how it stimulates the immune system to attack tumors. The work has paved the way for a potential new biological drug to fight cancer, with early-phase trials in humans planned for late this year or early 2022.

An orthopedic surgeon at Dartmouth-Hitchcock, Dr. John-Erik Bell, recently helped pioneer new technology for shoulder replacements that offers more accuracy and longevity. Called the NextAR Shoulder, the technology uses augmented reality glasses to help guide the surgeon during an operation by showing the precise three-dimensional position of each component of the replacement in real time.

Meanwhile, the Center of Excellence for Robotic Surgery at Portsmouth Regional Hospital has grown its fleet of surgical robots, allowing surgeons to use small incisions to perform complicated procedures using a 3D camera and computer technology. The surgery can be used for knee and hip replacements but also for colorectal, general, gynecologic and
urologic surgeries.

Disinfection
Robots are put to an additional use at Catholic Medical Center, where a second germ-eliminating UVC disinfection robot has been acquired to protect patients from hospital-acquired infections like methicillin-resistant staphylococcus aureus (MRSA) and clostridioides difficile (C. diff). The Tru-D devices, operated by remote control, use ultraviolet C light energy that changes the structure of infectious cells. Once staff has finished cleaning a room, the robot is rolled in and its sensors calculate size, shape and other factors to determine the amount of UVC energy needed to clean the area.

Telemedicine
The pandemic accelerated the use of telemedicine, allowing doctors to treat patients remotely. North Country Healthcare (NCH), an affiliation of four medical facilities in the White Mountain area, is partnering with Dartmouth-Hitchcock Connected Care and Children’s Hospital of Dartmouth-Hitchcock to provide neonatal services using telemedicine.

The partnership allows Dartmouth-Hitchcock neonatologists to virtually assist local medical teams in providing care to infants miles away. That can reduce transfers for hospitals with labor and delivery units and help hospitals that do not have such units with urgent cases. NCH includes Androscoggin Hospital in Berlin, North Country Home Health & Hospice Agency in Littleton, Weeks Medical Center in Lancaster and Upper Connecticut Valley Hospital in Colebrook.

Substance Abuse/Mental Health
A program at Elliot Hospital in Manchester adopted a multidisciplinary approach to treat patients who suffer from both substance abuse and mental health issues through “partial hospitalization,” an intensive, four-week, 20-hours-a-week program to address those issues as well as the social factors contributing to them. The program has a high success rate and has been especially helpful to those who cannot afford to miss work for a traditional 30-day residential treatment.

A team of researchers at Dartmouth-Hitchcock, headed by Section Chief of General Surgery Dr. Richard J. Barth, has developed tailored prescribing guidelines for major surgery patients resulting in high levels of satisfaction of pain management post-surgery, despite patients being given fewer prescription opioids to take home. The guidelines were based on the number of opioids patients took the day before discharge rather than a standard prescription that could provide more medication than necessary. A drop-off box for unused drugs was also installed in the hospital pharmacy to help patients dispose of pills safely.

Medication Delivery
Concord Hospital began using a new software system to ensure accuracy in the hundreds of intravenous (IV) medications prepared daily in its pharmacy so “the patient is getting exactly what was ordered, every time,” says Pharmacy Director Regina Martin.

Where, in the past, a technician would prepare a medication and a pharmacist would review it, the BD IV Prep system uses an automated process involving a sensitive scale and a high-resolution camera to ensure accuracy.

“It’s a lot more work for the pharmacist,” Martin says, requiring 15-20% more time, “But the patient definitely is number one in the process.”

Family Communication
Parkland Medical Center in Derry and Portsmouth Regional Hospital offer enhanced texting platforms to give updates to family members whose loved ones are having surgery. HCA Healthcare, which owns both facilities, developed the InfORmer texting service to keep families up to date using their mobile devices. 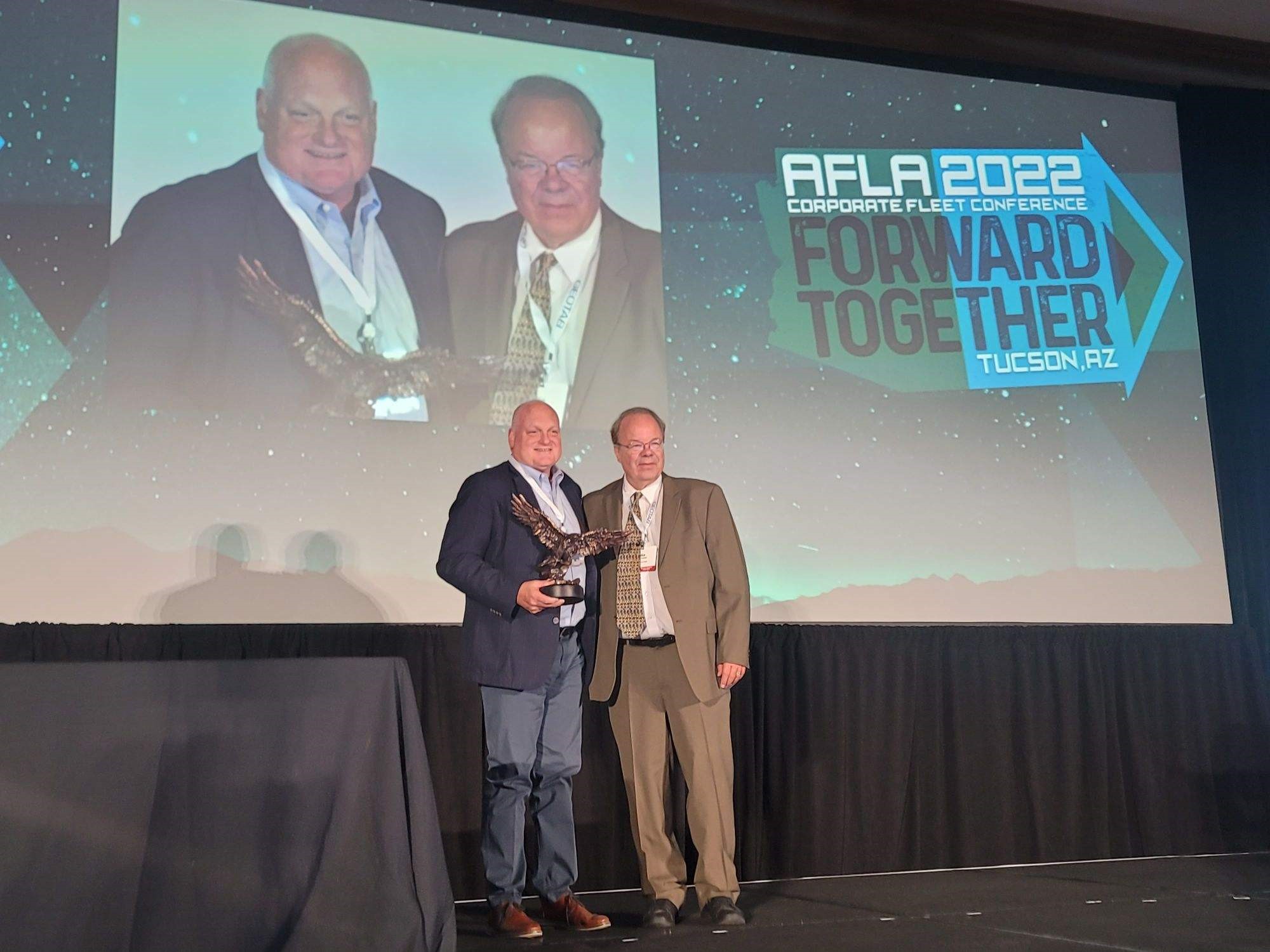 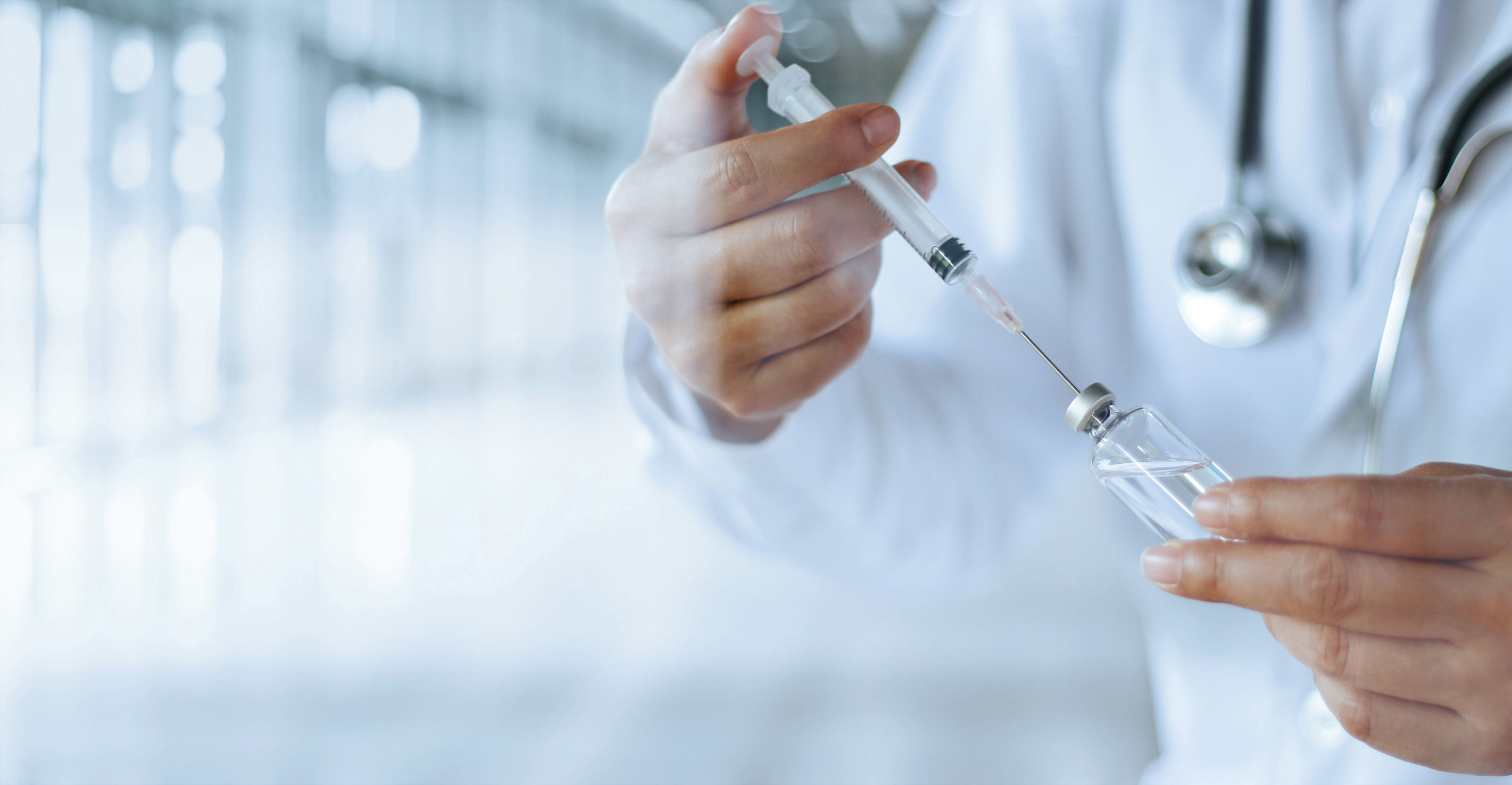