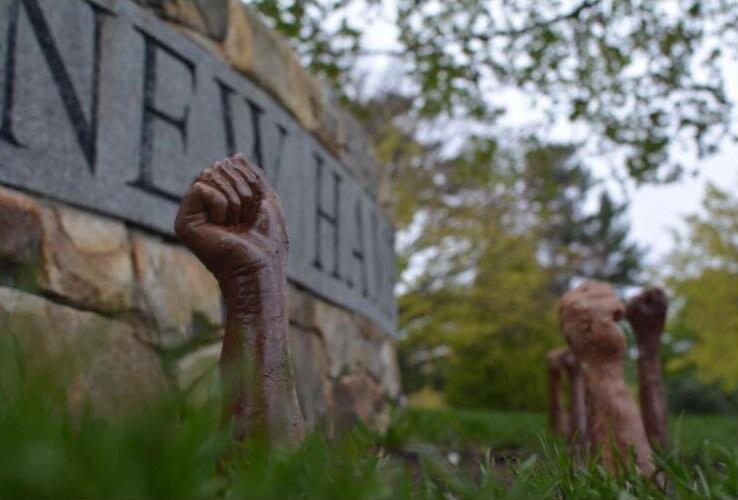 Editor’s Note: This series was co-produced by a cohort of five college students from across New Hampshire as part of a mentorship project created by The Granite State News Collaborative and its partner the NH Press Association. Additional reporting and editing was provided by John M. Bassett, Rick Green, Phil Kincade and Melanie Plenda.

For at least two decades, nationally and in New Hampshire, there has been a push to diversify college campuses. Schools have created diversity offices, put resources into recruitment, implemented policies and been vocal about their desire to make higher education a more inclusive place.

While there has been some progress on this front in New Hampshire, a review of enrollment data from the five largest, four-year, undergraduate schools—Dartmouth College,Keene State College, Plymouth State University, Southern New Hampshire University and University of New Hampshire — shows some have struggled to move their numbers beyond where they were nearly 20 years before.

For example, white enrollment at University System of New Hampshire colleges dipped from about 90 percent in 2000 to 82 percent in 2019. This compares to national white college enrollment that dropped from 71 percent to 55 percent during the same time.

The challenge is especially true for increasing Black student enrollment, which rose from about 1 percent in 2000 to just 1.9 percent in 2019 at these schools. During the same period, the statewide average of Black students increased from 1.3% to 3.11% at  NH degree-granting schools participating in federal aid programs.

The average Hispanic student enrollment at USNH schools generally followed the statewide trend, increasing from less than 1% in 2000 to 3.8% in 2019. The state average for Hispanic enrollment increased from 1.5% to 4.9% during the same period.

According to administrators, this limited success, reflects a wide range of persistent issues that dissuade non-white students from coming to or even staying in New Hampshire.

One difficulty in recruiting students of color is an overall state population that is predominantly white. Universities are asking students to leave more multicultural environments to live in communities unaccustomed to interacting with ethnically diverse people.

“My street was all minorities, Hispanics, Blacks,” said Javaughn Taylor, who grew up in the greater Boston area and will be a senior at New England College in the fall.

“New Hampshire is strictly white,” he said. “We’d get looks or side looks in the community, or in the store.”

“When families of color visit campus, they do not readily see themselves represented across campus,” said Nadine Petty, chief diversity officer and associate vice president at UNH. “It’s hard to convince potential future students that UNH is for them if they don’t see anyone that shares their identity while they are here.”

“We are in a place in which a lot of students don’t necessarily feel comfortable right?” said Marlin Collingwood, Vice President for Communications, Enrollment, and Student Life at Plymouth State College. “We’re in the White Mountains of New Hampshire, it’s a very different place both geographically and also, it is not a very diverse place in and of itself.”

Another issue is tuition cost.

Students can often pay the same or less to attend schools in more ethnically diverse areas of the country where they feel more comfortable.

Case in point is Jaylin Tully, a Gilford High School graduate who is Black and plans on attending a four-year university in Florida after graduating from Lakes Region Community College in December.

“New Hampshire is 94 percent white and I’m very obviously not,” said Tully, “I’m hoping to get out and meet more diverse people and get different perspectives on life.”

Petty points to another challenge.

“We have more diverse students applying to UNH than actually choosing to come to UNH,”  she said “We have to do better as an institution to be more attractive to these students and to encourage them to actually come to the institution if they are accepted.”

New Hampshire colleges’ quest for increased student diversity is hampered in large part because of the state’s inherent demographics, which limits the pool of in-state students of color.

Of New Hampshire’s five largest institutions of higher learning, Dartmouth College and Southern New Hampshire University have made better progress toward diversity, but their circumstances are much different.

On paper, SNHU appears to be among the more diverse schools. As of 2019, white students appear to make up around 57.8% of its students and Black students make up 15.8%. But a closer look shows this largely can be attributed to its online population rather than its on-campus population.

Jada Hebra, Senior Vice President and Chief Diversity Officer of SNHU’s Office of Diversity and Inclusion (ODI), said SNHU “is a different,” animal when it comes to diversity numbers — and said the balance in diversity likely comes from the online population since it is cheaper and easily accessible to a wide variety of people. Hebra also said she imagines the on-campus diversity numbers would fall in with the other New Hampshire schools — below national averages.

Dartmouth College also appears diverse by the numbers in regards to overall variety in race and ethnicity, outpacing national trends of increasing student diversity. In 2018, Dartmouth’s student population was 48.7% white, compared to national white enrollment of 55.2%.

A spokesperson for Dartmouth College, Diana Lawrence said its numbers appear lower because of how the National Center for Education Statistics (NCES), which is a part of the U.S. Department of Education, classifies students. For example, students that might identify as Black but are also of mixed race would be considered in the data under the “two or more races'' category, and not under Black/African American. Dartmouth students that are multi racial have hovered around 5% of its student population since 2013.

But classification quirks go both ways for how Dartmouth counts its students and how the NCES collects their data, which means that Black students are still underrepresented on the Hanover campus when compared to national data. Dartmouth did not respond to repeated attempts for further comment.

So the question remains, after two decades of trying, what must New Hampshire’s largest colleges do to expand student diversity?

Colleges and universities in general need to play a more active role in promoting diversity and inclusion on their campuses, said Dr. Carlos E. Cortés, an independent diversity lecturer and consultant.

“One of the ways [to be more attractive] is by demonstrating and marketing the kinds of things you do to support healthy diversity on your campus,” said Cortés. “Many campuses spout cliches very easily . . .  they’re not very precise about the ways they [promote diversity].”

In his consultations, Cortés tells colleges and universities to find their “unique ways of supporting diversity” and to market them because as Cortés puts it, “people get tired of cliches.”

UNH is trying to reach out more to underrepresented students, said Petty. “[W]e need to get the word out to underrepresented students that if they come here, they have opportunities for engagement at various levels.” Petty continued. “I think they already know we are not perfect, but so much of the great things at UNH surrounding diversity and inclusion efforts remain hidden.”

The Black Lives Matter movement also pushed Plymouth State to commit to creating an office of diversity and inclusion. Originally, the school believed racial and equity issues were already being addressed by existing groups and offices, such as race-based affinity groups.

“But this really made sense right now. We’re going to commit to having an office, and an officer of diversity, equity, and social justice,” said Collingwood. “Our hope is that we’re going to find the right person to come and help lead us into the next step.” Since then, a job posting for the position appears to be unavailable now.

But college administration officials still have to show real commitment in fostering an inclusive campus.   Cortés said colleges and universities too often hire a diversity officer and stop doing work themselves.

“‘Oh, we got a Chief Diversity Officer. We don’t have to do anything. They’ll take care of everything.’” Cortés explains. “It’s important for the commitment for all people on campus or at least all of the leaders on campus to not only be supportive of diversity, but be involved in showing their support in very tangible ways.”

One way for schools to do that is to be more specific in the wake of ongoing issues related to race.

“In the face of this horrendous series of anti-Asian acts,” continues Cortés. “Do they take positions in which they elaborate on what they are going to do to be supportive. As opposed to just a general thing of ‘Oh we abhor the violence’ and of course ‘We don’t want discrimination on our campus.”

Kya Roumimper, Coordinator of Multicultural Student Support and Success and Equity Education at Keene State College,  also makes the point that retaining students of color on campus is greater when colleges and universities invest in the students through student-led peer support groups and leadership programs, for example.

“Investment and support ensures people stay and that they persist,” Roumimper said.

She also said that, although this is different in different parts of the country, in New England, it’s in the college age years that students are developing their racial identities. It’s therefore important, she said, to have the people teaching and supporting these students, look like these students.

New Hampshire’s largest post-secondary institutions are diversifying, albeit slowly. According to Alane Shanks, President of Renga Consulting which specializes in developing diversity, equity, and inclusion strategies, there’s been change, and it might take a while for New Hampshire.

“You can’t assume you’re going to have a magic wand and it will change,” she said. “It’s a slow and steady process, and systemic change doesn’t happen overnight.”

Pictured: Artwork representing solidarity was created by students after a series of racial incidents in spring 2017. The art was later vandalized, and a student was charged for criminal mischief as a result. (Courtesy of FACEBOOK - ALL EYES ON UNH) 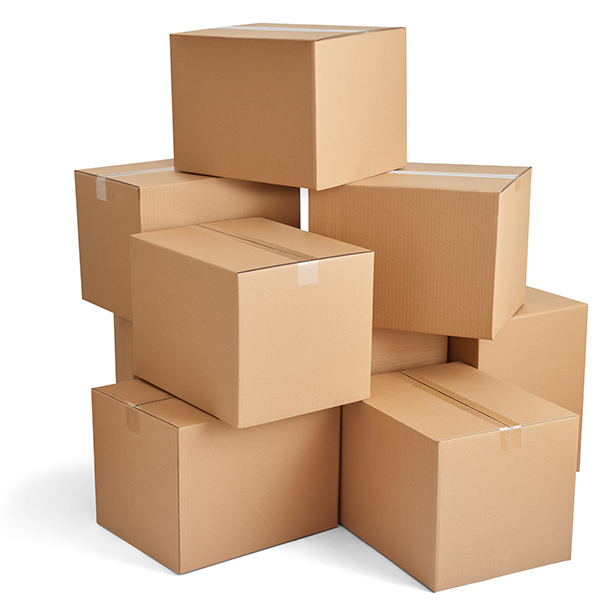 Pandemic Has People Moving to NH 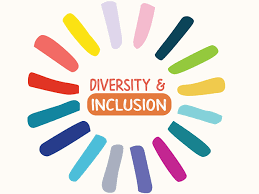 Combating Microaggressions in the Workplace