Do You Smell What I Smell? 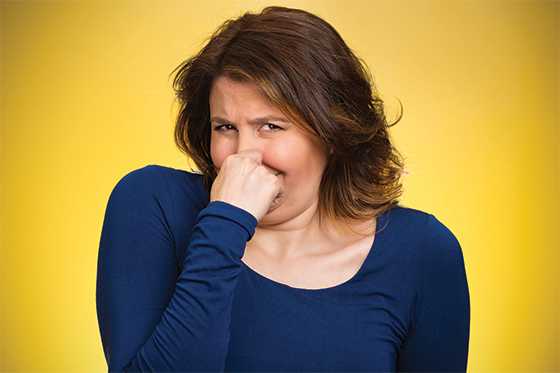 Ever walk onto an elevator and wonder how much perfume the previous occupant bathed in? Does a co-worker’s cologne linger in the hall far longer than he does? How do you delicately explain to Nancy that her favorite scent leaves your eyes watering? Or to Bob that his body spray is actually repelling co-workers instead of attracting dates?

For many, you don’t. You make it HR’s problem.

Okay, so what do you do when there’s nowhere else to pass the buck? Well, it’s a gray area, experts say. Some companies are even exploring policies banning personal scents from the workplace. In 2012, the NH

Legislature considered a bill prohibiting state employees who interact with the public from wearing perfume and other fragrances. (The bill did not pass.)

“OSHA [Occupational Health and Safety Administration] is really struggling with this,” says Michelle Lanier, an HR business partner at Human Resource Partners, an outsourced HR services firm based in Dover. “It is a difficult policy to enforce.”

So what does OSHA have to say on the issue? Well, it depends whether the offending fragrance is triggering a medical issue. According to OSHA, Multiple Chemical Sensitivities (MCS) “is a highly controversial issue. In theory, MCS is an adverse physical reaction to low levels of many common chemicals. Chemical sensitivity is generally accepted as a reaction to chemicals, but debate continues as to whether MCS is classifiable as an illness,” OSHA states on its website.

While there are theories about what causes MCS, ranging from allergies to a dysfunction of the immune system, OSHA states there is “insufficient scientific evidence to confirm a relationship between any of these possible causes and symptoms. Due to the lack of definite information, an evaluation must be performed by a physician knowledgeable of the symptoms of this condition.”

Lanier says while complaints about a co-worker’s perfume or cologne are hardly a new issue for HR professionals, it seems to be more prevalent as people are becoming less tolerant of scents. “It doesn’t seem to be a big deal, but if someone is bothered, it is a big deal [to them]. It affects their whole day,” she says.

When an employee makes a complaint, supervisors must first find out if it’s dislike of the scent or an actual medical condition, Lanier says. Employers need to address such issues quickly if fragrances are aggravating an employee’s medical condition, whether it’s difficulty breathing or a skin reaction, Lanier says, adding they may want to consider a company-wide policy.

However, if the dispute is a matter of taste—or in this case scent—Lanier recommends having a private talk with the person whose choice of fragrance is at issue. “I like to address things individually,” Lanier says.

Be mindful this will be a sensitive topic and you are seeking resolution and not exacerbating the problem by making an employee feel singled out or shamed. Lanier recommends managers select someone that the scent wearer trusts and will feel comfortable talking to, even about such an awkward topic. She recommends approaching the discussion gently, complimenting the perfume or cologne but letting the person know not everyone appreciates the scent and that they need to be sensitive to that.

Lanier cautions against having both the complaining employee and the person whose fragrance is in question confront the issue together as sometimes people are not tactful and can make a situation worse.

If you are unable to convince the employee to stop wearing the offending scent, companies can consider different options to assist the employee who is bothered by it, such as allowing them to telecommute or work in an area away from the person with the offending fragrance, Lanier says. “Look at options and how serious the situation is,” she says.

Other companies merely suggest to the company as a whole to avoid wearing fragrances and post signs reminding employees they work in close quarters with others and to be mindful of scents, Lanier says.

Companies wanting to avoid the situation entirely and treat everyone equally are putting in policies banning employees from wearing perfumes, colognes or body sprays. “Companies struggle with how far to take it,” Lanier says, noting other items also carry scents, such as cleaning products, deodorants, air fresheners and lotions.

The Devil in the Tsunami