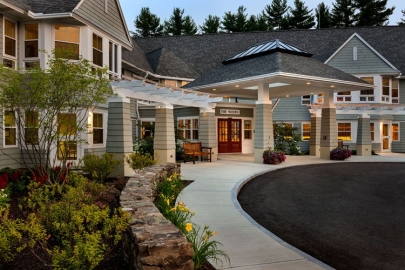 Birch Hill Terrace in Manchester, a nonprofit continuing care retirement community (CCRC), is now affiliated with The RiverWoods Group, a parent company of RiverWoods in Exeter, also a nonprofit CCRC. The affiliation agreement was finalized on March 17, and will be reviewed for approval by both the NH Charitable Trust Unit and NH Insurance Department, both in Concord.

CCRCs offer independent living facilities for people age 62 years or older where they enter as independent residents with higher levels of care available within the same campus as needed.

Birch Hill Terrace currently has 180 residents on its campus, while RiverWoods has 620 residents across three campuses.

Gary Zabrierek, president of Birch Hill Terrace, says that Birch Hill is “facing an unprecedented wave of [Baby Boomers] getting ready for retirement, bringing an increased demand for contemporary enhancements. This affiliation brings resources and fresh ideas that will help position us to serve both our current residents as well as the next generation.”

The affiliation includes an estimated $6 million, two-year capital investment in the Birch Hill Terrace campus to renovate common spaces and apartment design. Architectural renderings of the projects are expected to be released by mid-May.

“Birch Hill and RiverWoods have very similar values and mission … to create community and peace of mind for seniors,” says Justine Vogel, CEO and president of RiverWoods. “As two charitable, nonprofit CCRCs, we can benefit from an affiliation and collaborate to bring this way of life to more people.”

“This affiliation will enable us to transform our campus,” adds Zabierek. “If you think you’ve seen Birch Hill, you owe it to yourself to take a second look.”

We Are Our Presentations