A rendering of Market & Main. Courtesy of TFMoran.

Rolling hills, tree-lined streets, wide conservation lands and preserved barns gloss the architectural character of this southern NH community, second only to Hampton Falls in affluence. Hugging Manchester, the state’s largest city, and the western banks of the Merrimack River, Bedford is a “tale of two communities,” according to Rick Sawyer, who manages this town of just over 22,000 residents.

Bedford’s bifurcation is not an even split, with the largest topographies conserved for recreational spaces or homes with more than an acre of luscious lawns or leafy woods. Less than 5% of Bedford’s 35 square miles remains undeveloped and only a tenth of its lands comprise commercial and industrial sectors, concentrated along South River Road and portions of Route 101.

The scenery hasn’t changed much in the last 10 years, says Sawyer. Any signposts of reinvention require scrolling back at least five decades. “It was a very rural community with a lot of farming,” he says. “And like all of our neighbors, we had the explosion of housing in the 80s and 90s.”

In the 2000s, big-box retailers like Kohl’s, Target, Lowe’s and Staples began to percolate among Bedford’s burgeoning commerce scene. Along with office and medical parks, manufacturing and R&D buildings, these edifices replaced half-century stalwarts like Macy’s, the never-energetic Bedford Mall and the legendary Wayfarer Inn and Convention Center, where U.S. presidential candidates and campaign staffers booked rooms and jostled at the bar during NH’s first-in-the-nation presidential primary seasons.

Macy’s in Bedford was demolished to make room for Market & Main developments. Courtesy of the town of Bedford.

Bedford was the first town in NH in 1994 to leverage performance zoning, which allows local planning boards to waive or loosen zoning regulations for the benefit of the community. “It [performance zoning] made it easier for developers to come and build in that part of town. And that’s where the town wanted to see growth,” in concentrated corridors, distanced from the more residential regions, Sawyer says.

Developer Dick Anagnost, president of The Anagnost Companies in Manchester, lives in Bedford and is responsible for several commercial plazas and residential neighborhoods in town. He says Bedford has an engaged community, albeit one that routinely resists congestion and density. Anagnost spent two years pursuing approvals for a 93-unit complex behind the high school, even though the complex allots about one-third of its units for workforce housing to meet the 25% minimum set by town ordinance.

The Bedford Village Manor at Riddlebrook will welcome occupants in spring 2022, despite a petition with about 1,100 signatures opposing it. “They [the residents] fought us tooth and nail on the 93 units,” he says.

Anagnost developed a similar rental property on Cooper Lane with 144 units, which hasn’t held a vacancy since it opened in 2017. Police officers, firefighters and teachers live in many of the apartments.  “You need these line workers to make Bedford a good place to live because they work in workforce jobs that are required to support the town,” says Anagnost.

Schools Spur Home Sales Surge
Like many residents who decide to plant roots in Bedford, Juliet Abendroth was motivated by the reputation of the public schools. “That was the driving force,” says the 41-year-old from central New York who moved to Bedford in July after her husband landed a job north of Boston shortly before the coronavirus lockdown. “Ironically he’s never been to his office,” she says, “so I don’t even know which [Massachusetts] town it is in.”

Bedford schools are rated fourth in the state by Niche Guide to Schools and hold the coveted top spot for student athletes out of nearly 11,000 public school districts in the country. Niche.com awards the six-school administrative unit high marks in all metrics, except for diversity, where it downgrades the district to a C.

After several six-hour drives, where on a 90-degree day, Abendroth would leave two kids and two dogs idling in an air-conditioned car to tour an open house during a pandemic, she found one that offered more land and interior space for the money than she could expect to find closer to Boston. 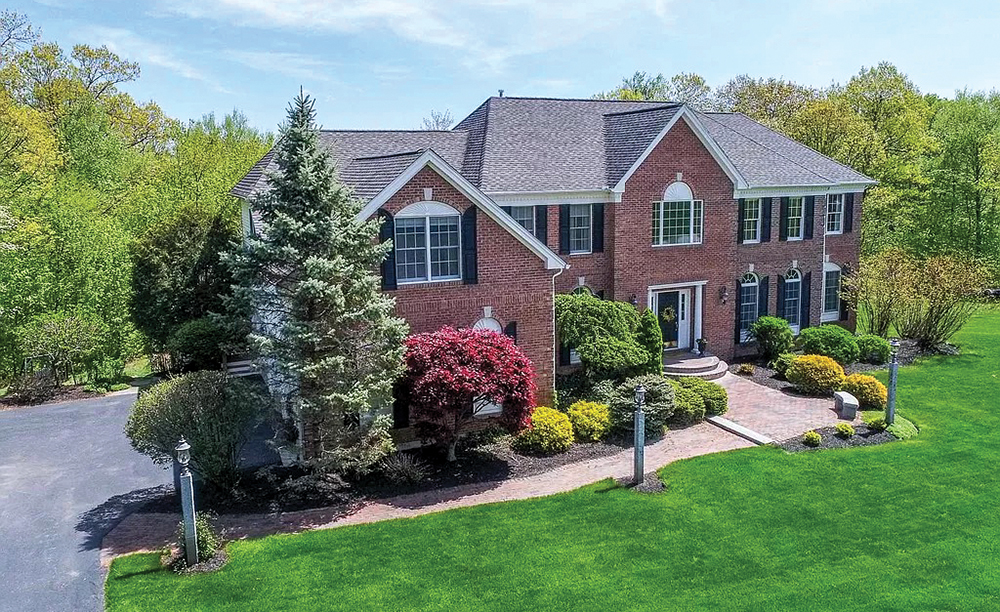 The Bedford home of Juliet and Jay Abendroth. Courtesy photo.

Abendroth’s agent, Filomena Gordon of Coldwell Banker Realty, says despite coronavirus restrictions, realtors are experiencing a brisk business from out-of-state buyers. Gordon says she’s had more buyers from California in the past year than any other in her 15 years of brokering.

Bedford’s home sales continued their momentum through the winter, with sellers receiving multiple offers in less than a week, says Gordon. “COVID has made it so that people want to get out of the city and go to the suburbs, and Bedford is one of those towns well-known for the community, the schools and having a lot for kids to do,” she says.

For new home buyers like Abendroth, hunkering down in new digs while also social distancing has its challenges. For the most part, this Syracuse native finds the vibe familiar. Yet she’s also surprised by what’s missing: “There’s no quaint little village. I kind of pictured a New England town to have a main drag with a fountain and fancy little shops,” she says.

The lack of a downtown has been the subject of many conversations during the last 30 years, says Sawyer. At one point, town planners focused on the Bedford Village shops along NH 101 as a town hub, but that was unsuccessful. “Frankly, you don’t want the downtown to be the four-lane highway,” Sawyer says. “I think it’s something we’re just going to struggle with.”

Potential loomed large for a village buzzing with shops, restaurants, cafes and gyms when the Market and Main project launched in 2015. Located at the intersection of NH 101 and I-293/Everett Turnpike next to an existing Whole Foods, the 200,000-square-foot development from Texas-based Encore Enterprises completed only its first phase, which includes Trader Joe’s and the Friendly Toast restaurant.

The original concept included a hotel and a multiplex theater, says Ted Chryssicas, managing director of the Newmark brokerage firm in Boston, Encore’s leasing agent. COVID-19 put the brakes on the travel industry, he says, and dried up movie theaters’ cash flow due to closings or limited openings. Theaters are also fretting about film studios sending their features directly to streaming platforms, taking the luster off consumers’ need for a night out at the movies.

Wooing tenants and coordinating leasing agreements are like “a puzzle,” he says. “Sometimes you can’t get one portion of the puzzle unless you have the foundation of another.” For example, a sporting goods retailer or fitness facility may occupy the site, but only if the cinema has signed on, too.

With the demand for travel and entertainment in limbo, Chryssicas is recasting Market and Main to include more upscale shops and dining. He remains hopeful that with the rollout of COVID-19 vaccines, a hotel and a movie theater may eventually become a reality for the project. The Bedford location has an advantage because “it’s the best piece of real estate in New Hampshire,” he says, with visibility and accessibility from major highway routes. “It already has traffic patterns in place. Now we’re just trying to service the area with the proper type of retail to really kick this thing off and be a huge success.”

The Restaurant Scene
Pandemic restrictions crushed expectations for many dining establishments, forcing them to adapt against untenable circumstances. Nationally, restaurant and food service industry sales fell by $240 billion in 2020, according to the National Restaurant Association.

Great NH Restaurants CEO Tom Boucher, who owns Copper Door and T-Bones in Bedford as well as other restaurants around the state, says that before the pandemic, take-out and delivery contributed to only 8% of his business; now it is closer to 25%, which doesn’t translate to financial success because most restaurants need in-house diners to thrive. Unfortunately, many tourists and regulars stopped patronizing restaurants to safeguard against the coronavirus. Boucher says his restaurants comply with all CDC guidelines and bring fresh air into the buildings every 10 to 12 minutes, which he says is more than most people’s offices or homes can accomplish.

Despite a year that Boucher calls the “worst of his life,” he’s bullish about summer. The rate of COVID-19 cases and hospitalizations, until recently, had been trending downward in NH and that may fuel “a second round of the Roaring 20s,” he says. After the devastation of the Spanish flu, “people were just itching to get out and have fun and spend money.”

A testament to such optimism is the launch of several new gathering spots in Bedford, almost all of which are housed in rehabs of defunct diners. Tucker’s, a NH breakfast-lunch chain, plans to open its sixth and largest location in Bedford’s former Outback Steakhouse. 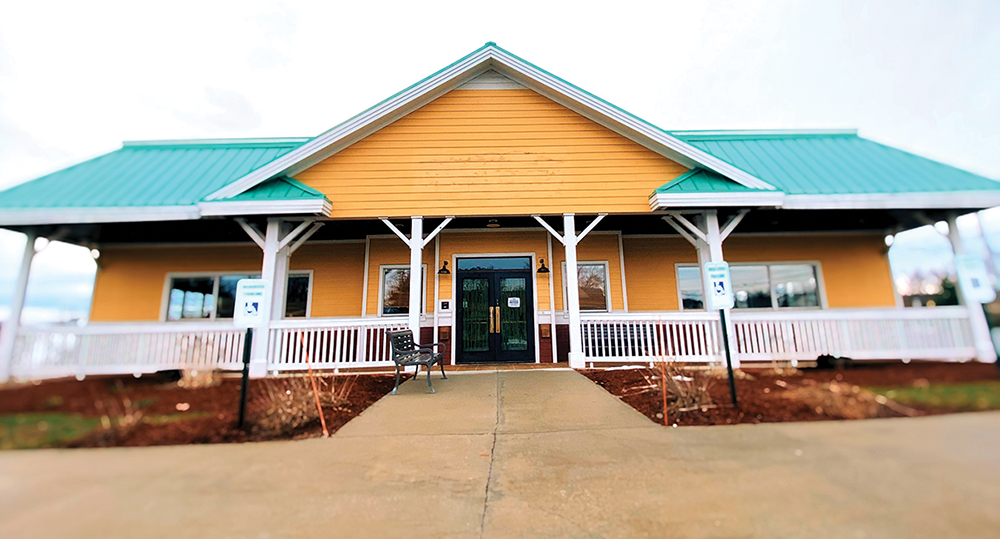 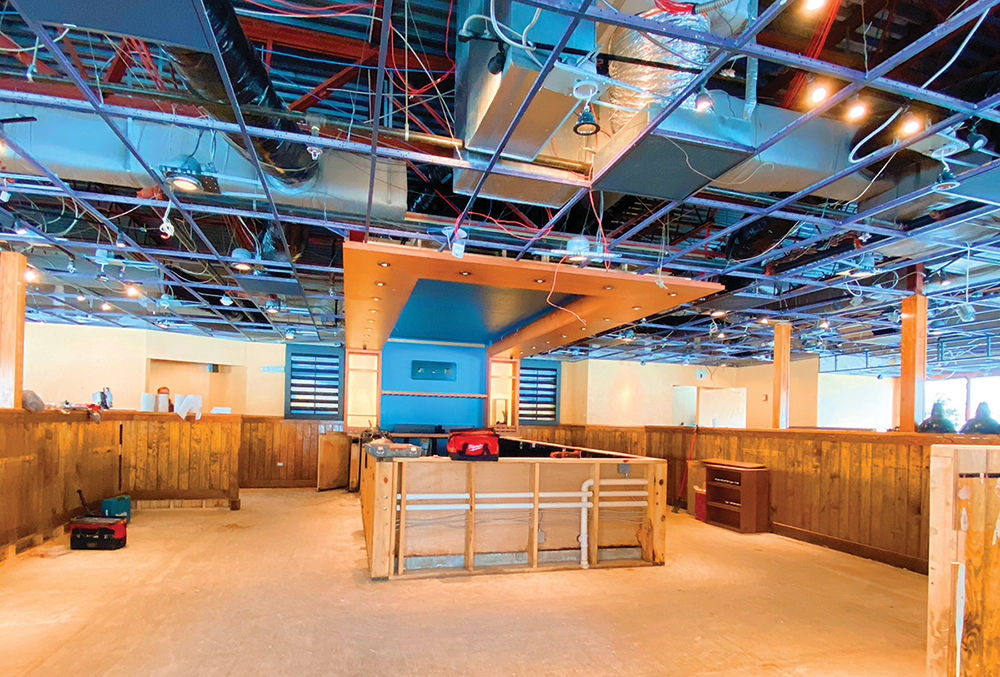 The Middle Eastern-influenced Pressed Cafe, with locations in NH and Massachusetts, is opening a double drive-through with fast casual seating and a bar. Owner Miri Shpindler says her company had been eyeing Bedford since 2017. When the site of the former Canoe Restaurant became available, “we jumped on it right away.” She expects construction to be complete by the fall. Backyard Brewery is planning a 10,000-square-foot microbrewery, including a bar, tasting room and outside patio on property that houses the Country Inn and Suites by Radisson.

Boucher is moving forward with his third Bedford restaurant and latest concept, a family-oriented kitchen and sports bar with a made-from-scratch menu, scheduled for completion by the summer of 2021 and situated in the former Shorty’s Mexican Restaurant. “It’s going to be the best place in Bedford to go watch sporting events.” 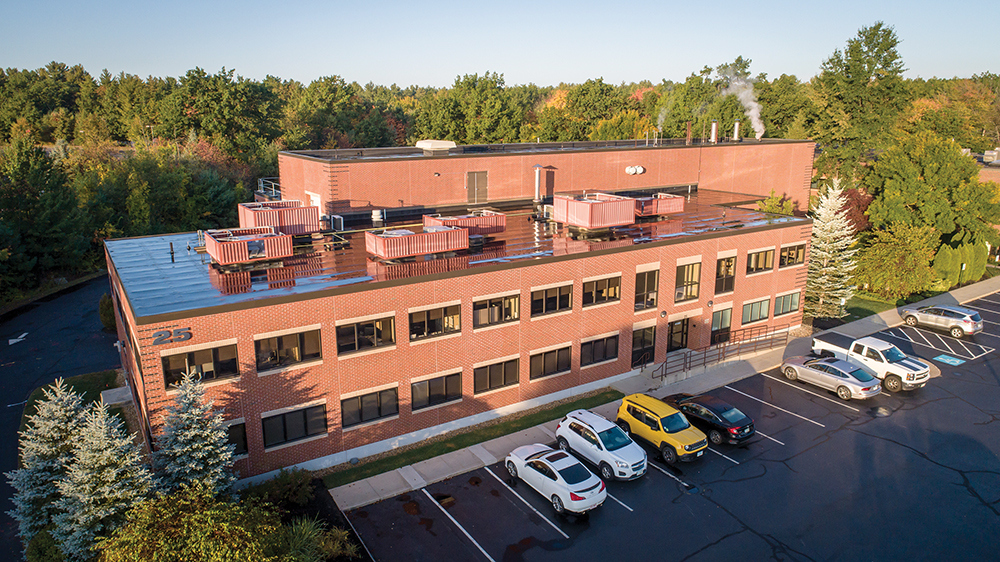 Safran Optics-1 expanded production and engineering last year with a two-story, 15,000-square-foot addition. LSNE increased its vial filling and lyophilization capacity this year with a new automated aseptic fill line to meet the demand in drug product manufacturing driven by the COVID-19 pandemic. It is the largest employer in town, followed by the Bedford
School District. 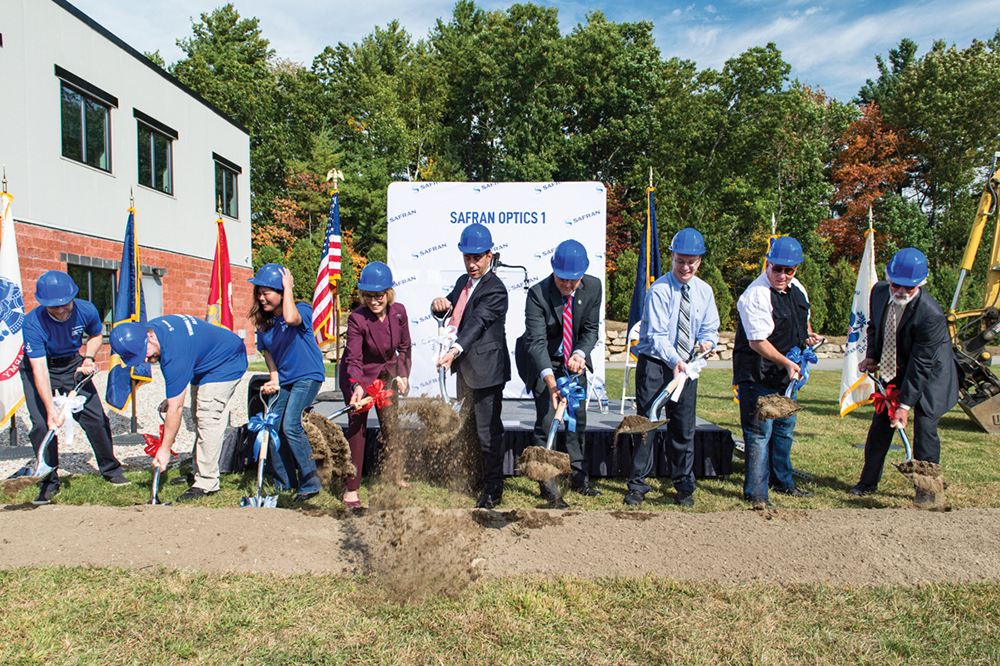 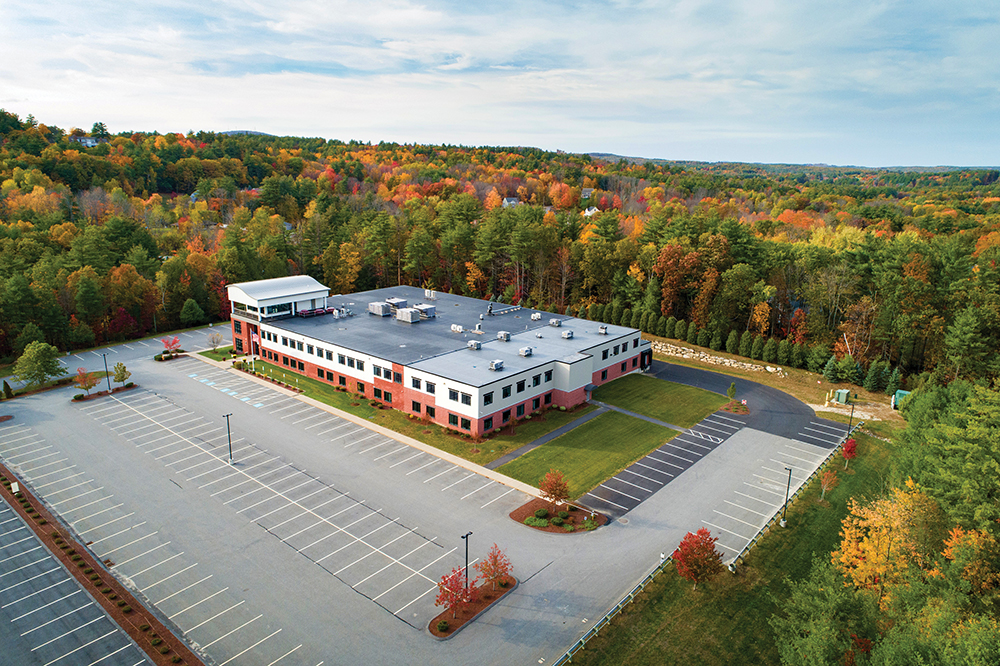 Top: The groundbreaking ceremony for the Optics-1 building expansion. Bottom: The expanded building, indicated by a change in roof and brick color on the right. Courtesy photos.

Wire Belt Company of America, based in Londonderry since 1890, is outgrowing its current facility and is reportedly looking to relocate to either Manchester or a 100,000-square-foot facility at 308 S. River Road in Bedford, which has the potential for a 25,000-square-foot addition.

Unlike many towns in the Granite State, Bedford does not employ a director of economic development. Perched at the intersection of major highways and close to the Manchester-Boston Regional Airport, the mountains and the seacoast, it requires little promotion, says Sawyer.

“Bedford was attractive just because of who we were and where we’re located and what we’ve become,” he says.  Even as businesses close, others are rushing in to fill those spots. “We didn’t need to go out soliciting development.”

As the town moves forward in 2021 and repurposes subdivisions, retail havens and restaurants, it wrestles with the byproducts of growth, namely housing affordability, preservation of agricultural lands and increasing pressure on municipal services.

Historically, says Sawyer, town administrators felt the resources for economic development were better spent elsewhere. “We’ll see if that changes over the next decade or so.” 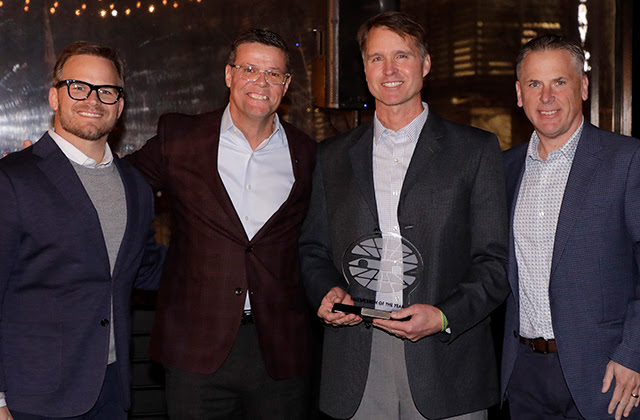 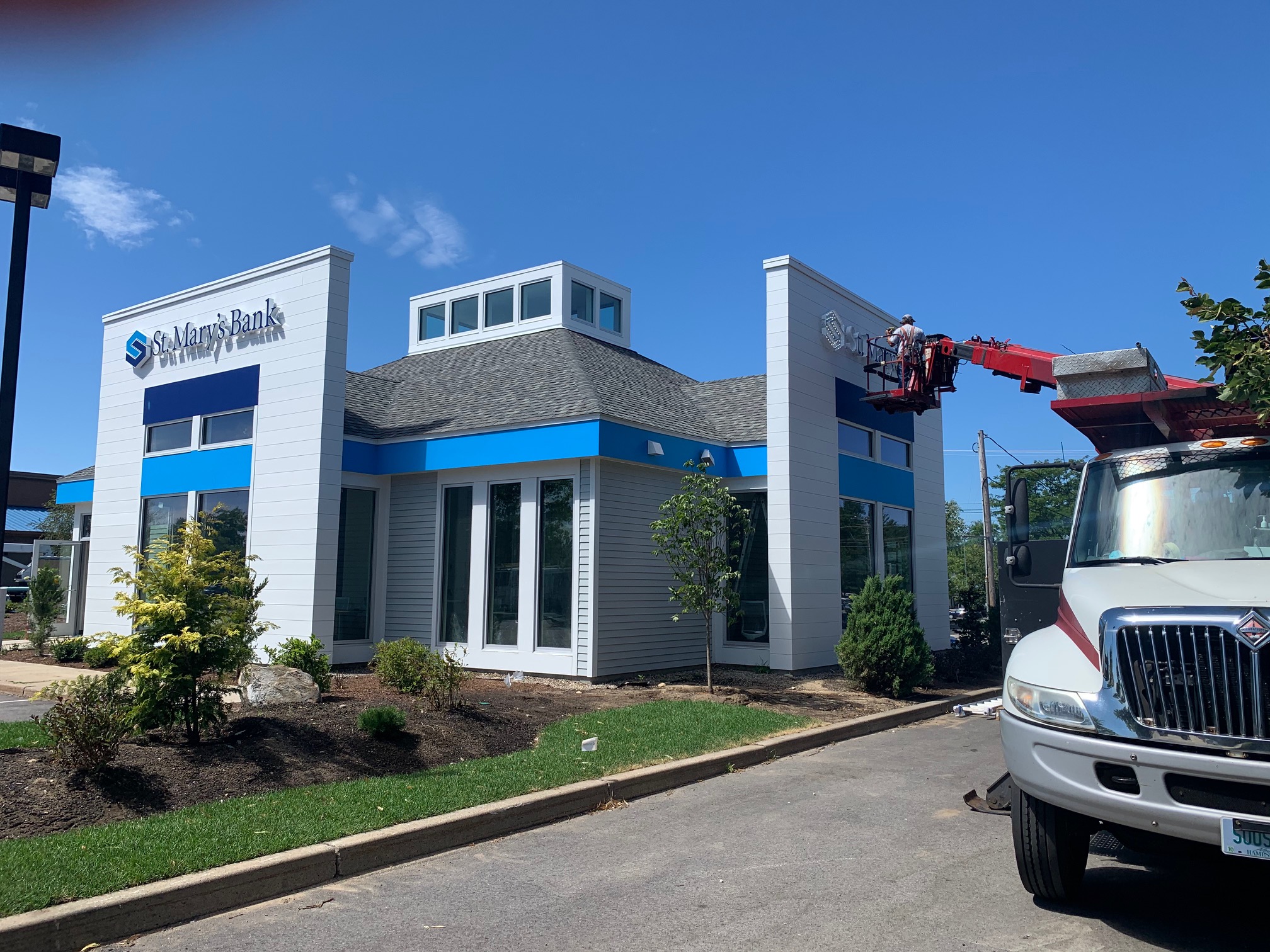