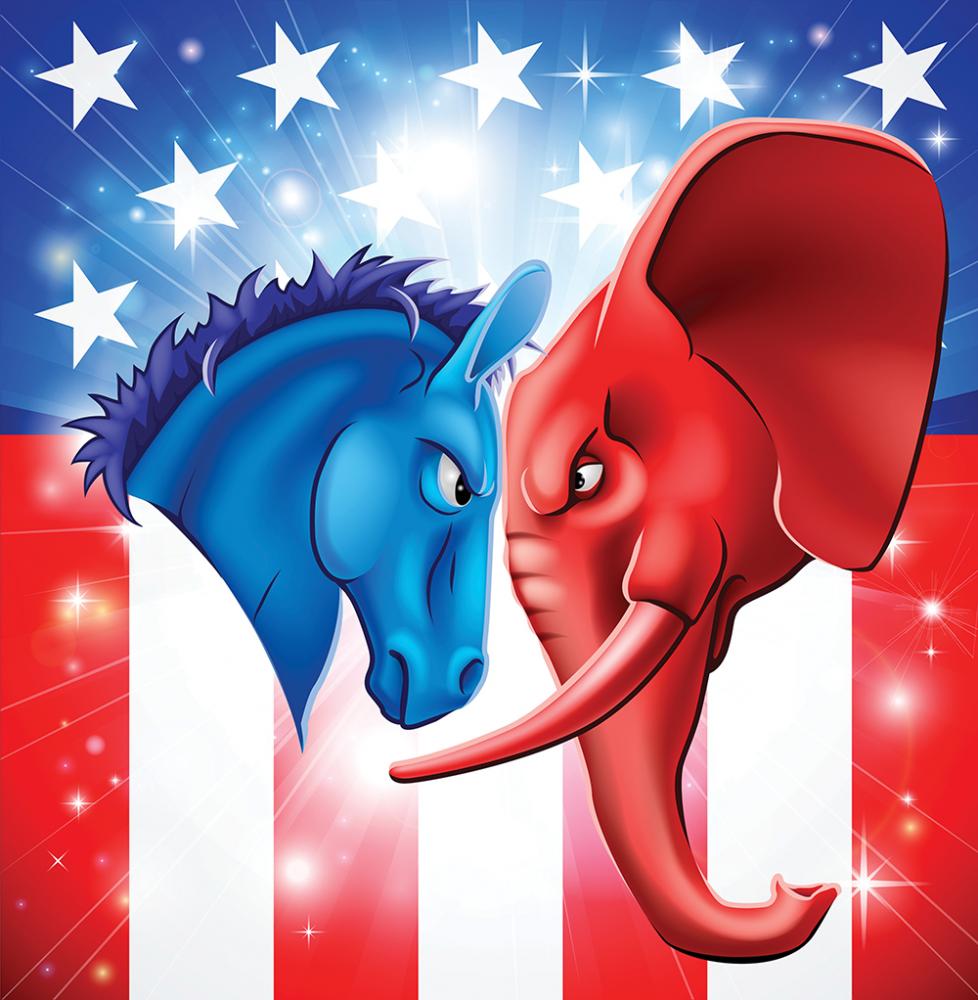 Beginning with George Washington in 1796, elected officials have a tradition of warning voters of a partisan apocalypse. In his farewell address, Washington said political parties would enable “cunning, ambitious, and unprincipled men” to destroy democracy.

Gov. Chris Sununu echoed that sentiment in his 2019 inaugural address when he said NH must “rise above negativity and partisanship.”

(Of course, Democrats don’t see Sununu as a bipartisan leader. After the governor’s 2019 budget address, House Majority Leader Doug Ley said, “For a speech that was billed by him to be above partisanship, it was one of the most highly partisan budget speeches I’ve heard.”)

Since then, the NH Legislature has been embroiled in contentious battles, including a budget standoff and a record number of gubernatorial vetoes, and a number of votes to override vetoes. And data reveals that party divisions are deeper than ever in both the House and Senate.

There are many different ways to measure partisanship and political polarization, but arguably the most well-known is the “party unity” measure from Congressional Quarterly. Party unity is the percentage of votes in each legislative session in which a majority of one party opposes a majority of the other party. This reflects how often legislators draw a sharp line in the sand based on party, with few legislators crossing party lines.

While the divide is less severe in the NH Senate, partisanship is on the rise there as well. From January through April, Senate party unity was 65%, though when recalculated through September, party unity rose to 76%. That suggests votes became more contentious in the Senate this spring. The last time Senate party unity was close to that high was in 2011, at 73%. 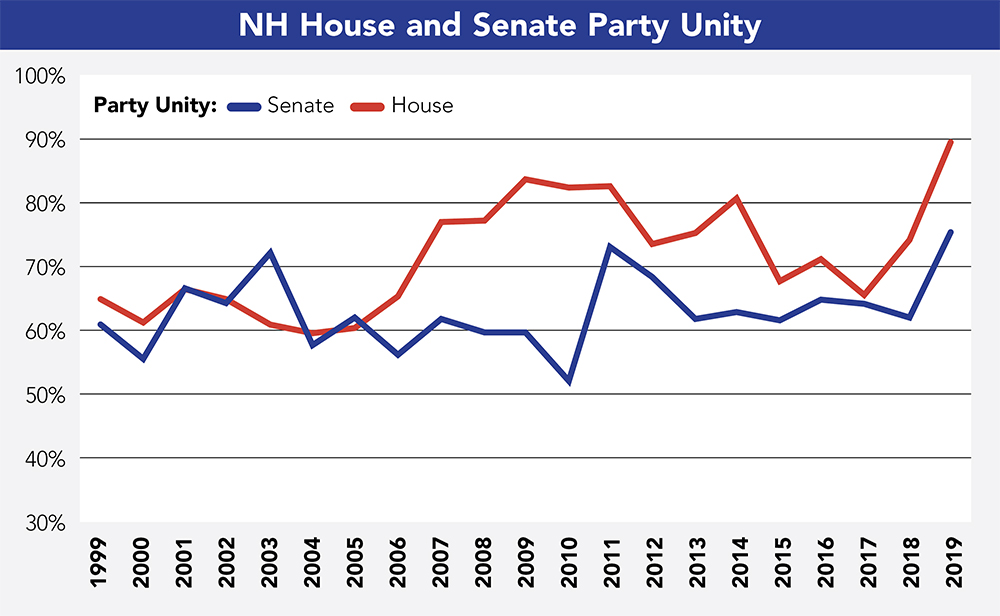 The growing share of bills with roll-call votes suggests that voting is getting more contentious and it echoes results of the party unity measure.

Influencing Factors
There are dozens of factors that likely influence partisanship in the Legislature. Overall the Senate may be less partisan than the House because it is a smaller body, and each senator represents a large number of citizens spanning a broad political spectrum. In the NH House, each representative has a small constituency—just over 3,000—so they don’t have to appeal to as broad a group of voters.

It is also possible the House has a higher party-unity score because representatives often have less political experience than senators and certainly fewer staff to help them process bills. This lack of resources may lead them to rely more heavily on party guidance when deciding how to vote.

It’s also possible that increased partisanship at the national level might trickle down to state legislatures. For example, House and Senate party unity was high in 2011. This immediately followed the start of the national Tea Party movement, including the election of Bill O’Brien as Speaker of the House.

Broader economic trends or when both parties are more evenly represented affects bipartisanship. Party unity was low in the House and Senate in 2000. This was a time of economic prosperity, and there was an even balance of political power in NH’s government. Democrat Jeanne Shaheen served in the governor’s office, Republicans controlled the House and the Senate was split down the middle.

However, that may reflect competitiveness more than party agendas. Whenever Republicans held a majority, it tended to be a large majority—on average, 63% of the seats. When Democrats held a majority, it tended to be smaller—on average, 57% of the seats. Party unity may have been higher during Democratic majorities because there was a narrower gap between Republicans and Democrats. Democrats would have to corral members to pass bills.

Volume of Work
New Hampshire legislators have to attend committee meetings, vote on hundreds of bills and pass a budget several thousand pages long—all within six months. When the volume of that work increases, do legislators rely more on party leaders when deciding to vote? It seems the answer is generally yes, at least in the House.

Prior to the 2013-2014 legislative session, party unity was almost always higher in the first year of the session, in both the House and Senate. However, that trend flipped in 2014. One possible reason: Medicaid expansion, which was first authorized in 2014 after a year of hot debate. That started a tradition of revisiting the program in non-budget years.

In the House there also seems to be a small relationship between the number of bills and party unity, with higher party unity in years with more bills. House sessions with fewer than 1,200 bills had an average party unity of 69% each biennium.

On the other hand, the NH Senate is arguably not much more partisan than the U.S. Senate. With the notable exceptions of 2010 and 2011, the NH Senate and U.S. Senate have often seen similar party unity scores over the past two decades.

Neither has become much more partisan over the past two decades.

Is Partisanship Hurting NH?
Despite George Washington’s warnings, partisanship is not necessarily terrible for democracy. Whenever political parties disagree on an issue, it gives voters a clear choice. There is some evidence that a strong partisan divide increases voter turnout. After all, there was record high turnout for the 2018 midterm elections, when partisanship was high.

Also, the increase in partisanship in the NH House is not inevitable. If voters are suspicious of partisanship, they can elect officials committed to bipartisanship. They can also influence how their legislators vote by attending public hearings, writing letters, calling and encouraging other voters to do the same.

Anna Brown is director of research and analysis with Citizens Count, a nonprofit that provides NH citizens with objective information about issues and candidates. Visit citizenscount.org. 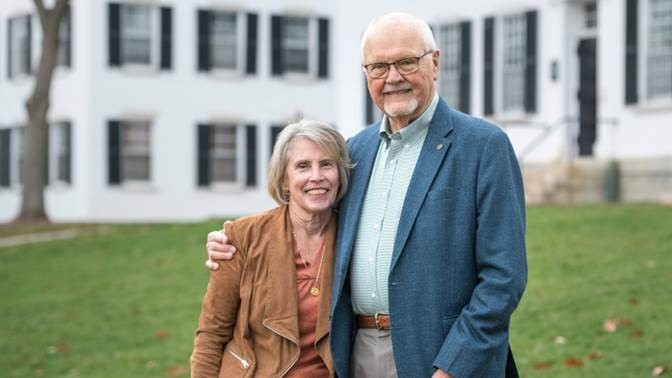 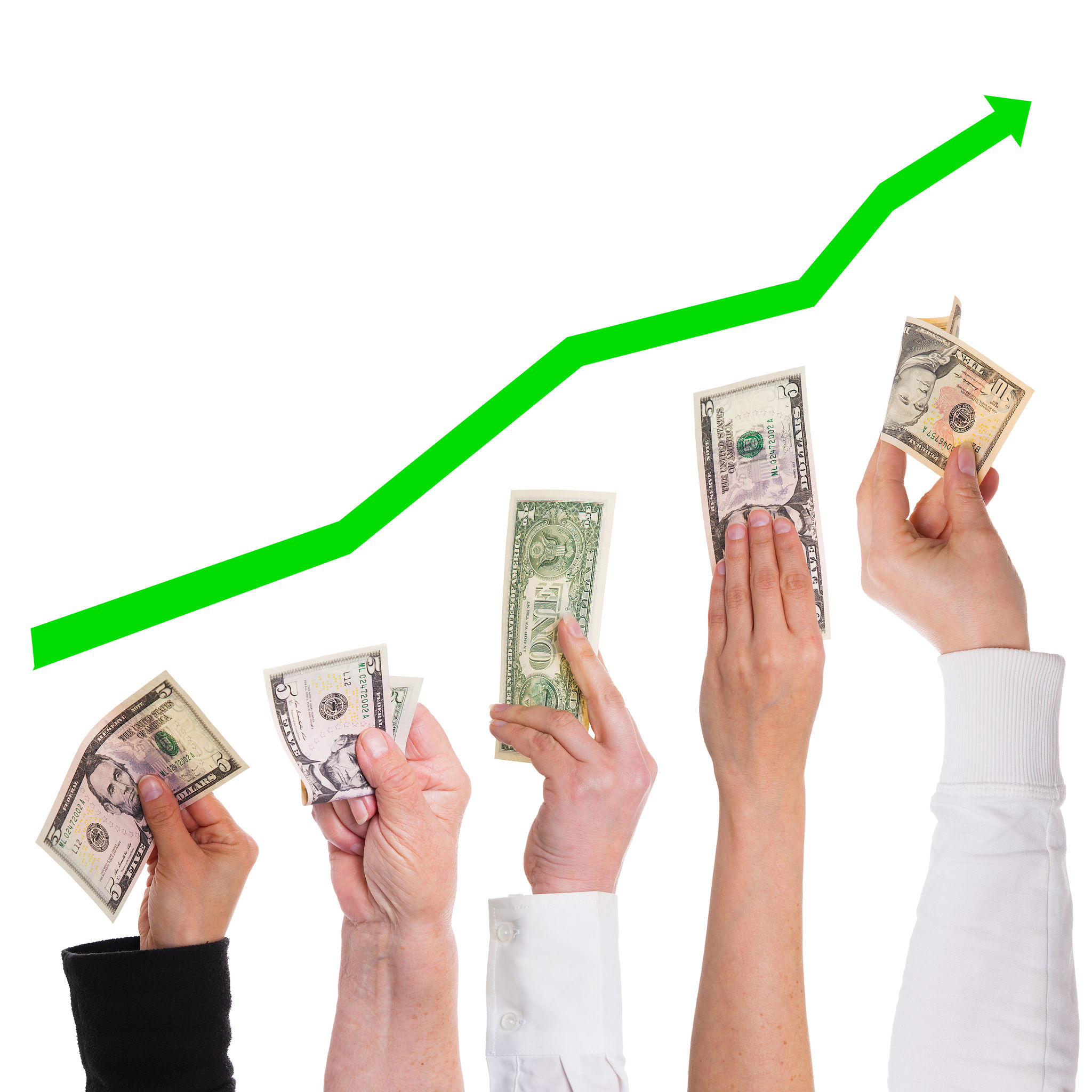